Renegades Want Back Into the World of Call of Duty Esports

The Detroit Renegades are looking to build a new Call of Duty team for the 2019 CWL Season.

Detroit Renegades general manager Shahrukh “Shark” Panjwani published a Tweet on August 29th revealing that the organization is looking to sign a Call of Duty esports team for the upcoming 2019 World League.

Shark implored the game’s top players to inquire, regardless of their current location or situation. 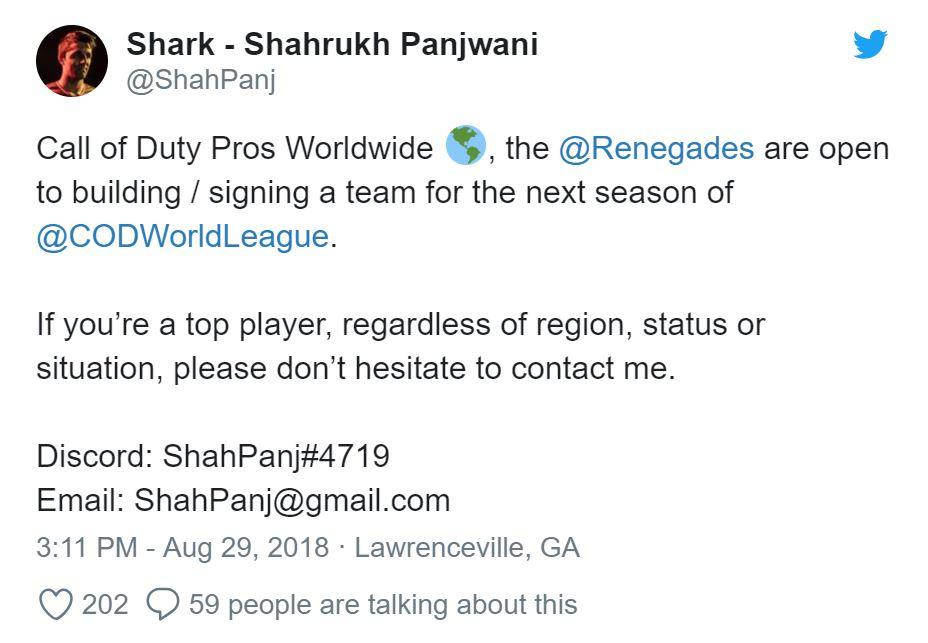 The Renegades’ latest casting call follows their break from the 2018 season, as well as their formation of a brand-new Fortnite team, Twinsanity.

The team previously participated in the CWL’s 2016 and 2017 seasons, and it is clear that they want back into what has become a massively growing esport, with this past season featuring a $4.5 million total prize pool.

With current teams in Injustice 2, Super Smash Brothers 4, Rocket League, and CS:GO, a Call of Duty squad would make another fitting addition to the organization.

Shark likewise implied that the Renegades would be open to acquiring a Gears of War 4, team, as well – provided it works.

Previously, the Renegades employed Call of Duty players from throughout the United States and Canada, including Diabolic, Ivy, Lawless, and KiLLa. Now, it seems the group is open to players from anywhere in the world in an effort to bolster their squad for the upcoming season.