As the debate over moving to 5v5 for competitive CoD continues, owner of OpTic Gaming has revealed he is on the side of change, arguing with 4v4 proponent, Patrick “ACHES” Price.

With public matches in Black Ops 4 shrinking to 5v5 from the tradition 6v6, there has been rumors that competitive play will attempt to smooth the lines between casual and competitive, by adding another player.

Making CoD esports 5v5 would be one of the more drastic changes to the scene, probably ever, and would shake up roster decisions immeasurably, but not everyone is against the idea.

ACHES, a veteran in the scene and now a 2x World Champion, has been tweeting daily that competitive should remain 4v4, but Hector “H3CZ” Rodriguez is an advocate for 5v5, and debated with ACHES on the matter.

Starting off with a simple ‘I disagree’, ACHES retorted by saying that “most non-players do”, as ACHES’ believes the negative impacts would effect players more than anyone else. 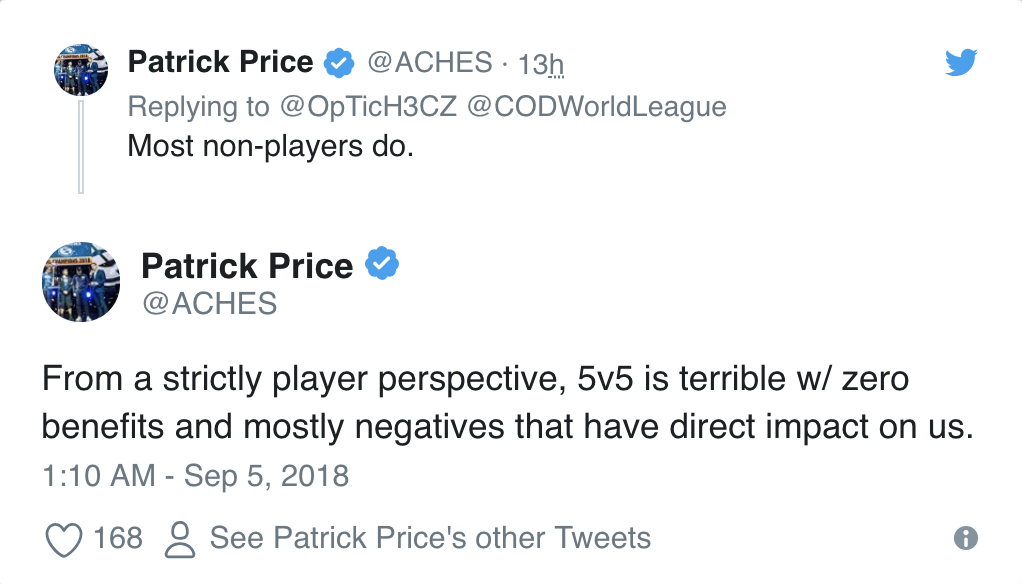 H3CZ seemed to understand where ACHES was coming from on this point, but said that if the change 5v5 came, he would be one of the first to point out the negatives and have them remedied – for example splitting prize pools five ways instead of four, and reduced player salaries to pay an extra player. 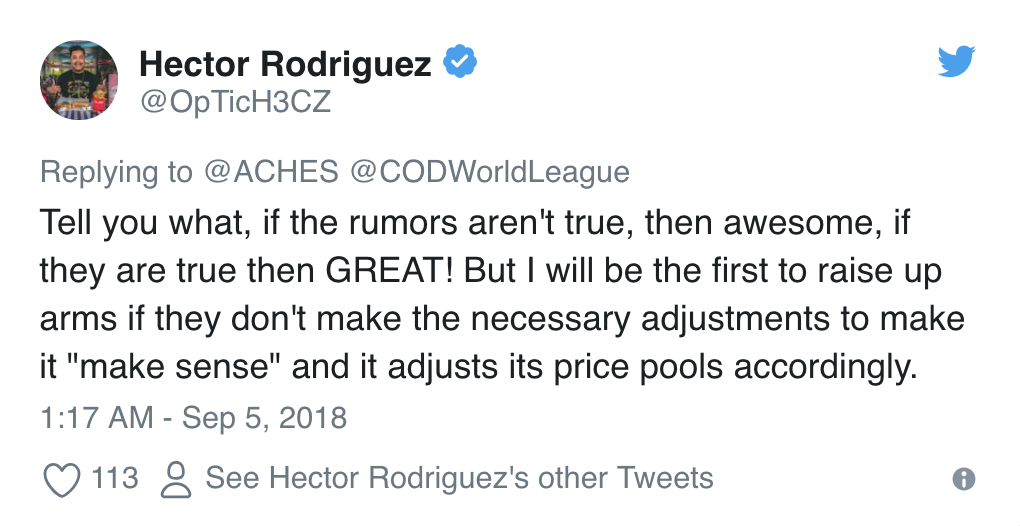 But ACHES wasn’t only referring to reduced prize pools, as he also feels the lateness of the announcement – if it is made – would be detrimental to both players and organizations. 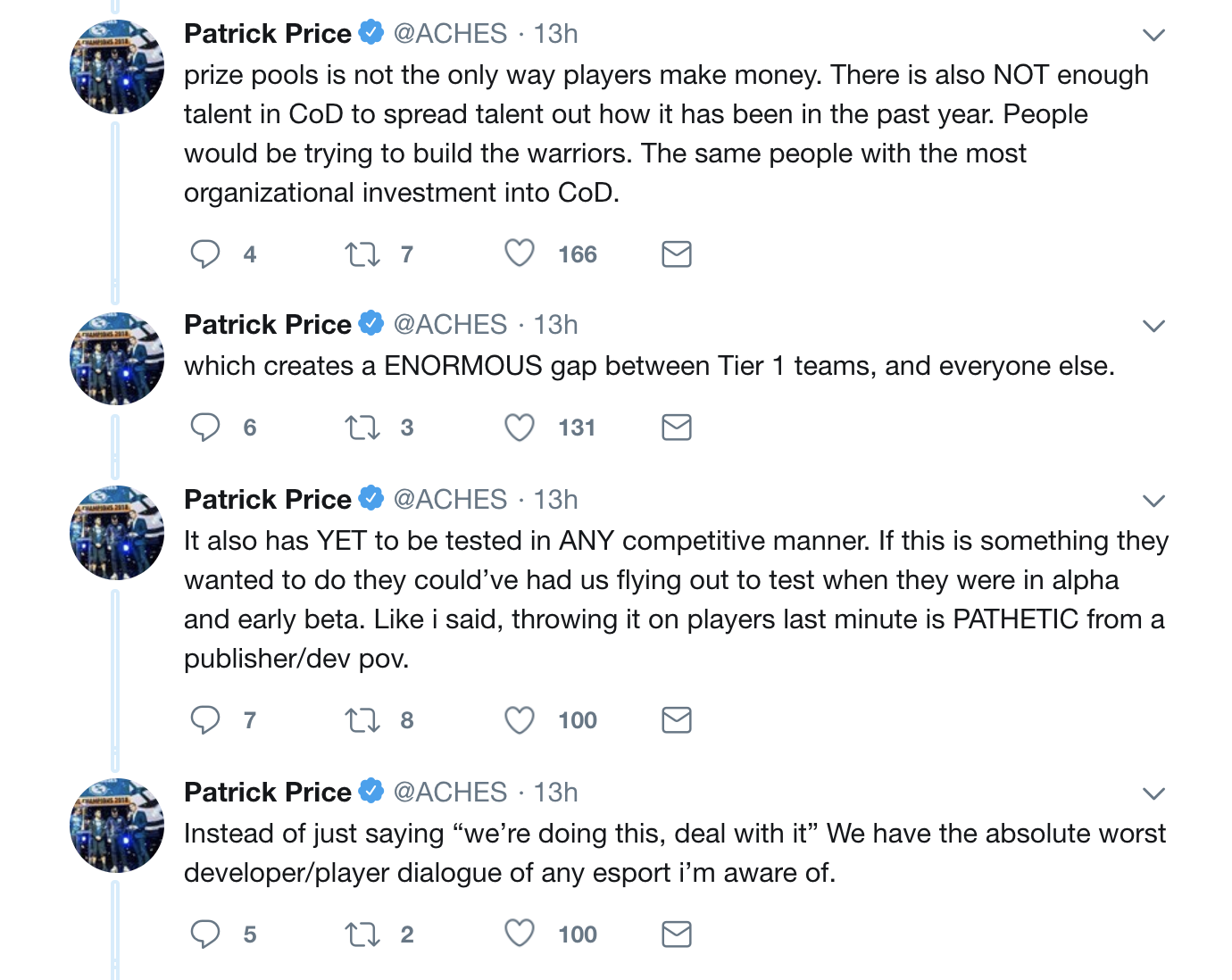 H3CZ wanted to call it evens there and wait for an official announcement before debating further, but maintained that he still wants to see the shift to 5v5.

He agreed however, that the “dialogue” between the decision makers and those who are affected by said decisions, is poor.

YouTuber Drift0r also picked up on this point, voicing concern that players and organizations had been left in the dark up until this point, on whether the upcoming season will be played 5v5 or 4v4. 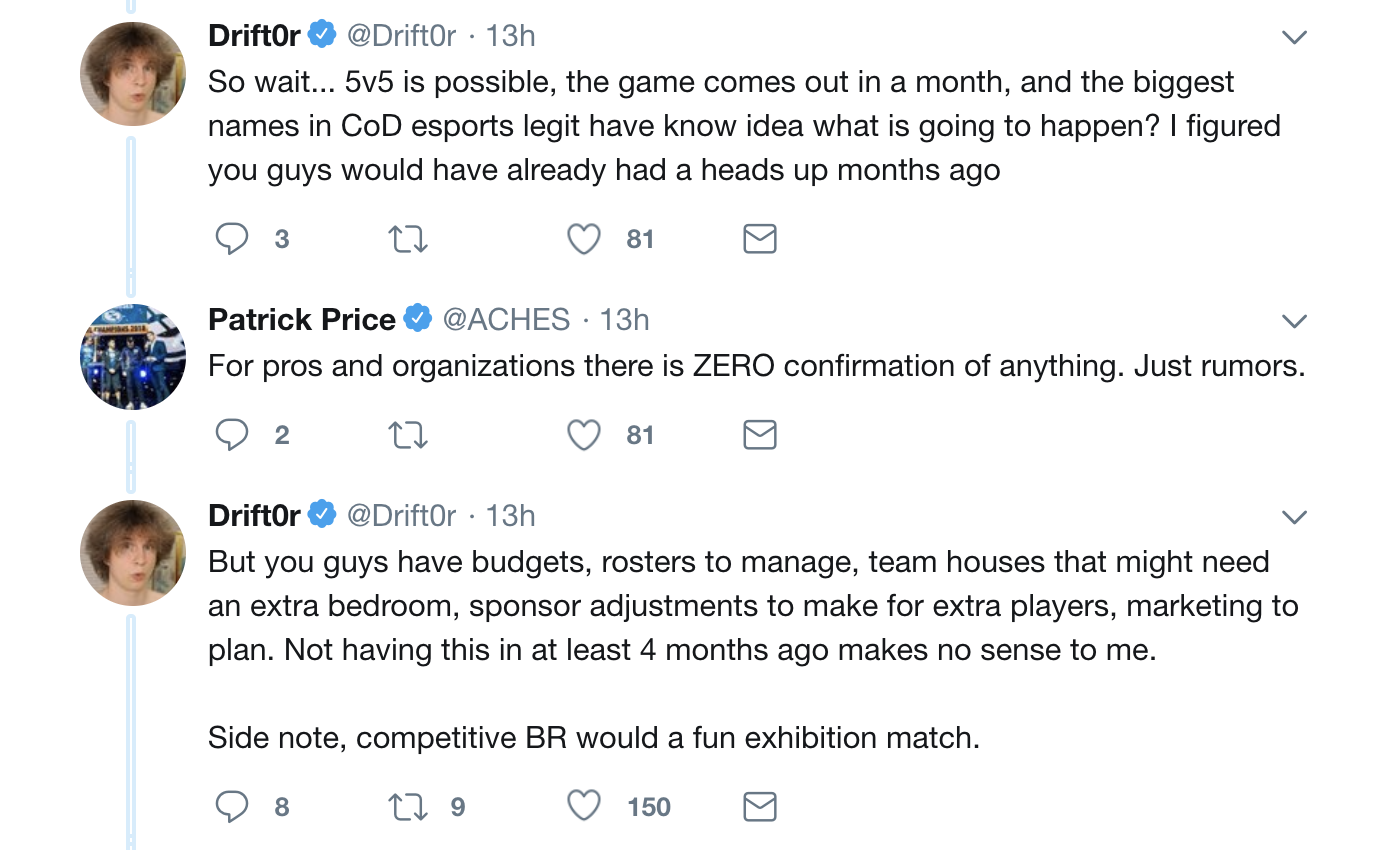 The esports reveal live stream for Black Ops 4 will take place on September 19, live from Treyarch Studios, and the competitive community is expecting to get a lot of answers then.

The game itself releases on October 12, giving players and teams just less than a month before the game drops to make adjustments, should any major changes be announced.

However, the first major event of the season is not until December 7, CWL Vegas, so there will be more time after release to make changes too.