It looks like Call of Duty: Black Ops 4 could feature remakes of some of the most popular maps in the history of the franchise, including Raid and Firing Range.

Black Ops 4 is still four months away from being released but the excitement and anticipation surrounding it is already reaching fever pitch.

Add numerous leaks into the equation and hardcore Call of Duty fans certainly have a lot to talk about as they wait for October 12th to finally arrive.

One leak that has everyone talking seems to show a total of 17 potential multiplayer maps, including remakes of some Black Ops favorites likes Raid, Standoff, Firing Range, and Nuketown.

The leak comes from a TwoEpicBuddies YouTube video. Best known for their Fortnite Battle Royale related data mining, TwoEpicBuddies tend to be on the money with their information so there is certainly an air of legitimacy to the list.

It would be huge news if the list of 17 maps means that the game will come with 17 playable multiplayer maps on release, but early DLC maps have been seen in the release. However, files of previous Call of Duty titles so don’t get your hopes up too much. 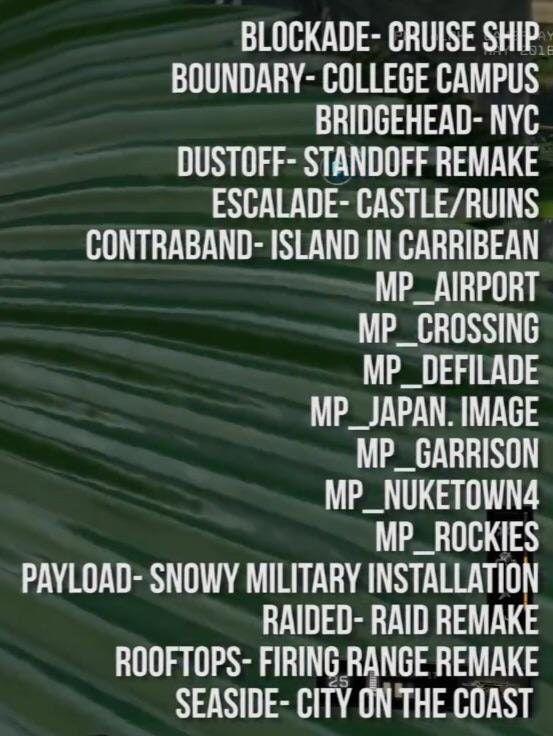 While Nuketown might be the most known and loved map from the Black Ops series for casual fans, the prospect of Raid, Firing Range, and Standoff remakes will leave competitive fans and players drooling.

Neither Treyarch or Activision have commented on the speculation but some community members have suggested that more information could be revealed at CWL Anaheim from June 15th – 17th after it was revealed that the multiplayer would be playable at the $200,000 event.

The TwoEpicBuddies video can be found below.