Daniel ‘KEEMSTAR’ Keem has announced that he would be open to running a weekly Call of Duty: Black Ops 4 tournament if he receives the right support.

The Drama Alert creator and host has well and truly immersed himself in the world of tournament organization in 2018 with the likes of Friday Fortnite and the $100K Realm Royale events, and seems open to expanding into Call of Duty.

In response to numerous questions about whether he would be running Black Ops 4 competitions, he said that he was enjoying the beta and knows the community would like to see it.

However, the YouTube star stipulated that the the final decision will come down to whether Treyarch or a third party company provides him with a budget to run the event. 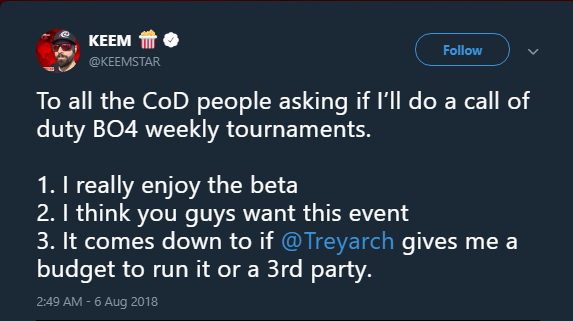 The round of the Black Ops 4 multiplayer beta, which started on August 3 on for PlayStation 4 players, has been well received by the Call of Duty community.

Another is due to run from August 10 to 13 on PlayStation 4, Xbox One and PC, and excitement for the game’s official release is beginning to ramp up to fever pitch.

There is a beta for the all new Blackout Battle Royale mode due to begin in September – another mode that KEEMSTAR might consider running events on.

KEEMSTAR’s statement is sure to catch the eye of a number of potential sponsors if Treyarch isn’t open to the idea, so don’t be surprised if you see an official announcement in the near future.

TikToker under fire with ‘animal abuse’ allegations after controversial videos