How Treyarch can keep Black Ops 4 Multiplayer fresh and fun

The great thing about Call of Duty titles, from a developer’s perspective, is that they really have to be kept fresh and fun for only a year before the next title releases.

Surprisingly, this itself has proven to be a difficult task in recent years as the player-base’s general interest has considerably waned in the last few months of each game’s cycle and players have made it a trend to turn to older titles to satisfy their CoD cravings.

This means that Treyarch have a lot of work on their hands if they want to keep the Black Ops 4 gaming experience fresh and fun for its whole cycle, especially the Multiplayer

With this in mind, Reddit user ‘Hydrox2016,’ has put together a list of things that Treyarch can do to have players continue playing Multiplayer for as long as possible.

His list starts off with proposing Daily Contracts, similar to WWII and Black Ops 4, which would encourage players to dry different game modes and complete challenges, for which they would get awarded currency credits. 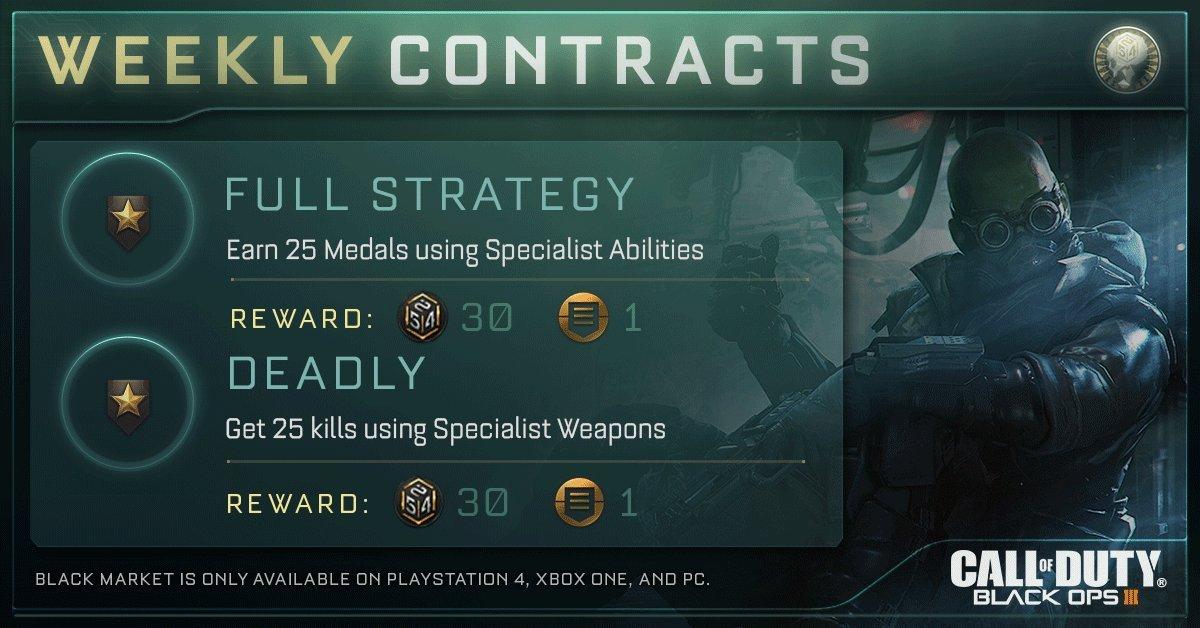 Cryptokeys were a huge part of the Black Ops 3 experience, and adding a similar currency system to Black Ops 4 would definitely get players playing longer.

These credits could then be used to purchase weapon variants, cosmetic items, and more, and these pool of items would be continuously updated to gives players always something to work towards.

The user then suggests that a free weapon be added into the game for everyone to have, as well as more content in the Contraband streams that would be worth grinding for, such as Operator Mods for weapons that don’t have them.

Prestige-exclusive items is next on the list, and these would include skins, weapons, Mastercrafts, and other items that players would be incentiviced to level up and Prestige for. 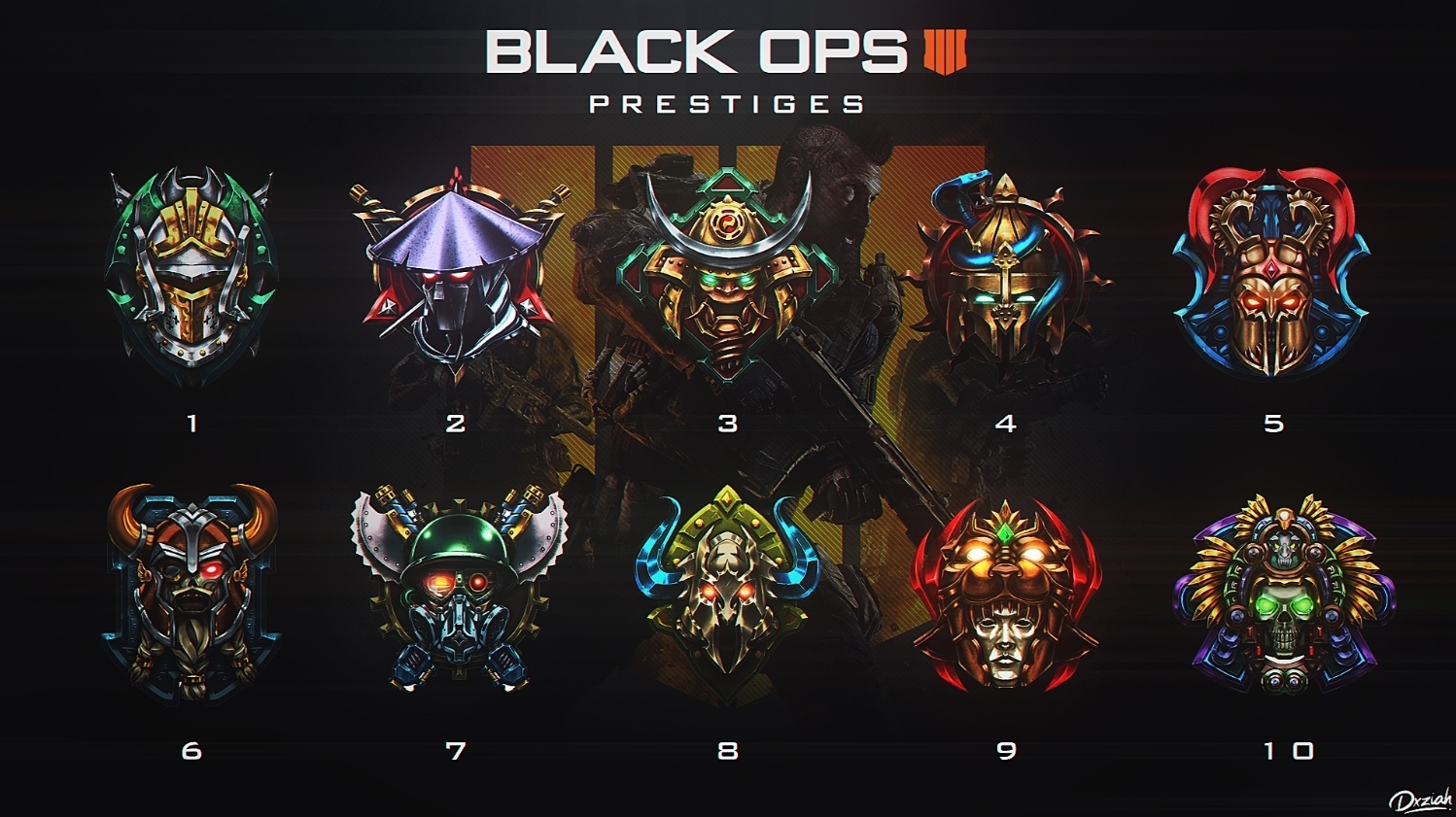 With so many Prestige levels in Black Ops 4, having exclusive items and weapons would entice players to level up and hit different Prestiges.

He rounds up the list by proposing that Treyarch should bring back a lot of the popular content from previous CoD titles, such as score-streaks, game modes, Specialists, and more.

He also suggests that ‘No Specialist’ playlists be added so that players can enjoy the Multiplayer without having to deal with Specialists. This has been a commonly suggested concept that players have been asking for since the game’s release. 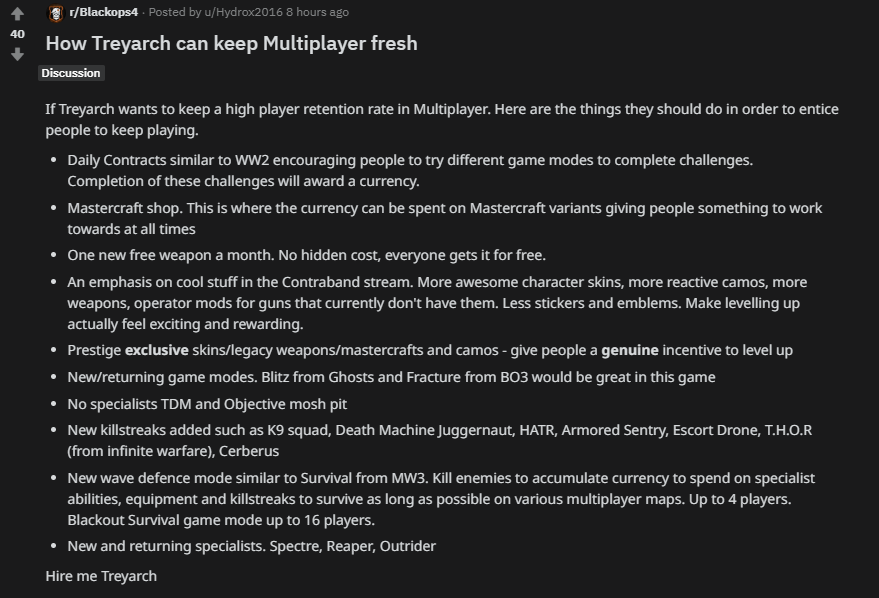 One huge thing that the user did not mention in this list is League Play, which has arguable been the most oft-asked for in-game content since Black Ops 4 released in October.

The addition of League Play should definitely improve the play-ability of Multiplayer and keep it popular for as long as possible.