Activision and Treyarch have revealed an early surprise for the Call of Duty community – a PlayStation 4-exclusive Open Alpha for the upcoming Black Ops Cold War, and we’ve got everything you need to know.

With Black Ops Cold War set to hit shelves on November 13, and its Open Beta kicking off on October 8, Call of Duty fans have been waiting in anticipation to get their hands on the series’ 2020 entry.

Thanks to Sony’s ongoing exclusivity agreement with Activision, those on PlayStation 4 can try the game’s multiplayer almost a whole month early when the Open Alpha goes live.

This was announced during the PlayStation 5 Showcase event on September 16:

When is the Black Ops Cold War PS4 Alpha?

The Black Ops Cold War Open Alpha will begin on Friday, September 18 and will conclude at the same time on Monday, September 20, giving players a whole weekend to try it out.

Furthermore, Activision have announced that users can begin preloading the game on Thursday, September 17 at 8 AM PT / 11 AM ET on their PS4, in order to have it downloaded and ready to go once the Alpha begins.

The file size for the download is set at around 25 GB and should pop up on the PS Store right around the time that the pre-load window opens.

Treyarch have confirmed that three traditional game modes from Call of Duty will be included in the Alpha, with two maps designed exclusively for 12v12 play.

Team Deathmatch is a staple for fans of the legendary FPS title, so it’s no surprise that it’s included, while the variant mode Kill Confirmed is also part of the rotation, a TDM-style mode where you collect the dog tags of fallen players. The objective-based mode Domination will also be included for the Alpha’s release. Finally, Hardpoint will be coming halfway through BOCW’s Alpha on September 19. The three maps we’ll be playing on are Satellite, Miami, and Moscow, all three of which were seen in the trailer.

Miami is one of two maps included in the multiplayer Alpha.

Players will also get their first taste of Combined Arms: Domination, a 12v12 twist on the traditional mode complete with vehicles and larger maps. Tanks, Snowmobiles, Wakerunners, and more allow players to zoom across the map with some serious firepower. Combined Arms: Domination will take place on two maps as well, Armada and Crossroads, both of which were also seen in the worldwide reveal.

Make sure to check out our page on the full list of all of the weapons, maps, modes, weapons, perks, and everything else that was confirmed during the MP reveal.

In addition, it’s also been confirmed by Treyarch Game Designer Tony Flame that the Alpha will have everything unlocked from Day 1 so that players don’t have to worry about leveling up in only two days time.

Do you stay up late at night thinking “But how long will it take to level up in the Cold War Alpha? What if Ninja Perk is locked at max rank? What’s the Time 2 Play for AK47u?”

Your time is valuable, so everything in Alpha from CaC to Scorestreaks is unlocked and yours to enjoy

Do I need to pre-order or get a code?

This is an Open Alpha, available to everyone on PlayStation 4, so no, you will not need to pre-order BOCW or get any code in order to play it. The only requirement is that you have a PS4 and an internet connection; it doesn’t even require a PlayStation Plus (PS+) subscription.

However, if you want to play the early access beta that’s going to be available in October, you will need to pre-order one of the digital versions of the game.

Will there be a Black Ops Cold War Alpha for Xbox One and PC?

Unfortunately, no. This Open Alpha is part of Sony’s exclusivity agreement with Activision, so only those on PS4 can play it. This also affects the beta as well, since PlayStation will be getting access to it a week before Xbox and PC.

The earliest Xbox One and PC users can try out the game is during the early access period on October 15, and only if you pre-ordered any of the digital versions. The free portion of the beta will be available on all platforms between October 17-19. 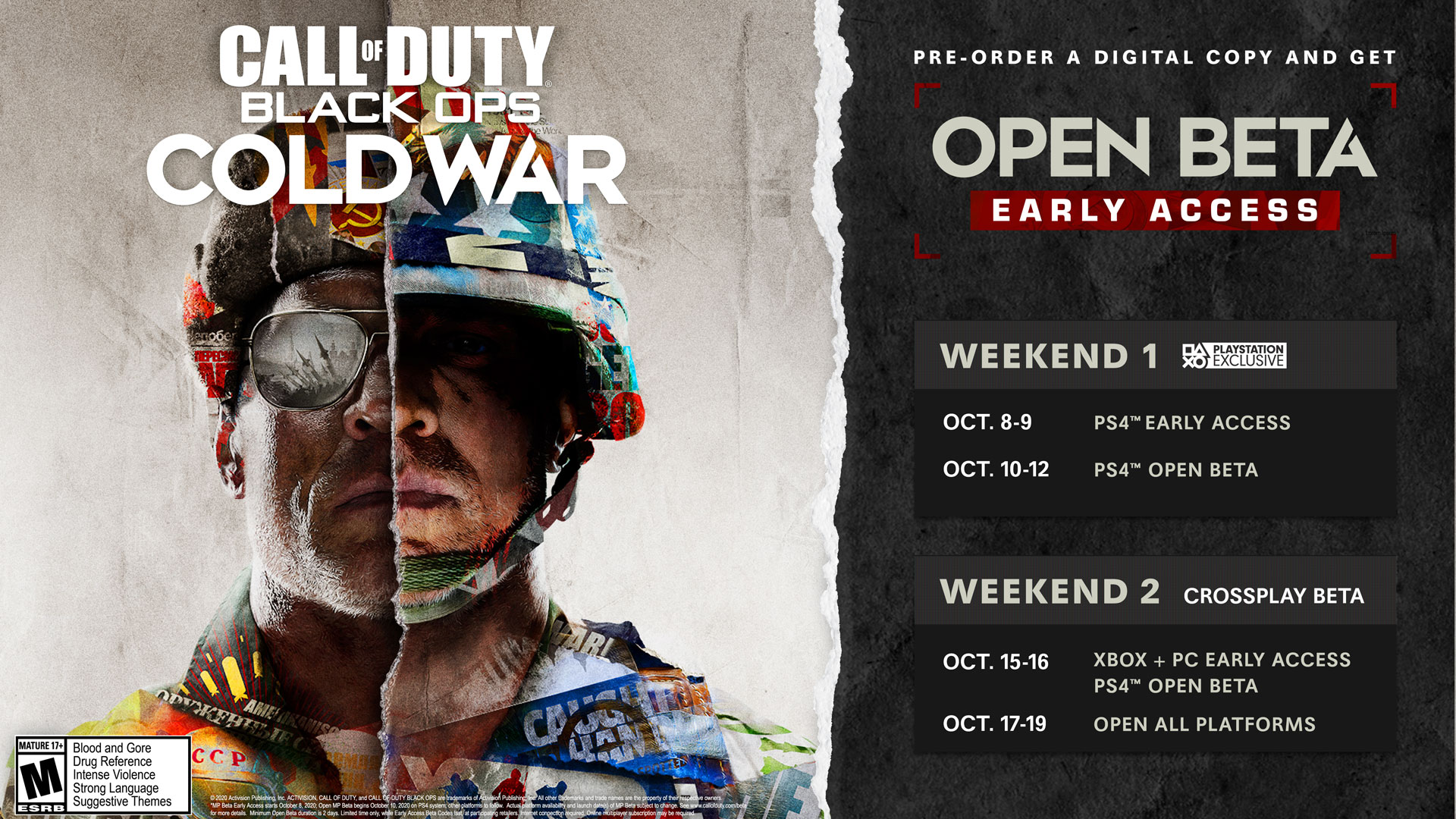 Call of Duty: Black Ops Cold War will be releasing on November 13 for the PS4, Xbox One, and PC, with the PS5 and Xbox Series X/S versions being available as soon as the next-gen consoles roll out.