How and When to Play the CoD: Black Ops 4 PC Blackout Beta - Dexerto
Call of Duty

How and When to Play the CoD: Black Ops 4 PC Blackout Beta

Treyarch has officially announced the time and date for the release of the CoD: Black Ops 4 Blackout Beta on PC.

The PC Beta will first be available to those who have pre-ordered Black Ops 4, and then will be open to everyone thereafter.

The Beta for Blackout on PC will officially launch on September 14 at 10 AM PT / 1 PM ET, but will only be accessible by those who have pre-purchased any digital version of the game.

After the 24 hour period of private access, the Beta will become available to everyone on September 15 at 10 AM PT / 1 PM ET, and players will need a valid Battle.net account to access it. 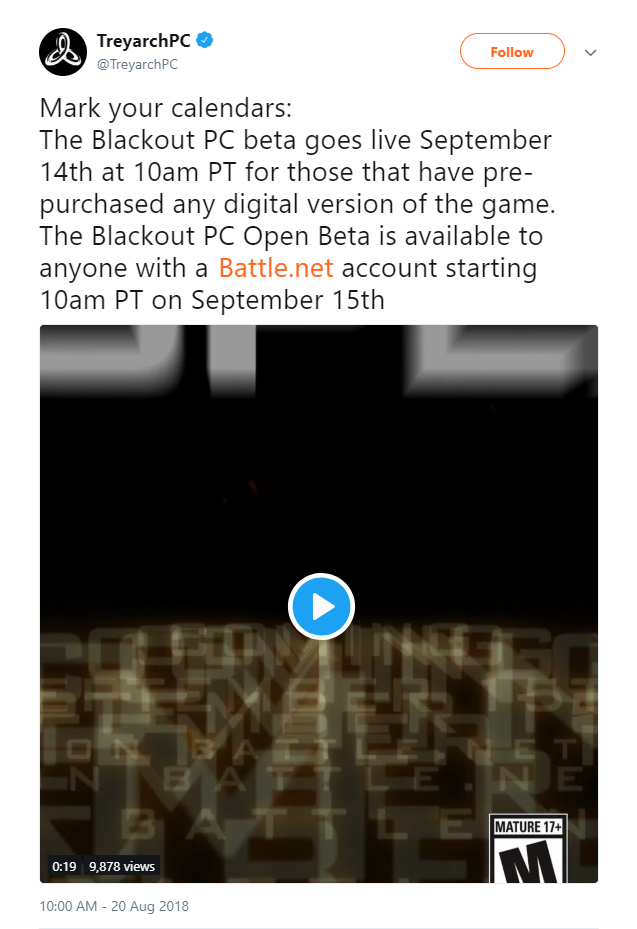 Treyarch had announced on August 14 that the Blackout Beta would first be available on the Playstation 4, just as with the Multiplayer Beta.

PS4 players can try out the game mode starting September 10, but will need to have pre-ordered the game since the Beta will be Private Access only.

The starting date and time for the Beta on the Xbox One has also now been announced, and, just like the PC beta, it will also be starting on the 14th.

Although not many specific details have yet been announced about Blackout, Treyarch has confirmed that it will have modes for Solos, Duos, and Quads.

Trailers for Blackout have hinted at various classic maps from the Black Ops series making an appearance on the battle royale map, as well as land, sea, and air based vehicles.