CompLexity Gaming were eliminated from the 2018 CWL Championships during the third day of competition, and the org is already looking ahead to the upcoming Black Ops 4 season.

With the next Call of Duty title scheduled to be released mid-October, compLexity has close to two months to assemble their envisioned roster.

Just after the team lost to Red Reserve in the first round of the Losers Bracket, coL CEO and Founder Jason Lake sent out a tweet thanking his players and team coach for all their hard work.

He followed that up with another tweet in which he made it clear that the org would be “evaluating all options” for Black Ops 4 and welcomed any interested players to contact him. 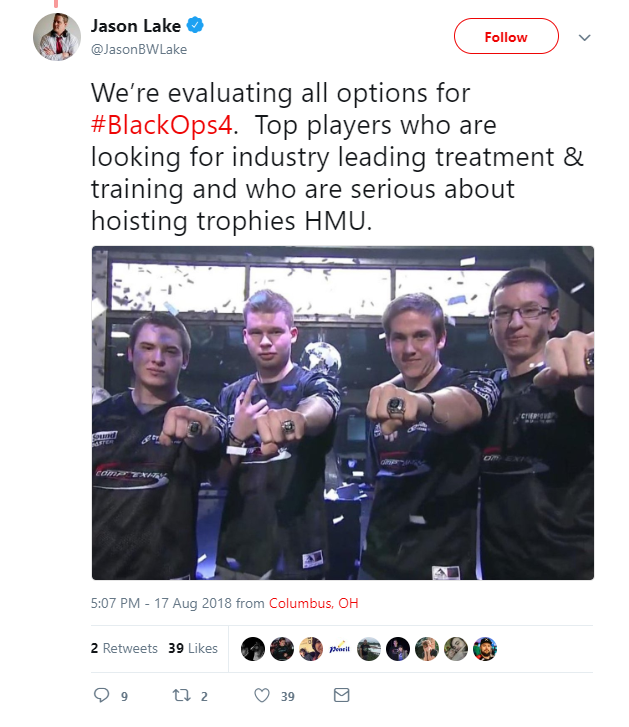 Included in the tweet above is a photo of compLexity’s World Championship roster from 2014, which featured Damon ‘Karma’ Barlow.

Perhaps the decision to tweet out that specific image is a coincidence, but it was shortly followed by a cryptic tweet sent from current Brandon ‘Dashy’ Otell, coL’s standout player this season.

Soon thereafter, some noticed that Karma had started following Jason Lake on Twitter, which can be seen by this screenshot.

Jason Lake’s and Dashy’s tweets, along with the screenshot above, has led many to believe that compLexity could be planning to go all out to sign their former star player this off-season.

With one or more players of their current roster likely to be on their way out, it would not be a stretch to imagine the three-time World Champion donning a red and black jersey once again.

However, all of this should be treated as nothing more than speculation, as Karma’s future is likely to be a hot topic over the next few months.

As of now, he is still a member of OpTic Gaming’s content creation team, and it is not out of the question that he could be brought back to the Greenwall’s CoD team for the Black Ops 4 season.