Unreleased Apex Legends characters may have already been revealed

Respawn Entertainment teased new characters to come in Apex Legends’ Deep Dive trailer, but clues from the Titanfall universe might have revealed the next Legends players can expect to play as.

Apex Legends released February 4 and has since taken the gaming world by storm for its polished gameplay and concise set of playable legends who each bring unique elements to the battlefield.

In a Reddit post, FrozenFroh connected some dots in Titanfall’s history that led to a sound theory of the next two characters being a a Simulacrum red-hooded pilot and Korean character named Talchum.

Apex Legends has only been out a week and they game is already hinting at a double character release. pic.twitter.com/203D1U2Kvd

Although the gameplay trailer showed two silhouetted characters from afar, FrozenFroh zoomed into the figures which revealed better clues to their identities.

The figure on the left seems to be a spritely humanoid who seems to fit the mold of a Titanfall 2 concept design for a robotic character. Some fans will know that Bloodhound was born out of an unused concept design, which makes the possibility of the Simulacrum soldier entering the game that much more plausible.

If FrozenFroh is correct, then the figure on the right has actually already been introduced in the Apex Legends world, first appearing in Pathfinder’s official art.

The character appears in a large banner that seems to be celebrating legends since it’s positioned above a larger poster of Wraith. The banners have Korean text that translates to Talchum, presumably the character’s name.

Further similarities in the poses, clothing, and more shown in the small clip and in the concept art paint a better, although loose, connection to the character’s identity. 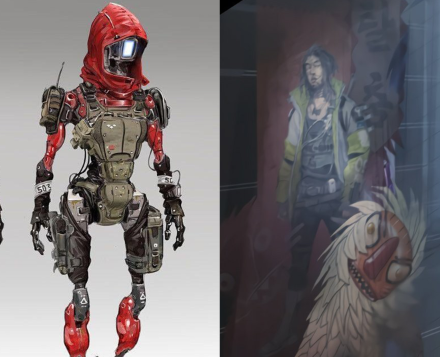 Images that led FrozenFroh to connect the dots to the new Apex Legends characters.

Respawn Entertainment has already confirmed more legends will be added to the fray, but players will just have to wait and see for more details as the game grows.