The Sword & Shield community was left reeling after Game Freak teased a new Pokemon for the eighth generation title. Trainers began to work on figuring out the monster’s identity, and some of the guesses are downright hilarious.

Pokemon entered its eighth generation with the release of Sword & Shield on Nintendo Switch. The latest in the long-running RPG series broke sales records and was met with rave reviews.

However four months after its release, players are still hungering for more. When Game Freak teased a new character coming to the game, imaginations went wild on who it could be – although some trainers went a little too far.

The Gen VIII Pokemon title came out in November 2019.

Many players have long beaten Pokemon Sword & Shield since its November 2019 release. Trainers are now in the post-game where they are trying to catch rare variants, and complete their Pokedex.

Game Freak also announced that for the first time ever, the franchise will be getting an Expansion Pass in two parts with The Isle of Armor and The Crown Tundra. However on February 14, they also teased a new Pokemon coming as well.

Posting on both their Facebook and Twitter accounts, the developer announced “New Pokemon discovered?! Stay tuned, Trainers.” The post also included a silhouette outline of an unknown monster.

The tease sent the community into a frenzy trying to guess who the new creature could possibly be. Over on the Pokemon subreddit, user ‘Reitsukai’ hilariously shared his nightmare fuel guess of it being a ‘Galarian Jynx.’

A Reddit user hilariously made a mockup for who the Pokemon could be.

Another user ‘Lenasai’ replied to the tweet, and photoshopped Sonic the Hedgehog’s iconic nemesis Dr Robotnik’s head on the body of the character. While funny, it oddly fits. Pokemon fan ‘IchigoOre115’ made a similar picture, but instead used X & Y’s villain Lysandre.

The Pokemon community had some pretty hilarious guesses as to who the new character could be.

While it’s unclear if they were joking or not, Twitch streamer ‘TAHK0’ pointed out that one of the characters from the upcoming ‘Pocket Monsters the Movie: Coco’ looks identical to the silhouette – particularly with the hair and wrist bands.

Could the latest Pokemon be related to the film that is coming out in July 2020 in Japan? It’s certainly possible. Although many seem to think the answer is more simple, like a G-Max Alakazam.

Regardless of what it ends up being, the Sword & Shield community has demonstrated they have a wild imagination. And if nothing else, it will fuel the fire for those that want to grow their Pokedex.

Pokemon Diamond & Pearl remake trended on Twitter on January 22 after celebrity judge Michelle Visage from RuPaul’s Drag Race posted a tweet about it that went viral.

As Pokemon heads towards its 25th anniversary in 2021, fans’ call for a remake of the 2006 titles Diamond & Pearl has never been stronger.

The community got an incredible ally, though, on January 21 when media star Michelle Visage “demanded” Game Freak release the highly desired project.

After a decade of waiting, Pokemon fans desperately want to return to the Sinnoh region to re-experience Diamond & Pearl. The topic of a remake trended on Twitter after a star judge from RuPaul’s Drag Race threw her support behind it.

Media personality Michelle Visage had millions talking about the Nintendo DS titles with her January 21 tweet. “i want a pokemon diamond pearl remake. nay, i DEMAND IT,” the star wrote to her hundreds of thousands of followers.

The post immediately took off on the social media platform as the Pokemon community reacted to her comments. At the time of writing, her call for the Gen IV re-release has over 16.4k likes.

i want a pokemon diamond pearl remake. nay, i DEMAND IT

The star’s tweet surprised fans who were excited over her love for the RPG. One fan wrote, “my mind has been blown. A drag race pokemon collab would be beyond cool.” Another user exclaimed, “Omg I didn’t know Michelle is a Pokemon fan.” Someone else tweeted, “I was not expecting Michelle Visage to post the most important tweet of the year. #justicefordiamondandpearl”. 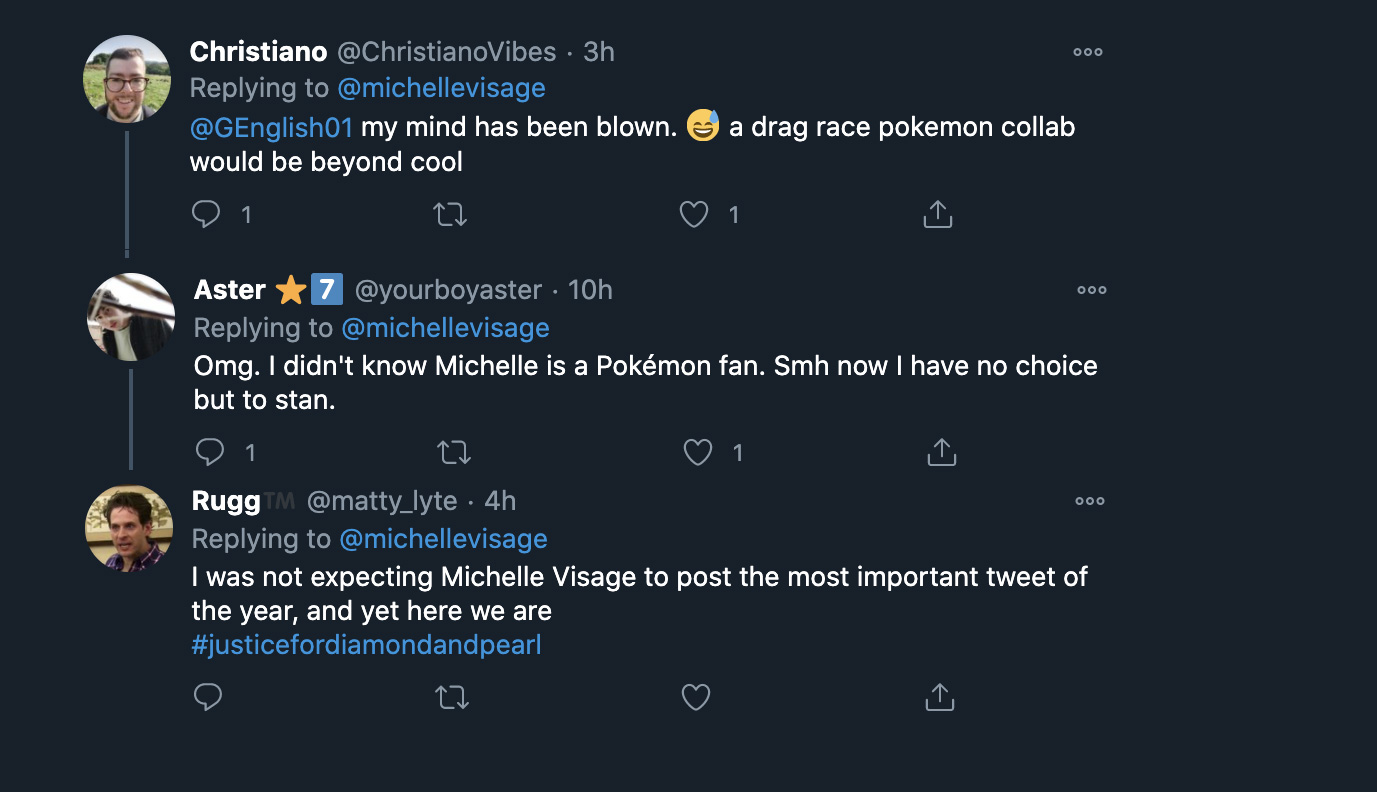 As for which Pokemon type she would use if she was a Gym Leader, Visage revealed she loves Fairy ‘mon. “CLEARLY a fairy type,” she said in response to the fan’s question. She also revealed her favorite Gen 4 starter is Piplup.

In early January, several leaks claimed that Game Freak is gearing up to announce a Diamond & Pearl remake for the series’ 25th anniversary. Only time will tell if the re-release actually comes to fruition.

The Sinnoh region title clearly has a massive fan base, if the viral tweet by Visage is anything to go off of. We can only hope that the next release will take us back to Gen IV.