Overwatch win rate stats reveal which heroes are proving the most successful after the September 17 update, patch 1.40, which made multiple hero balance changes.

Overwatch YouTuber OverwatchLimbo has compiled a list of the top heroes by win rate in each position since the arrival of the 1.40 patch, showing which are proving most successful at each rank on PC.

In conjunction with his previous list of the most successful heroes prior to the 1.40 patch, but after the introduction of role queue, the list not only gives insight into which heroes players might be best off picking, but also how the patch actually affected the top heroes in-game.

The most notable changes in patch 1.40 were nerfs to Symmetra, Zarya, and Sigma. Symmetra and Zarya had their primary fire nerfed, while Sigma had his entire kit adjusted slightly, with his Gravitic Flux cast time increased, Hyper Sphere damage reduced, but Accretion damage increased.

While the changes to Zarya and Sigma seem to have had some impact, they haven’t been knocked out of the top three entirely.

Where previously they shared the top spots at every rank, now Orisa has risen to be the clear top pick in most divisions. This trio still largely dominates across the board, however, with D.Va, Reinhardt, and Wrecking Ball making only one appearance each. 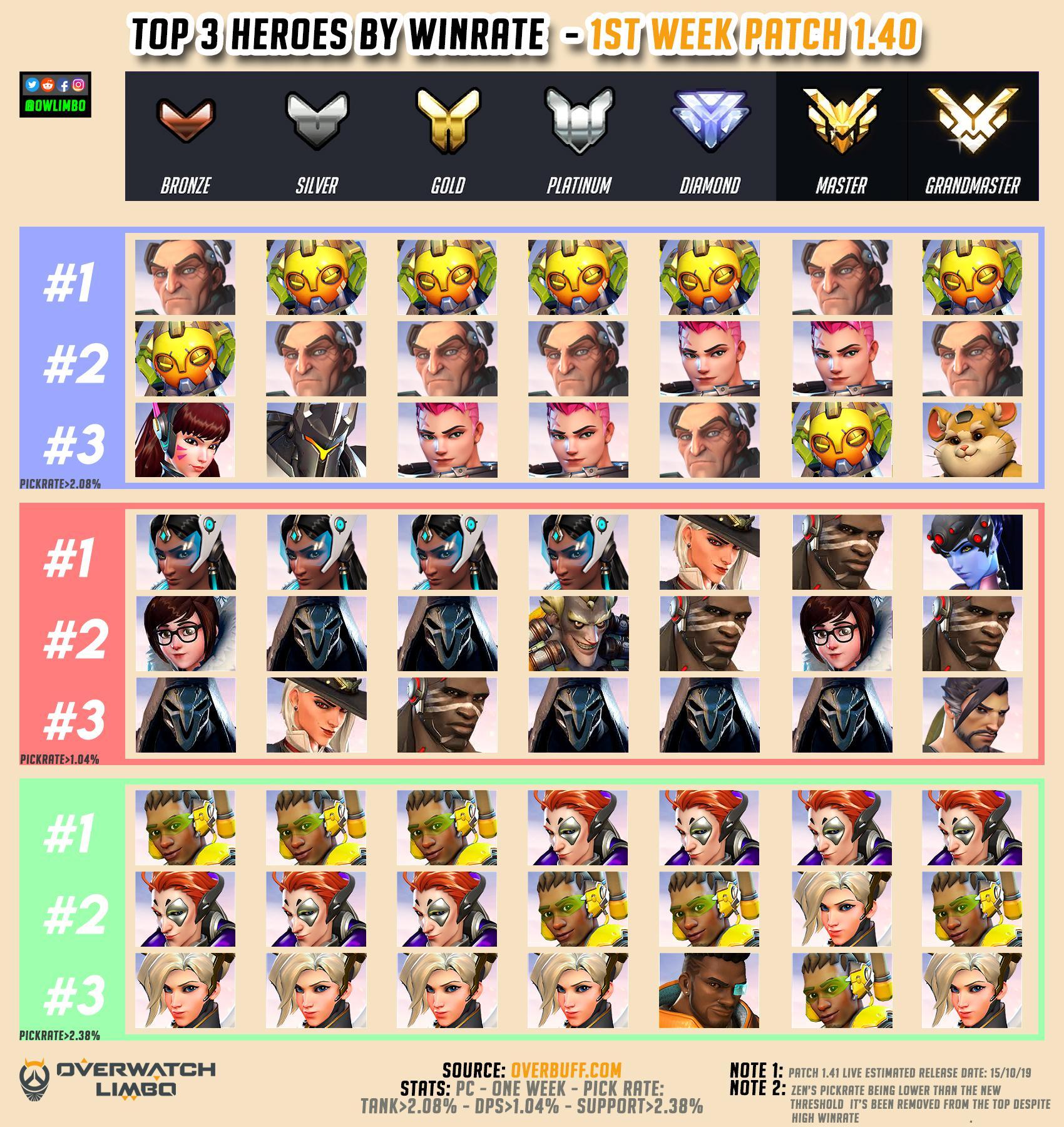 In the Damage role, the impact of the Symmetra nerfs can certainly be seen, although they only seem to have affected the higher ranks. From Bronze to Platinum, Symmetra still sits at the very top of the DPS, but from Diamond to Master she’s fallen out of the top three entirely.

Doomfist and Reaper still hold places in the top three at most ranks, while snipers Widowmaker and Hanzo both feature at Grandmaster. New appearances include Ashe, who tops the Diamond charts and also appears in Silver, and a lone Junkrat at Platinum.

In the Support role, both Lúcio and Moira remain dominant, but the third support in the mix has changed. Where Mercy previously only appeared at the Grandmaster rank, she’s now present everywhere except at Diamond. Meanwhile, Zenyatta has been pushed out of the top three entirely.

Sigma has been one of the top tank heroes since his release.
[ad name=”article5″]

Overwatch is due yet another shake-up in the near future, as the September 24 update to the PTR introduced several significant balance changes, including further nerfs to Sigma, nerfs to Doomfist, and buffs to Winston.

When that patch arrives on the live servers remains to be seen, although there’s typically a delay of a few weeks at least between significant changes hitting the PTR and moving to the live game.