Rockstar Games have revealed their first major update of 2020 for Grand Theft Auto 5’s Online game mode, adding a brand new car to the Lucky Wheel and a whole host of other things as well.

GTA Online players were given a treat over the festive period as the whole map was once again covered in snow for winter. Alongside that was a redeemable free New Year’s gift and one of the game’s most popular vehicles returned to the game with a weaponized spin to it.

Now, though, yet another list of cool bonus content has been revealed by the game’s developers – including new vehicles, rewards and more. There’s a lot to unpack, so let’s jump right into it. 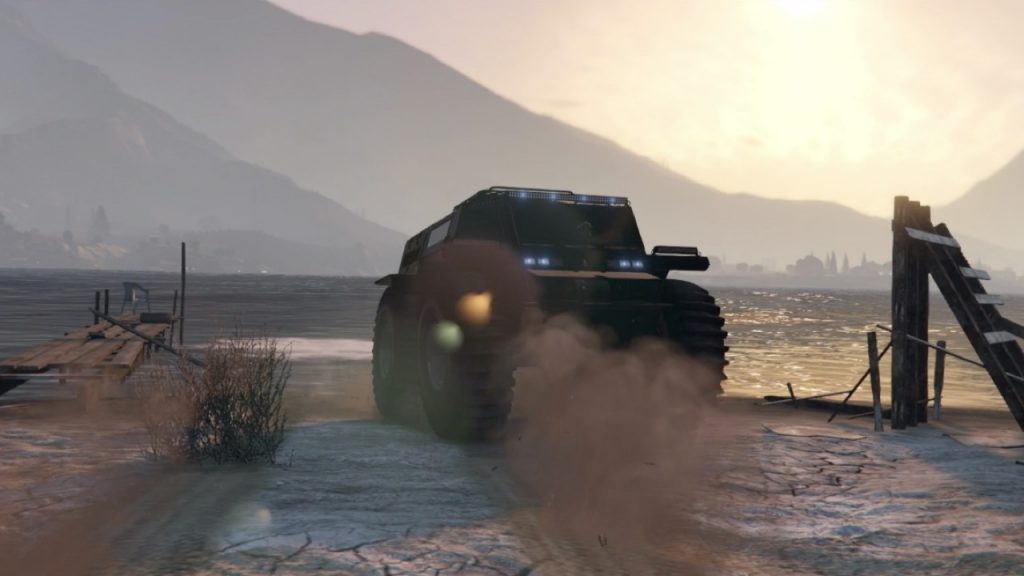 Here’s what the amphibious Rune Zhaba looks like in GTA, having come right out of the water.

If you’re looking for something that can run just as smoothly on rocks and sand that it can on the highways, the new Rune Zhaba could be a perfect addition to your GTA Online car collection.

Per this new update, the vehicle will be available to purchase from Warstock Cache & Carry for a hefty $2,400,000 in-game. It’s like nothing the game has ever seen before, though, which justifies the price a little bit.

Who wouldn’t want to drive right through water, sand, rocks and more without a care in the world? 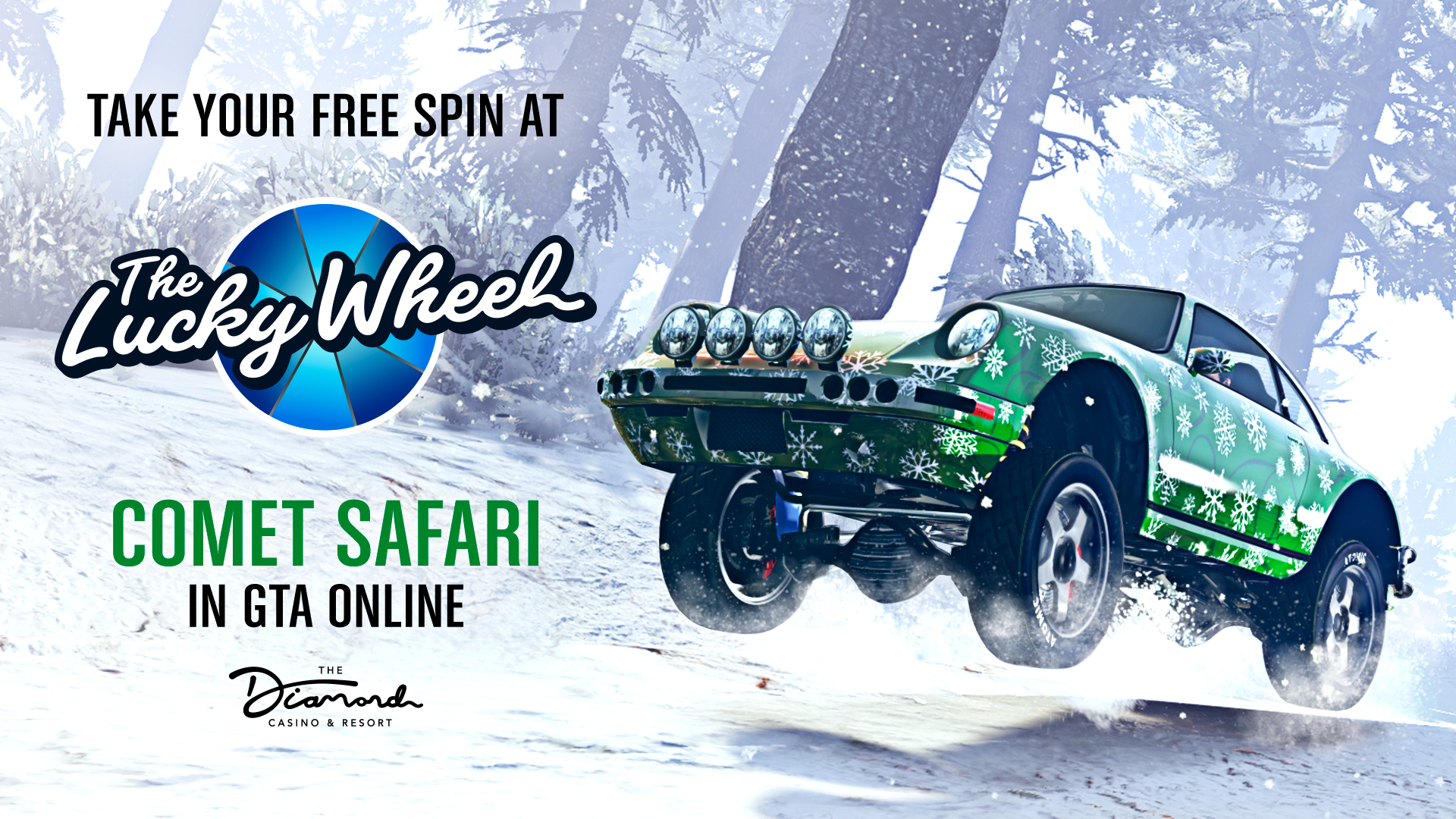 The Comet Safari vehicle is worth $710,000 but for a limited time, you could get ahold of one for free.

There’s another brand new car on the podium and GTA players who visit the Diamond Casino & Resort regularly will know exactly how to get it – take a spin of the Lucky Wheel.

It’s a free game that members of the game’s community can play once a day for free. Rewards on the Lucky Wheel include the grand prize, which in this case would be the customized Pfister Comet Safari, as well as in-game cash bonuses, cosmetics and more. 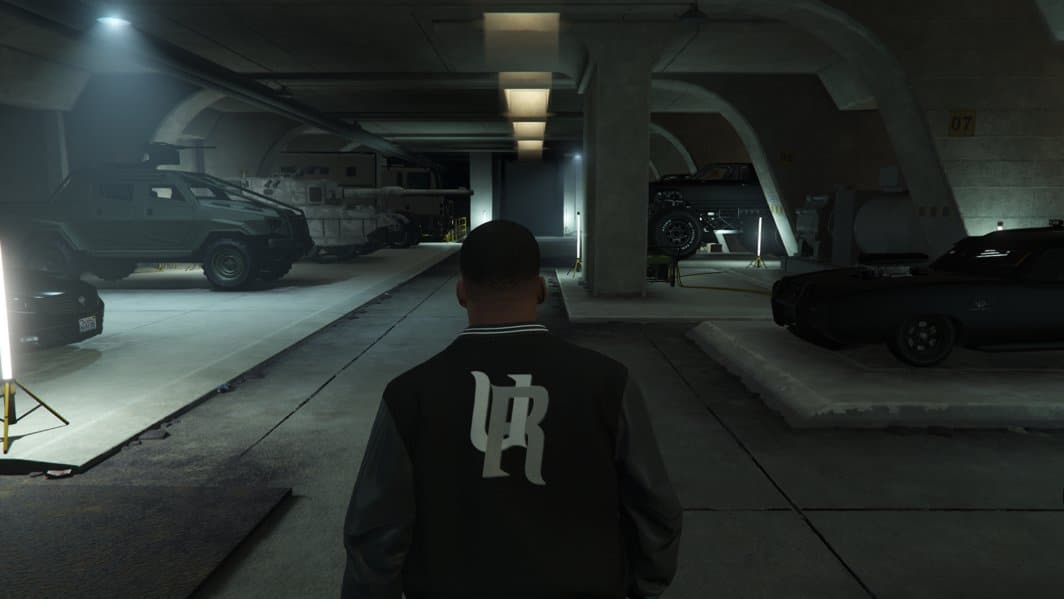 Get involved with Bunker Series and more in GTA Online to receive cash bonuses.

There are a number of New Year bonuses for players to grab in early 2020, including triple rewards on Freemode events such as Hunt the Beast, King of the Castle, and Criminal Damage. Aside from that, there’s also a cosmetic gift for players to claim.

“Anyone who plays GTA Online before January 8th will still receive the “It’s a Wrap” Livery for their Comet Safari to bring in the New Year,” Rockstar Games announced in a blog post on January 3.

The same announcement also states that players with an entrepreneurial skillset and playing Business Battles will receive double payouts until January 8, and the same goes for Bunker Series.

There’s a boat load of new discounts available via this update, on both properties and vehicles – as is normally the case.

As the list shows below, you can get up to 35% off some of the most valuable business locations in the game – including the Nightclub, Nightclub Garage and more. 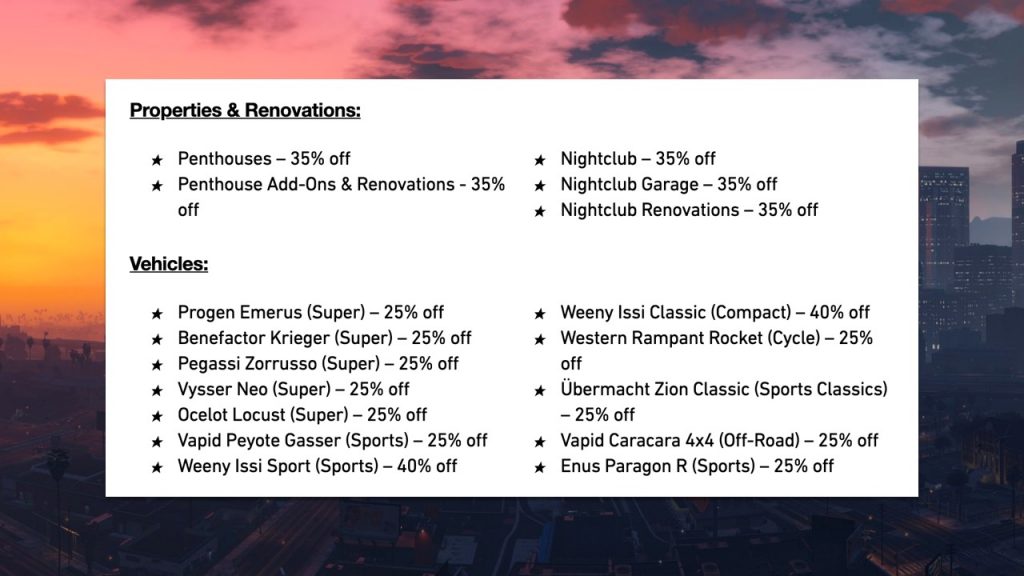 Here’s everything that’s discounted for this week in GTA Online.

Those who have linked their Rockstar Social Club and Twitch Prime accounts will get a further 10% discount on everything included in the list, but that’s not all.

If you would like to get your hands on a Pixel Pete’s Arcade property in Paleto Bay, Twitch Prime members get that free of charge too. Those who have already purchased the property before linking their accounts are also eligible for a rebate, which will be given 72 hours after making the purchase.

So, there you have it! That’s everything included in this week’s GTA Online content update. Hopefully it won’t be long before you’re riding around in the amphibious car and purchasing some properties with the New Year’s bonuses.