Many GTA Online players will be aware that Rockstar Games have added a brand new Open Wheel Racing series for them to jump into, but there are some handy tips that could give you an advantage.

The game’s developers added the new Formula 1-style races as part of their February 28 update, with two playable vehicles – the Progen PR4 and Ocelot R88 – being made available for all drivers to try out inside the confines of a race track.

If you would like to buy one of them to add to your garage, however, they are priced at $3,515,000 and $3,115,000 respectively, at Legendary Motorsport. That doesn’t matter in these races, though, as any player – no matter their budget – can drive them as part of the race.

So, let’s jump right into the tips.

GTA Online’s F1 races can be quite difficult for new starters.

Picking your car is the first step for any driver playing Open Wheel Racing, although there’s not much difference between the spec of the two F1 vehicles.

The PR4 has slightly better traction, as seen below, but the differences are very minimal. Honestly, either car will be just as effective.

Differences between PR4 & R88 in GTA 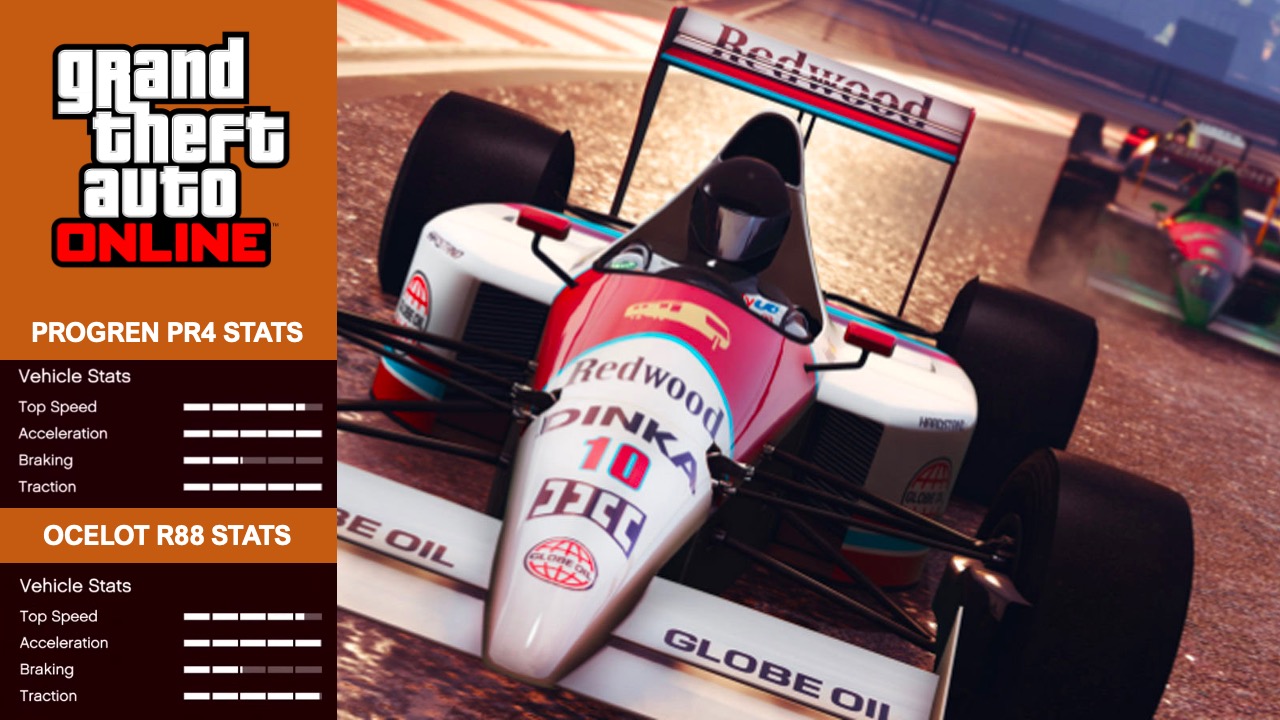 The PR4 just about edges the R88 in terms of traction, but that’s what people pay the big money for.

This is a really important step: picking the tires that will work for you.

There are three different types of tire in GTA Online’s Open Wheel Racing. These are Soft, Medium and Hard – each of which have their advantages and disadvantages, so it’s all about selecting the right one.

Pit stops are commonplace in any Formula 1 race and Rockstar have included the function in the Open Wheel series, too.

While they take up some valuable racing time, it would be a mistake – particularly with Soft or Medium tires – to completely ignore the need to turn into the pits at least once during the race. Those using Hard tires might get away with it, although they will lose the benefits of the other two.

You might feel like your opponents are going to blow you away, but not many will last the whole race without a stoppage so don’t worry about that.

Whether it’s real damage to the shell, tires running down or just a knock, making sure you’re in top condition will be of great benefit the longer the race goes on. Constantly monitoring your Vehicle Health and Tire Health is the key to using pits in a useful way.

You usually see the word ‘exploit’ and think that what’s going to be discussed shouldn’t be in the game, but the Kinetic Energy Recovery System (KERS) has been intentionally added to these races. Not using it effectively would be a massive mistake as it can offer a real help when chasing the pack.

You can come ripping out of the corners in GTA Online’s Formula 1 races when using the KERS boost system correctly.

Basically, this is a boost system but it can’t be used all of the time. You have to wait for your KERS bar (located at the bottom of your screen) to fill up, and then activate it, This can be done by clicking in the left analog stick on Xbox One and PlayStation 4, or by using the G key on PC platform.

In terms of the best times to use it, it really depends on the situation. Using it when your vehicle isn’t lined up properly will force it to spin out, but a good time to use KERS is just when exiting a corner. The boost only lasts a split second and can be filled up by braking around corners.

So, there you have it! Those are a few top tips to get you started on GTA Online’s Open Wheel Racing series. You never know, using the KERS system more effectively, picking the right tires, or taking that extra visit to the pit stop might be the difference between first place and fifth. Good luck!