Release Date and Time Announced for Fortnite’s v5.20 Update – What to Expect

Epic Games has announced the release date and time for the v5.20 Update in Fortnite: Battle Royale. 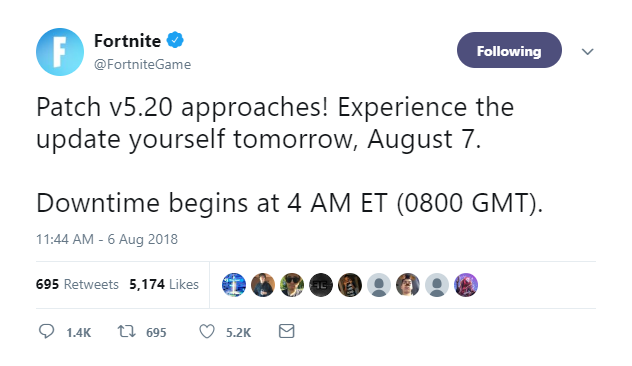 There is no way to know what exactly will be in the v5.20 Update since the Patch Notes for it are not released until the server downtime begins.

However, Epic will likely add the new Double Barrel Shotgun that has appeared as “Coming Soon” in the in-game Message of the Day screen.

Furthermore, as has been the case for most game updates, v5.20 should include a slew of brand new outfits skins, back blings, pickaxes, gliders, and emotes that will be released in the Item Shop in the coming days and weeks.

The names of these new cosmetic items have already been discovered, and data miners will very likely sift through any new game files and leak images and other details about them in the hours following when the update goes live.