Fortnite Season 6, Week 3 challenges and how to complete them - Dexerto
Fortnite

Fortnite Season 6, Week 3 challenges and how to complete them

Believe it or not, Week 3 of Season 6 in Fortnite Battle Royale is already upon us, and that means that the third set of weekly challenges are also set to go live.

Weeks 1 and 2 provided players with three free challenges and four that were exclusive to owners of the Season 6 Battle Pass, much like we saw throughout Season 5.

The official Week 3 challenges have just gone live, and there are a few key differences to the ones that data miners leaked!

The official Week 3, Season 6 challenges are as follows: 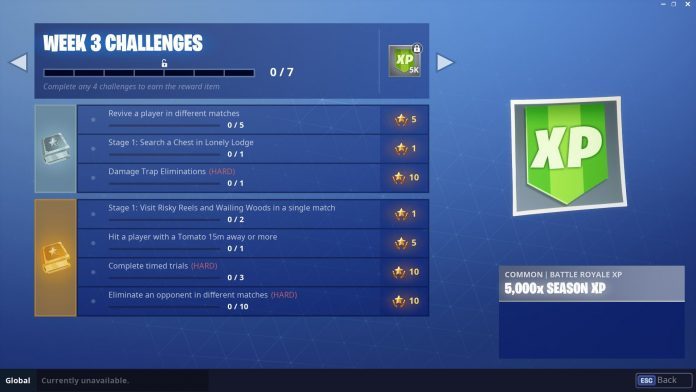 Once you complete all seven, you’ll unlock the Week 3 Hunting Party challenge which grants you a free Battle Pass tier when you collect the hidden Battle Star!

As far as the two ‘stage’ challenges are concerned, we will need to wait until they officially go live to find out what is required after the first of those stages.

The expected challenges are as follows:

You can use the cheat sheet map provided by Fortnite content creator ‘thesquatingdog’ to help you find all of the locations where this week’s challenges can be completed,

Revive a player in different matches

For this challenge you’ll need some teammates! Play squad games, or even 50 vs 50 for more opportunities, and simply revive a player when they get dropped.

Note that the challenge requires you to revive one player in five different matches, so only your first revive will count in each game.

Everyone loves the stage challenges, but we can’t tell you a great deal about this one until it goes live so that we can see what the other stages involve.

You may simply be asked to visit various areas to open more chests or the developers could decide to throw a curveball and give you a different type of task for each step.

This one is pretty simple, but completing it might take some time. If you’re clever with the way that you place traps, finding one kill should be easy.

Putting one on the ceiling above a door in a busy area of the map is usually a good bet.

The first of the Battle Pass exclusive challenges! As this is another stage challenge, you’ll need to wait until they go live before finding out what the later steps entail.

Hit a player with a tomato from 15m away or more

Another interesting new challenge! If you simply need to hit a “player” your best bet will be to work with teammates and allow yourselves to be hit.

However, if the challenge only applies to hitting opponents, this could prove to be one of the more difficult tasks this week.

The Tomato is a toy item that cannot be unlocked until you reach Tier 28 of the Battle Pass. Once you get there, equip it and you’ll be able to throw it during games.

Timed trials were one of the more difficult challenge in Season 5 but Epic Games want you to complete some yet again!

All of the locations for the time trials have been found and can be found below:

Eliminate an opponent in different matches

There’s no trickery to this one, you simply need to pick up one kill in a total of 10 different matches; something that you should be able to achieve as you play through the week.

Even better, this is classed as a hard challenge, so you’ll get even more xp for completing it!