EA SPORTS has added a brand new La Liga Upgrade Squad Building Challenge to FIFA 20 Ultimate Team, with two gold players rated 82 or above included in the rewards. Now, our guide is going to show you how it’s done.

With the league’s Team of the Season So Far cards having been revealed and added to packs in-game, now is the best moment to capitalize on this limited-time challenge. With Lionel Messi, Luis Suarez, and other big names included, you can complete this SBC as many times as you want in the hopes of packing at least one.

Just like any other SBC, this one requires you to build a specific team and trade it in for rewards. There are certain players that fit the bill more than others, however, so let’s run through the requirements, cost, and solutions so you know what you’re doing.

Here’s the full list of La Liga TOTSSF players that have been added to Ultimate Team. Maybe you’ll pack one after finishing this SBC.

The La Liga Upgrade SBC is available for a limited time in FIFA 20, with the window of opportunity slamming shut on May 15. Those looking to check this one off can view the requirements below, too.

These two guaranteed 82+ rated players don’t come cheap, though, and that’s possibly because the La Liga TOTSSF cards are still available in packs. According to FUTBIN, this SBC will set you back between 23,000 to 26,000 coins – depending on what platform you play on.

That price might move around a bit as the market fluctuates, and the recommended solution we have picked out can be seen below. 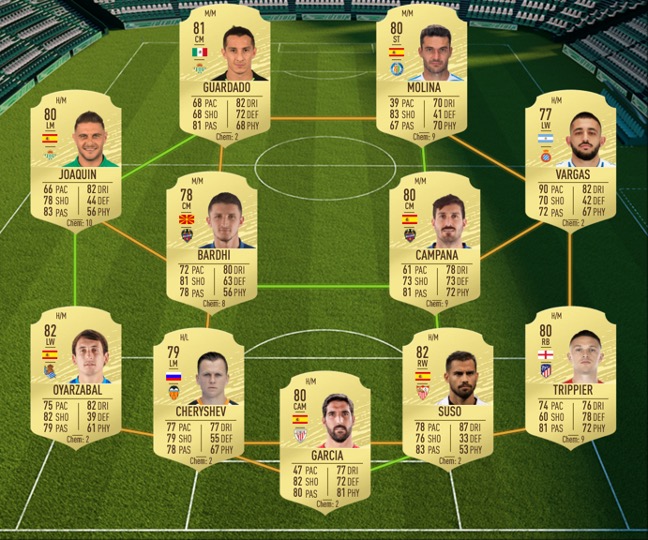 The prices of players that fit into this SBC have been rising since the challenge was released, so it’s worth noting that those who think it’s maybe too expensive could cash in on some of the cards that are gathering dust in their club.

Until next time, follow us on Twitter @UltimateTeamUK for more guides, tips, and general FIFA news. Hopefully, this helped you out!