The players will be banned from all official esports competitions and competitive events beginning on December 31, 2018 and ending on the same day in 2021, a suspension that amounts to exactly three years.

This suspension follows an investigation that PUBG Esports conducted after all four players had received permanent in-game bans on December 19 for using unauthorized software.

The investigation concluded and confirmed that the players had indeed illegally used third party software during their National Pro League Qualifiers in early December, which resulted in the qualifying for the NPL’s Preseason.

As a result, in addition to the punishments handed to the players, their respective NPL teams – Reapers, Almost, Death Row, and Totality – have been disqualified from the NPL Preseason and will be replaced by the next four teams on the overall standings of the NPL Online Qualifiers Round 3.

It is not yet clear whether any or all of these teams knew that their players were using unauthorized software, but they have all paid the ultimate price as a result of it.

Disqualification from the Preseason has cost all of these teams and players the chance to compete in Stage 1 of the 2019 NPL Season, at worst the Contenders division, which all teams that qualify for the Preseason are guaranteed a spot in.

As for the four teams that will replace the disqualified sides, PUBG Esports will be revealing them sometime prior to January 7, which is when the NPL Preseason begins. 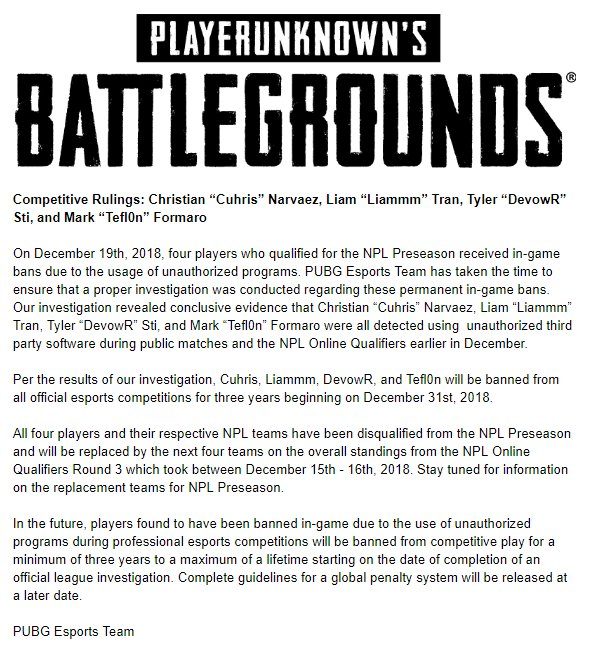