Popular YouTuber MxR has claimed that a licensing company has been “extorting” his channel over the use of memes after getting hit with a major bill.

MxR, who has close to three million subscribers across their three YouTube channels, creates a variety of content that includes reaction videos, gameplay, and even game mod reviews. With their reaction videos, the YouTuber typically picks out memes from social media – with some being other YouTube uploads and viral clips.

Due to this, he has revealed on Twitter that Jukin Media, an entertainment licensing company, has struck him with another bill for around $3,000 and that he thinks he’ll have to pay otherwise his channel could be in danger of being struck down.

Here are the charges Jukin media gave me. $3000 for a single meme bc it contained footage from two of their clips. If I don't pay this, they'll strike and take down my channel. pic.twitter.com/61h8FrJJxf

Prior to his tweets, the YouTuber and his co-host Jeanie, uploaded a video explaining their current situation, claiming that the company in question has been trying to “extort” them purely because they’ve paid their bill before.

The content creators explained that the copyright system has been changed from license owners claiming a video and then receiving revenue to them issuing strikes and their own bills. As they’ve run into issues with Jukin previously, the pair noted that they’d removed clips from their videos and paid around $2,000 to the company – which they believe shows that they’re willing to pay and, therefore, they’ve been hit with larger sums.

“I feel like if they treated every YouTuber like this, tonnes of channels would be deleted right now,” he explained. “If you go on any YouTube channel, chances are like some f**king video on the internet played at some point, but they’re not going after them and taking them down. They’re going after us because I think we gave them money.”

Jukin jumped into the comments section to make themselves heard, and also posted a screenshot of their comment on Twitter – explaining that their licensing is no different to people like Shutterstock and issues can be avoided by paying a membership fee.

“You’re making money off of videos that don’t belong to you — our only goal here is to ensure that the rightful owners of the videos are compensated,” they tweeted. “We’re happy to talk and try to find a resolution that works for everyone.” 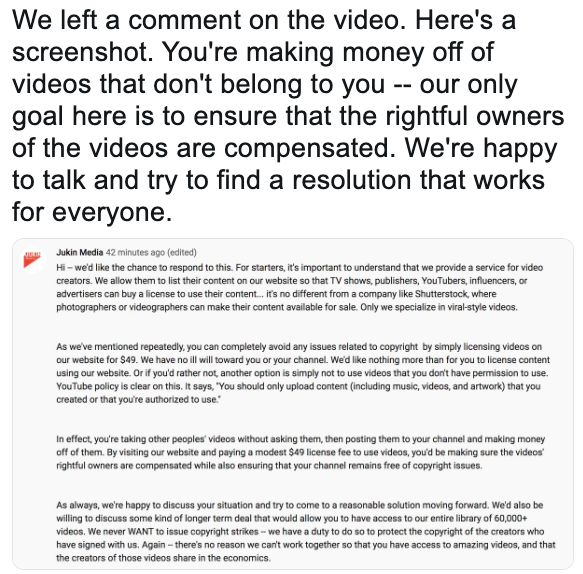 Whether or not the two sides will be able to come to a resolution on the matter remains to be seen but it appears that there are certainly avenues for them to go down.

If not, the YouTubers revealed that they may have to make a change to their content, scrapping the use of some videos in their reactions in order to keep their channel going.