Popular Twitch streamer Felix ‘xQc’ Lengyel pulled off a stunning comeback against an opponent in UFC after he found himself holding on for dear life.

While he may be one of the most talented Overwatch players around, xQc regularly finds himself playing a wide variety of games during his daily Twitch streams. Be it something big like Counter-Strike: Global Offensive, or a smaller indie game recommended by fans, the streamer usually dabbles in it – and might even rage every once in a while.

That was a similar story during his November 24 broadcast, when the Candian jumped back into UFC and tried to turn around his online record by defeating anyone who dared to stand across from him in the octagon. 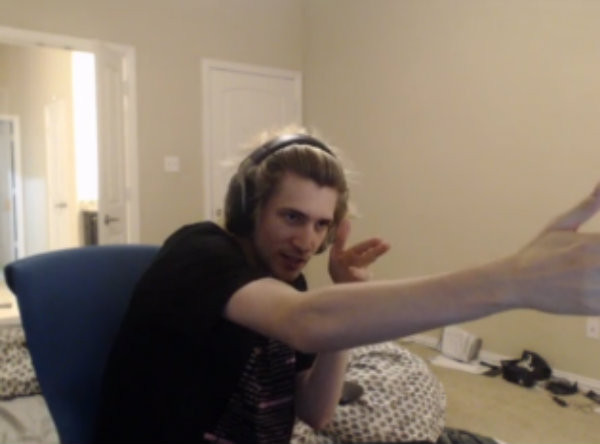 Thousands of viewers tune in to watch xQc on a daily basis.

Instead of playing with a created character like fellow streamer, Saqib ‘LIRIK’ Zahid, xQc opted for UFC middleweight, Robert Whittaker, but found himself in danger during the second round of a bout.

With 90 seconds to go, the streamer was on the receiving end of some brutal knee strikes and kicks to the body when his chosen fighter dropped to the canvas. While his opponent could (and should) have finished him off, they opted to taunt xQc instead – giving him the chance to recover.

It proved to be fatal for them, however, as xQc took a moment, jumped back to his feet and delivered a devastating overhand left that instantly dropped his opponent.

“Yes, yes, it’s over,” he yelled in celebration, before throwing his arms out to the side and deciding to have his own taunting moment. “Done! Keep dozing. Boom, boom, boom, boom, champion of the world!”

Despite the win, xQc still has quite a ways to go until he can, officially, call himself the champion of the world – as he’s not got the greatest record in UFC online fights.

He could, very well, turn it around by going on an insane win streak, but it’ll take more than miracle wins against opponents who are looking for a flash knockout – rather than a ground and pound stoppage – to get himself a positive record.

Either way, it’s a positive step for xQc as he looks more like a contender than a struggling journeyman fighter.