Imane “Pokimane” Anys is more than a top streamer in her own right: she’s also part of the streaming group “OfflineTV,” which is suffering from a content thief posing as the organization on YouTube.

However, it seems that a potential fan of the group has decided to use OfflineTV’s content for their own purposes, creating a YouTube channel that uses clips from the group’s broadcasts as highlights.

A channel is posing as popular streaming group “OfflineTV” – and Pokimane wants them to stop.

That’s not all: the channel even appears to be posing as the org, with their “About” section reading, “We’re Offline TV! We are a group of content creators who got our start in gaming. Now we live in a house together and make cool videos.”

Pokimane addressed this fake channel during a broadcast on November 29, where she explained that she’d left numerous comments on their videos urging the poster to stop using her content, since she’s made another account for such highlights.

“If you’re watching this, I want you to know – please stop,” she pleaded. “Like I am personally asking you, just don’t use my stuff, okay? And if other people – I don’t think they want you to use their stuff, either… but they can make that decision for themselves.”

However, it doesn’t look like her pleas got her very far, causing her to reach out to her own fanbase for help.

Since it seems that her own efforts aren’t enough, Anys asked her fans to leave similar comments on the channel’s uploads, in hopes that the impersonator will see her plea and discontinue uploading her content.

“…if you guys do see this channel posting our stuff, feel free to comment,” she continued. “Maybe he didn’t see me comment, and be like, ‘Poki doesn’t want you using her stuff, please and thank you.’” 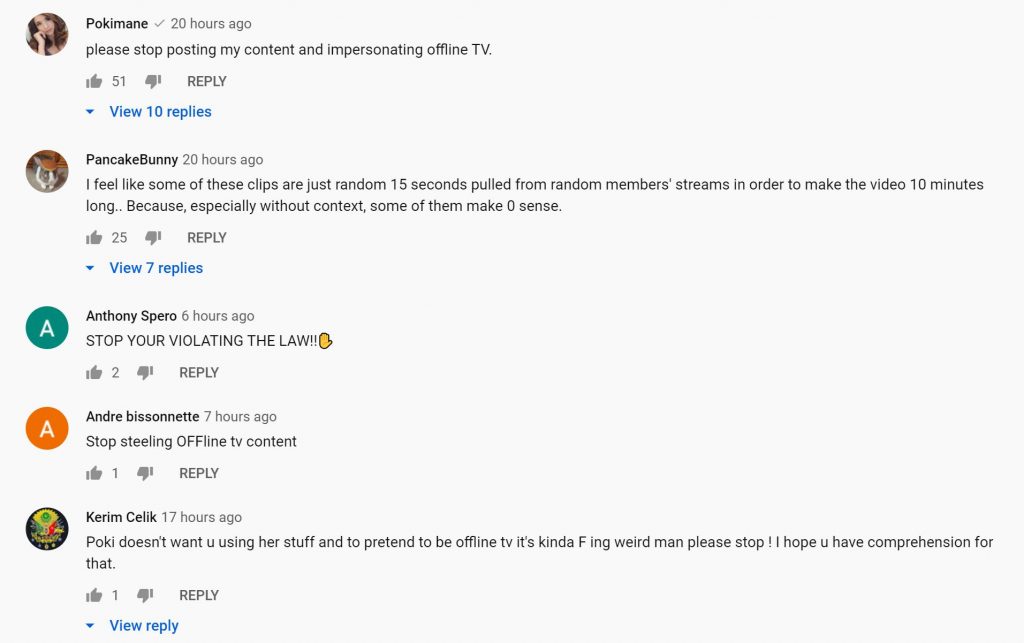 Both Pokimane and her fans are pleading with the impersonator to discontinue using her content.

While the channel is still active as of writing this article, fans have since flooded the account’s comments section asking them to stop their thievery – although they have yet to respond to the community’s cries.