Overwatch streamer under fire after pet cat gets electric shock

An Overwatch streamer is coming under fire after she watched her pet cat chew through wires which resulted in it receiving an electric shock.

Animals, especially cats, can be pesky creatures, with many streamers having their broadcasts sabotaged by the hairy felines.

But one Overwatch streamer is receiving heat from internet forum Reddit after her kitty chewed through a wire and shocked itself live on stream, with many upset that she didn’t check on her pet afterwards.

‘Sadlittlesun’ was playing the hero-based shooter on October 17 when her furry friend suddenly appeared behind her and started to chew on a wire leading to some Christmas lights hung up on the wall.

“Stop!” she scolded the animal calmly, before hitting the wire to try and deter it from the behavior. “He’s chewing on my f*cking cord! On my f*cking Christmas lights!”

The streamer looked on as the cat continued to attack the wire. “You’re going to f*cking electrocute yourself!” she exclaimed, before the lights suddenly turned off and the animal flew off in a flurry across the room as it got shocked by the electricity current.

“Oh God!” sadlittlesun stated as she burst into hysterical laughter, finding the situation absolutely hilarious. “Oh God, dude!” her friend who she was chatting to during her broadcast exclaimed. “You didn’t stop her (the cat)!”

The moment was clipped and found its way onto “front page of the internet” Reddit, where viewers were stunned by what they’d witnessed, focusing mainly on questions surrounding the reasoning why the streamer hadn’t stopped her cat, or checked it was okay once it had been shocked instead of laughing about it.

“Who just sits there and watches their cat chew on live wires?” one user asked. “I wasn’t ready to hate her for not stopping the cat. I am when I saw her laughing.” another replied. 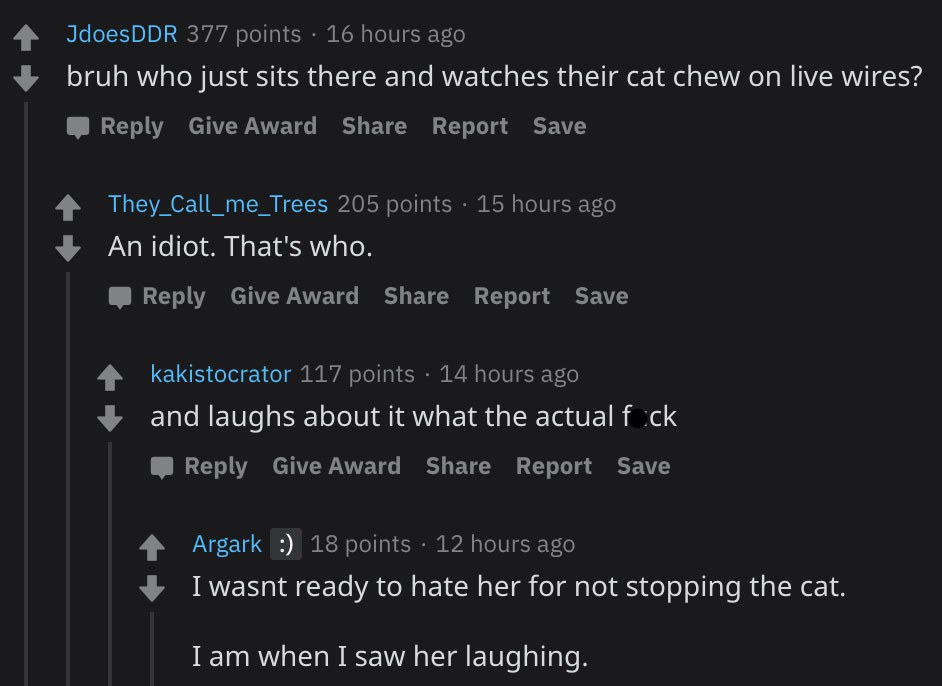 People were not happy after the clip was posted onto Reddit.
600[ad name=”article5″]

On another thread about the same incident, people were equally as upset by the clip, with one person even going so far as to report her for the situation.

“The problem is that she encouraged her cat to harm itself and laughed about it instead of being a responsible owner.” a user replied. “What if the cat does something stupid again, she doesn’t respond to it, and the cat dies or is seriously injured?”

Reddit users claimed to have “reported” the streamer over the clip.

The 21-year-old is mainly known for streaming Overwatch, and keeps her broadcasts in a tight-knit circle of almost 200 followers on Twitch.

While she is a self-proclaimed “addict” of the first-person shooter, it’s probably a wise guess that she’ll be taking more time away from the game to watch what her pet is doing in the future to avoid any further accidents.