YouTube stars KSI and Logan Paul are set to throw down in the internet’s most anticipated boxing rematch on November 9 – but the fight’s undercard remains under wraps, which should be clarified for the event’s press conference on September 14.

KSI vs Logan Paul 2 will take place at the Los Angeles Staples Center on November 9, boasting an “all pros” undercard, according to Matchroom Boxing promoter Eddie Hearn.

However, the pro fighters in question have yet to be named, aside from British professional boxer Billy Joe Saunders – the opponent of whom should be revealed at the fight’s press conference. 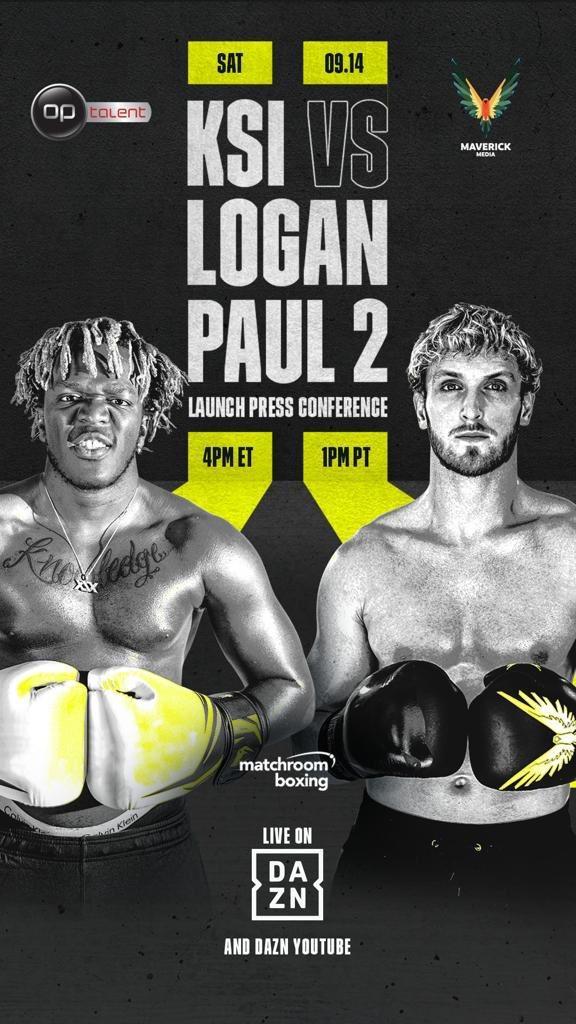 How to watch the KSI vs Logan Paul 2 press conference

According to an official poster Tweeted by KSI on September 13, the press conference will likewise take place at the LA Staples Center on September 14 – a little less than two months before the rematch date on November 9.

Fans can catch the conference in-person at the Staples Center, or watch the event live on sports streaming platform DAZN’s YouTube channel, with the stream beginning at 1 PM PST (4 PM EST/ 9 PM BST).

What can fans expect from the press conference?

While KSI and Logan Paul’s initial bout in August 2018 saw a drama-filled conference – complete with below-the-belt insults and actual riots in the streets – KSI hinted that this next conference could be more professional, as told in his announcement video on September 3.

“I think it’s gonna be more a battle of words,” KSI admitted. “I’m not gonna go with the whole, try and make fun of him, because I’ve already done that.”

Fans can also look forward to more fighters being introduced on the undercard – an undercard that Eddie Hearn claims will be “pros only.”

Will other YouTubers fight on the rematch undercard?

Despite Hearn’s claims, YouTuber Jake Paul pleaded with the promoter to let him fight on the undercard, claiming that he was being excluded from the “KSI vs Logan Paul narrative” despite having been part of the feud from the very beginning.

Paul even secured a pro boxing license for the bout – a fact that Hearn appeared to appreciate, responding to his video with a simple Tweet that read, “Good video – let’s talk!”

Considering the drama from last year’s press conference, fans and critics alike can only imagine what will happen this year – although, with the rematch “going professional,” things could take a very different turn in comparison.