YouTube star and makeup mogul Jaclyn Hill opened up to fans in an emotional video in early February, explaining the physical toll her failed lipstick launch had taken on her body — but some fellow creators weren’t sympathetic.

Jaclyn Hill’s 2019 makeup launch was met with backlash from unsatisfied customers across the net, who uploaded multiple photos of lipsticks covered in fuzz, bumps, and even completely crushed in half.

The YouTuber explained the fallout from being “canceled” over her lipsticks in early 2020, admitting that she’d turned to alcohol as a way to “self-medicate” her debilitating anxiety over the outrage.

With her alcohol consumption came significant weight gain, which the YouTuber claimed had swollen her face — but despite fans’ overwhelming support, another beauty tuber took the opportunity to make a seemingly snide remark.

A screenshotted Instagram comment from fellow beauty guru “Eden the Doll” is riling up some fans of Jaclyn Hill.

This comment didn’t go unnoticed by Hill, who responded in a Tweet on February 4 where she appeared to label Eden’s comments as “verbal abuse” and gave a call to action for her subscribers.

“These types of comments make ANYONE feel like they can’t post a picture if they are not ‘perfect,’” she wrote. “I’m so over it and won’t tolerate it anymore. There is a difference between freedom of speech and verbal abuse. Me and my subscribers will make a change in 2020!”

These types of comments make ANYONE feel like they can’t post a picture if they are not “perfect” im so over it & wont tolerate it anymore. There is a difference between freedom of speech and verbal abuse. Me and my subscribers will make a change in 2020! ✊? https://t.co/okcSweC8og

Eden the Doll followed up her comment with a post via Instagram stories, where she clarified that she harbored no ill will toward Hill and claimed she was merely repeating her caption because she could “relate” to her weight gain.

“I would NEVER have commented if I thought people (or Jaclyn) would have taken it seriously,” she explained. “I apologize to her and anyone who took it the wrong way.” 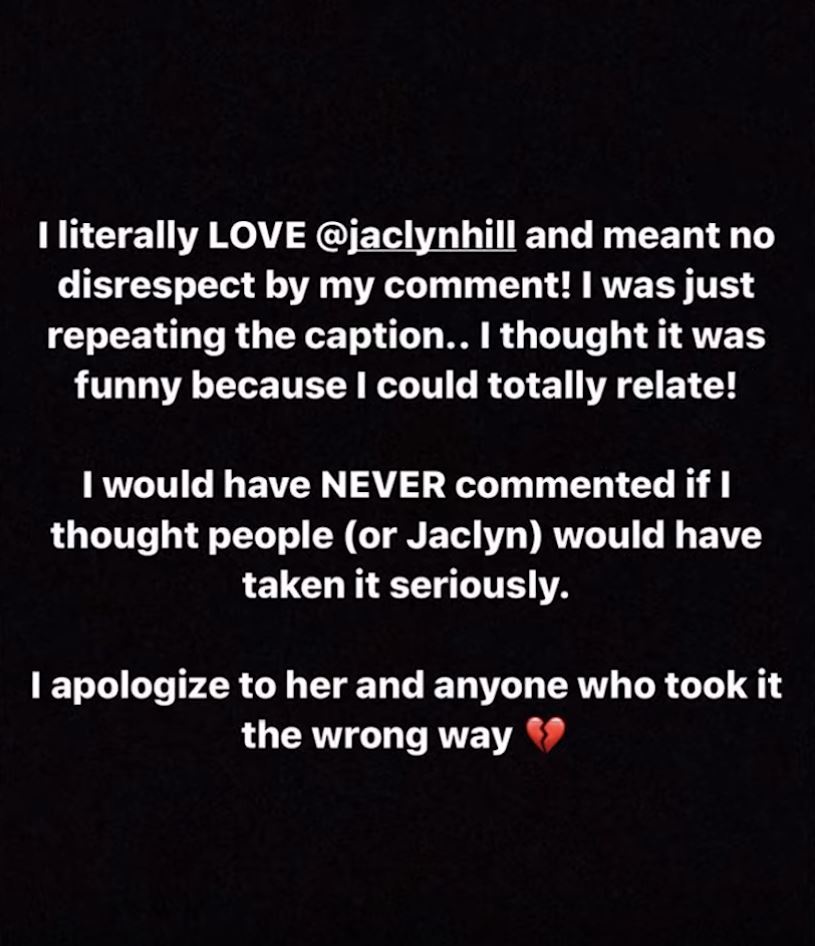 Hill has yet to respond to Eden’s statement at the time of writing, but it’s safe to say that fans are sticking with Jaclyn in wake of a video that shines light on the dark side of internet fame.