A date has been set for a boxing match between two of the world’s strongest men – Hafthor ‘The Mountain’ Bjornsson and Eddie ‘The Beast’ Hall.

On May 2, The Mountain broke Hall’s deadlift world record by pulling 501 kg (1104 lbs) off the ground live for viewers around the world on Twitch.

Almost immediately after his record was broken, The Game of Thrones star and now world record holder, challenged Hall to a boxing match literally of epic proportions, and it seems the match will be actually be happening in September 2021 after The Beast responded on Instagram.

I’ve signed the papers and it’s “OFFICIALLY” on. Thanks to @coresportsworld for the opportunity! #BackUpYourBull Big Love The Beast

“That’s done, it’s locked in, there’s no backing out,” Hall said after he signed the contract. “So, Thor, are you happy, has your dream come true? You finally get to go up against the guy who bested you at World’s Strongest Man 2017, the man you called a cheat.”

The Beast seems to be really looking forward to the fight too, which is understandable considering he’ll be going up against the man who took his deadlift world record away from him (though Hall has some doubts about how legit Thor’s attempt really was).

“I’m happy, I get to make a load of money and step in the ring with you and do business,” The Beast laughed. “I hope you’re happy being the “home gym hero” right now, everyone knows full well you haven’t got the balls to step into a competition and replicate what I did.”

Hall set his 500 kg deadlift world record at a competition back in 2016, while Thor tackled the record at home.

Hall went on to assure Thor that he would be training for this fight harder than he’d ever trained before, to teach the man who took his world record a lesson.

“World’s Strongest Man 2017, I trained for that like no other man did and I came and dominated that competition, and just like I did for that, I’m going to do the same for the fight,” The Beast growled. “I’m going to swim out to those dark waters, and I want you to come with me. I’m gonna keep swimming, I don’t give a f**k anymore, I’m not turning back, and you will, because you’re a p**sy.”

“You can’t bring your entourage with you, it’s a dark, deep, cold, horrible place, and it all ends in the ring,” the English strongman finished. “And that’s where I’m going to teach you a f**king lesson.” 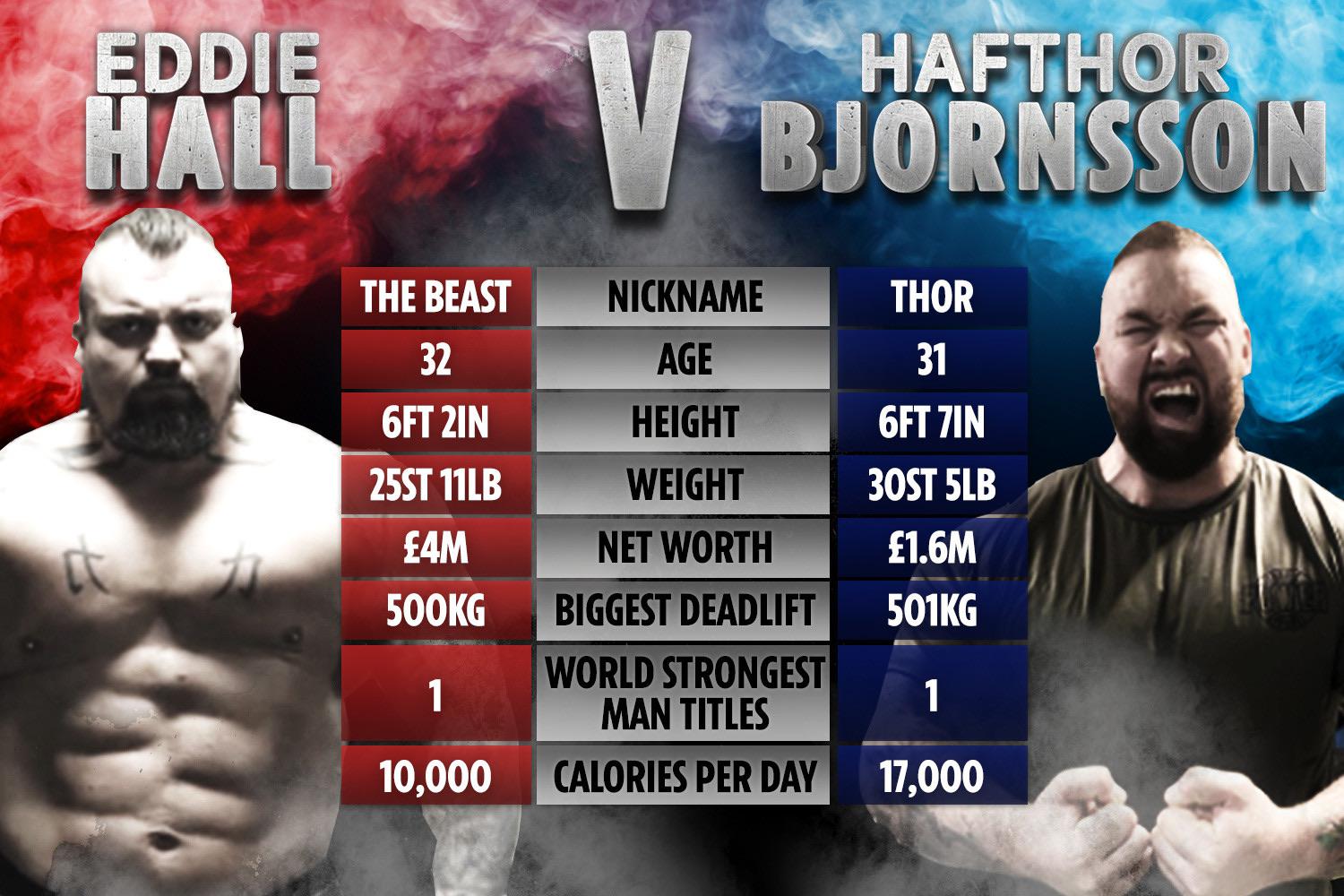 Here’s a look at how the two rival strongmen stack up.

While Thor and Hall are undoubtedly two of the largest and strongest human beings on the face of the earth, hopping in the ring to go blow-by-blow is a whole different animal than lifting massive amounts of weight, and requires a different kind of endurance.

No matter what happens, we’ll be following both monsters as they get ready for this titanic clash that will hopefully bring this friendly feud to a head once and for all.