Popular Just Chatting streamer Nicole ‘BadBunny’ has been taken off Twitch again, this time over a DMCA takedown during the Democratic Debate in America.

BadBunny has had her fair share of controversy in 2019, being struck with a suspension in April for breaking community guidelines on sexual content, as well as defending herself after homophobic and racist comments emerged from her Discord account.

She is now back under the spotlight, after her channel was taken down over a DMCA complaint during the Democratic Debate on November 20.

BadBunny’s Twitch account was taken offline mid-stream on November 20 due to a DMCA takedown over the Democratic Debate. Many streamers have been talking about the debate on the Just Chatting section tonight, with many taking precautions so as to not get taken down.

BadBunny posted on Twitter shortly after her channel was banned, calling out Twitch for a lack of oversight in their reporting and suspension systems.

“You just banned @Mike_from_PA and me because a troll abused your DMCA reporting system,” she said. “There’s no claimant listed. This is a random Gmail account. Is this really your system?”

You just banned @Mike_from_PA and me (both Twitch Partners) because a troll abused your DMCA reporting system.

Is this really your system??? pic.twitter.com/gBcW7M6VJk

BadBunny has suggested Steven ‘Destiny’ Bonnell’s community could be responsible for the ban, due to mass reporting her channel and filing fake DMCA claims.

In a message on her Discord, both BadBunny and ‘MikeFromPA’ have said that it was “100% DGG,” which is shorthand for destiny.gg, the name of Destiny’s forum.

“NBC had nothing to do with the claim,” said MikeFromPA, “It was a false claim made to look like it was NBC.” 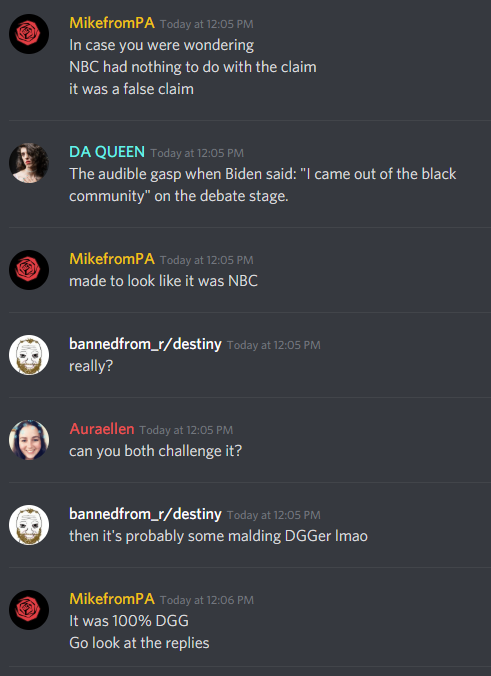 BadBunny and MikeFromPA have blamed the bans on Destiny, another prominent political streamer.

Destiny has responded to the allegations though, saying that BadBunny and MikeFromPA need to take responsibility for their poor behavior on the platform before they start accusing other users of doxxing them.

“Now when I stream anything related to debates, I’m going to have these dipsh*t’s audiences all over my a** trying to false DMCA me because I’m calling on my community to do it,” the Twitch streamer said.

“How f**king amazing that these guys have no responsibility for any of their sh*t, what a joke,” he added.

DMCA takedowns can usually result in Twitch channel bans varying in length from 24 hours to two weeks. It’s not clear how long BadBunny will be off the platform for, but we will update you with more information as it comes available.