Yet another Twitch artist has been banned by the platform for a sexually suggestive work.

On September 18, Saejin revealed that Twitch had suspended him for the second time meaning a third infraction would result in a permanent ban.

The artist tweeted a photo of the allegedly inappropriate piece of non-nude cartoon females dressed in bathing suits. While the art does seem somewhat sexual, the content is similar in tone to games such as Dead or Alive Xtreme Beach Volleyball – a game that users are allowed to stream on the site.

just got banned on twitch for 3 days for this recent piece. the twitch staff was kind enough to let me know in dm hours prior to the ban so i could back up the vids and prepare. TOS seems to be getting restrictive so the future of art on twitch seems wack. pic.twitter.com/dks0x0TocB

According to Saejin, Twitch staff let him know ahead of time that he would be suspended, so he was able to back up copies of the vods.

The South Korean streamer added that the platform’s terms of service is getting to be too restrictive and the future of art on Twitch seems “wack”.

btw this is my second ban meaning if i ever get another one, it's a perma – so if that ever becomes the case i'll see you guys on mixer -> https://t.co/lJkSIA4KWP

In a follow-up tweet, Saejin said that in the event he received a permanent ban he would move to rival streaming site Mixer. The Microsoft-owned site gained notoriety back in August when Fortnite legend Tyler ‘Ninja’ Blevins revealed he would be ditching Twitch to stream exclusively on Mixer.

In a final post, the artist uploaded what he was working on during his last stream, but was unsure if it was worth finishing because of the risk of a potential ban. The work in progress shows a woman dressed in steampunk attire with exaggerated breasts – typical for the medium.

what we were working on today during the stream. might as well put this up since i'll be gone for 3 days. enjoy. we'll decide if we'll continue with it when im outta ban. (could be risky) pic.twitter.com/yNc1yUmAV6

Saejin isn’t the first artist to be banned by Twitch for ‘sexually suggestive content’ and he likely won’t be the last. French pin-up artist Sareui was suspended for drawing characters from the game Fate/Grand Order.

According to Sareui, she drew the characters “exactly the same as they are in the game”. 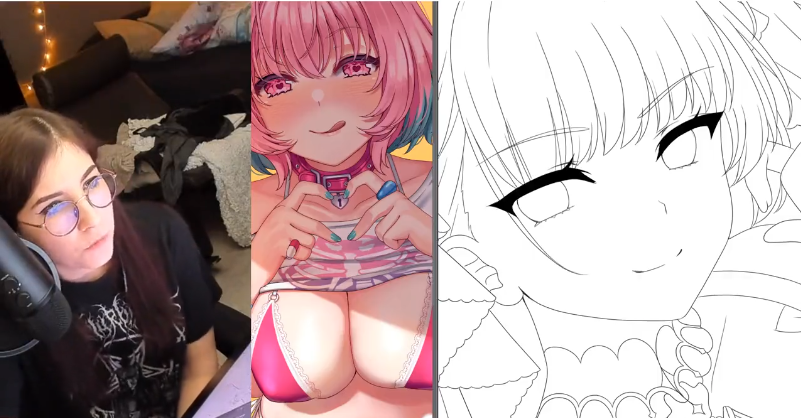 Saruei was not happy after Twitch decided to ban her.
[ad name=”article5″]

Twitch’s public rules state that the site will: “restrict content that involves nudity or is sexual in nature.” They go on to add that while they understand, “some nudity or sexual content might be intended for educational, scientific, artistic, newsworthy, or academic purposes, we restrict this content due to the diversity in age and cultural backgrounds of our global community.”

With all of Twitch’s recent bans as of late, it may be time for the platform to update its rules or be more vocal in why some things are acceptable and others are not.