ESL Clarify That a Hacker was Responsible for Insensitive Tweet About Madden Event Shooting - Dexerto
CS:GO

Electronic Sports League (ESL), has clarified that an insensitive tweet from one if their official accounts about the Jacksonville shooting at a Madden 19 tournament, was posted by a hacker.

ESL, one of the largest and most recognized esports tournament organizers, posted a Tweet from their main account sending condolences to those affected, but a response from the official ESL Counter-Strike account was much less compassionate.

The reply was quickly deleted, and ESL have since confirmed that based on the information they have, the account was hijacked by hacker, who posted the offensive tweet.

The tweet linked to a video, which played an audio file of the ‘monster kill’ sound effect, a quote popularized in first person shooter game Unreal Tournament.

ESL initially called it simply an “unauthorized use of the account.” 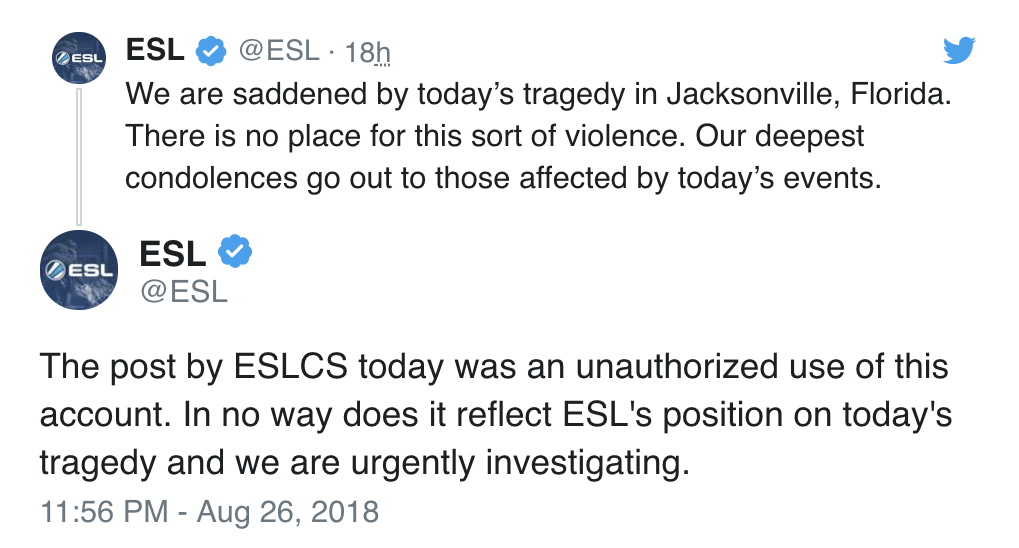 After investigation, ESL staff confirmed that it was a hack. VP of marketing at ESL, Kai Kienzle said that the Counter-Strike account was being locked down until they could discover the source. 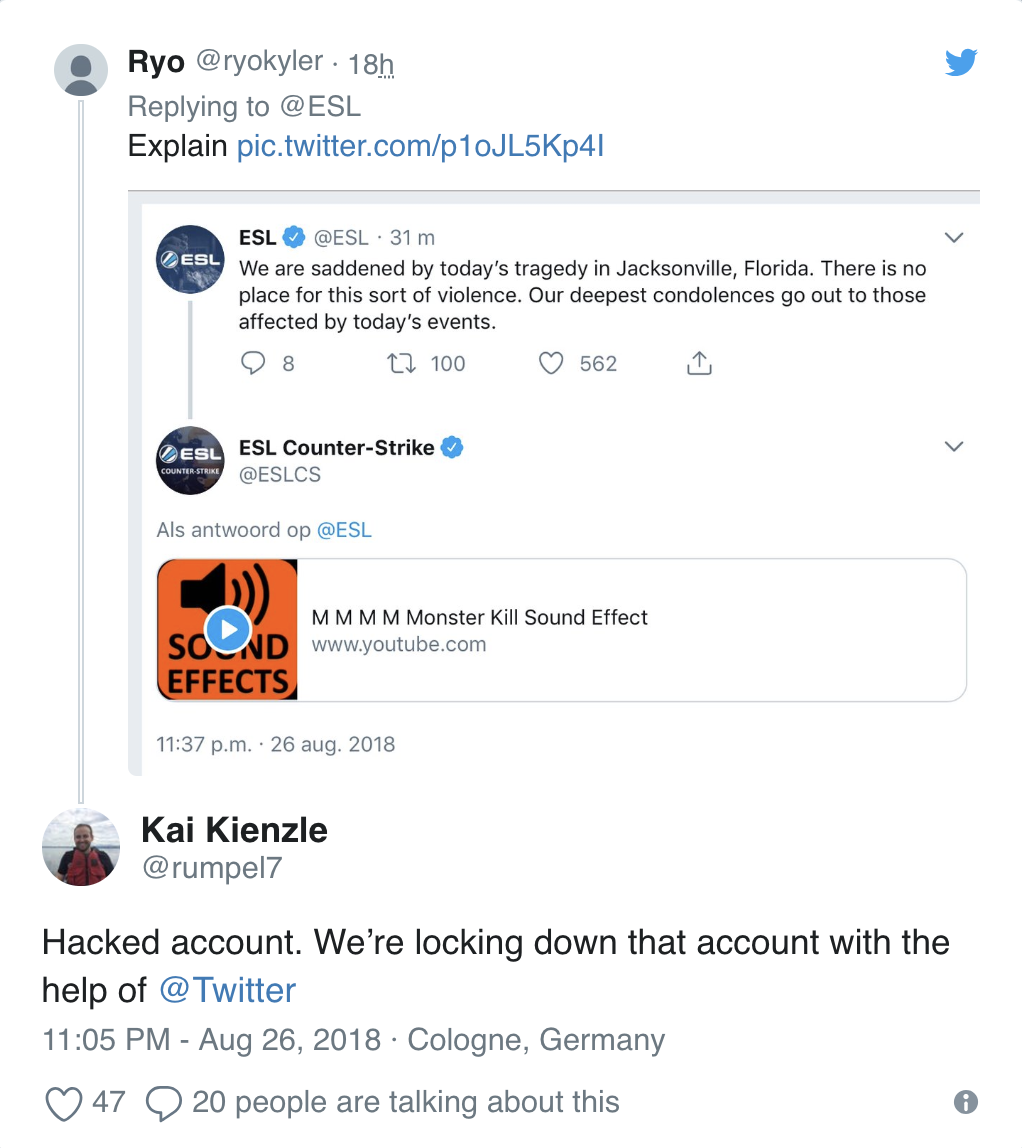 Lead Event Marketing and Observer at ESL, Patricia von Halle, later posted more updates on the cause of the tweet, revealing that they could not be confirm fully that it was a ‘hijack’, but it was certainly not an authorized action. 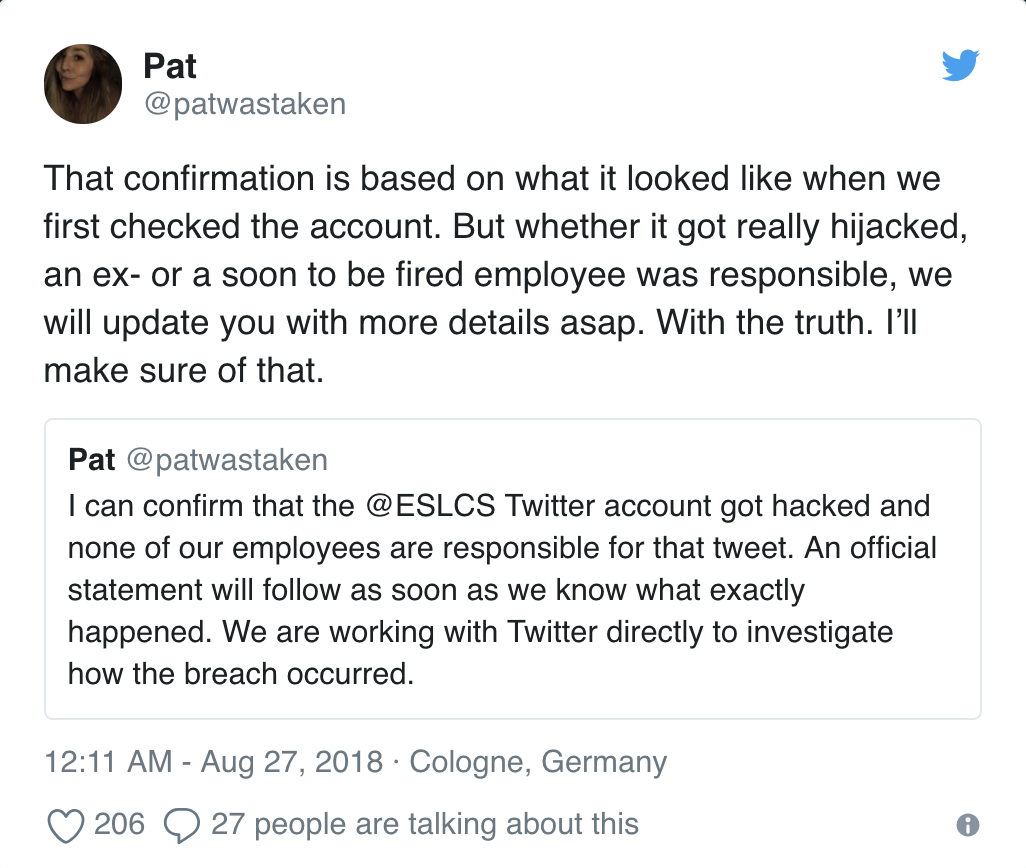 It was then later confirmed that the login to the account was from an unrecognized device, and not in a location where any of the ‘internal social managers live’. 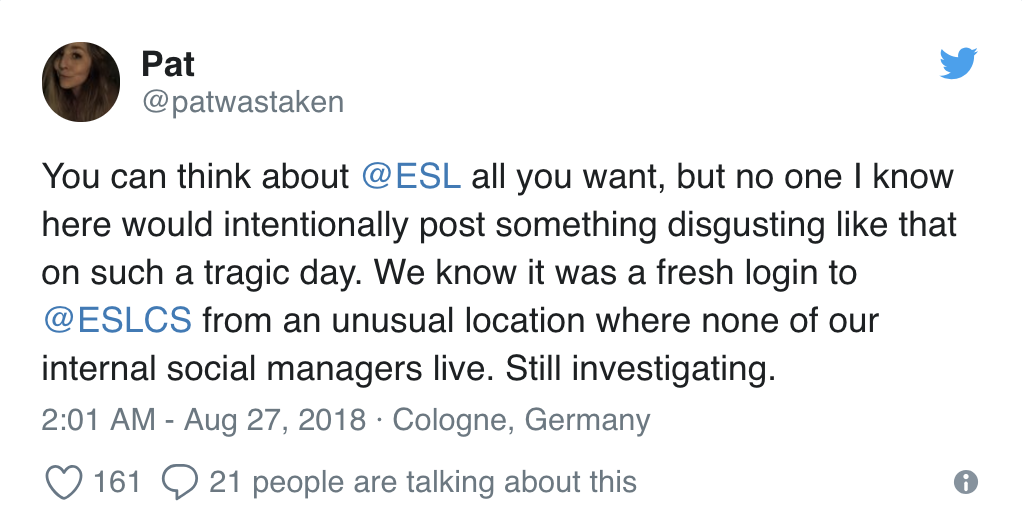 As aforementioned, ESL is one of the largest tournament organizers in the esports ecosystem, often hosting events with tens of thousands of spectators in attendance – a much larger scale than the small LAN hosting the Madden tournament.

Following the attack, there was calls from the esports community for increased and stricter security at events, to avoid such tragedies in the future.

Unfortunately, because the Madden tournament took place within a larger shopping and entertainment complex, the small restaurant/bar itself could not be wholly responsible for security.

Scump explains why he “hates” the CDL format