An audio issue that stops players from hearing the footsteps of some opponents is causing problems at FACEIT’s London CSGO Major.

The bug seems to be affecting the ability to hear the footsteps of enemies as they move around the map and is associated with the special build of Counter-Strike: Global Offensive that Valve has sent to FACEIT to use at the Major.

Unsurprisingly, the players competing in the tournament are upset at the issue, most notably North’s Mathias ‘MSL’ Lauridsen, who took to Twitter to complain after his squad was eliminated by Vega Squadron. MSL claimed that the event was “the worst major” he had ever attended, and labeled the conditions they were forced to play in “horrible”. 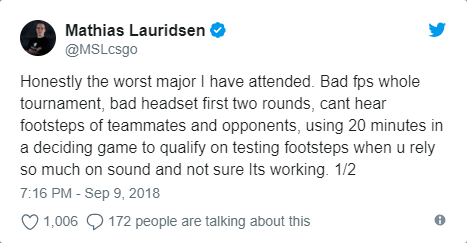 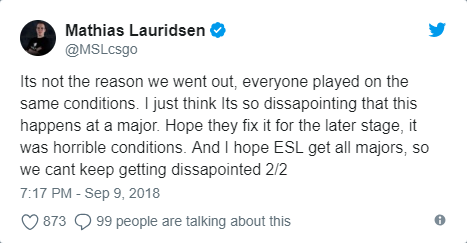 Shahzeb ‘ShahZam’ Khan was another player who fell foul of the bug, as he suffered the issue towards the end of compLexity’s match against Vega Squadron.

Renegades Head Coach Steve ‘Ryu’ Rattacasa provided a more in-depth analysis of the issue, confirming that audio would cut in and out for a couple of players on the map, meaning that one or two footsteps would be heard, and then there would be total silence.

Ryu stated that even sprinting and jumping would also result in no audio being played, and that both friendly and opposition players were unable to hear the footsteps.

Being able to hear opponents is a crucial part of CSGO. Players use footsteps to relay information to teammates about the positioning of enemies, so the ability to move around silently denies opponents important information, while allowing for pushes and movements that players would otherwise be unable to make.

The audio issues are just the latest problem to hit the London Major. The first week of the event has been dogged by technical difficulties, causing numerous delays throughout the New Challengers Stage.

FACEIT have acknowledged the issue with the Major build of CSGO on Twitter, and have confirmed that they are working with Valve to fix the problem. However, there is no official announcement as to when that fix will be released.