Leaker claims Modern Warfare will have three types of streaks, including Specialist Streaks

It appears that Specialist Streaks could be making a surprise return in Call of Duty: Modern Warfare, according to new information released by an infamous leaker.

With the highly-anticipated Modern Warfare title just months away from release, the buzzing Call of Duty community continues to starve for more details about the game’s Multiplayer side of things.

However, the global reveal of Multiplayer isn’t happening until August 1, which means that players have had to resort to getting their news from those who claim to have insider information about the game.

One such person is YouTuber ‘TheGamingRevolution,’ who’s established himself as a prominent source for supposedly leaked MW content.

Specialist streaks are back.

Specialist Streaks were a mechanic first introduced in Modern Warfare 3 and later in Ghosts, adding another dimension to unlocking streaks in Multiplayer.

Unlike traditional streaks, Specialist Streaks rewarded players with additional Perks whenever they accumulated a certain number of points in a row without dying.

Players who achieved the maximum point streaks would unlock all of the Perks during the match, giving them a significant boost in ability and power over their opponents.

However, Specialist Streaks haven’t been seen in Call of Duty since Ghosts, with unlockable streaks reverting back to just equipment and support.

As a result, players could only use a limited amount of Perks per match, as the special abilities would only come into affect when they were equipped on an active class. 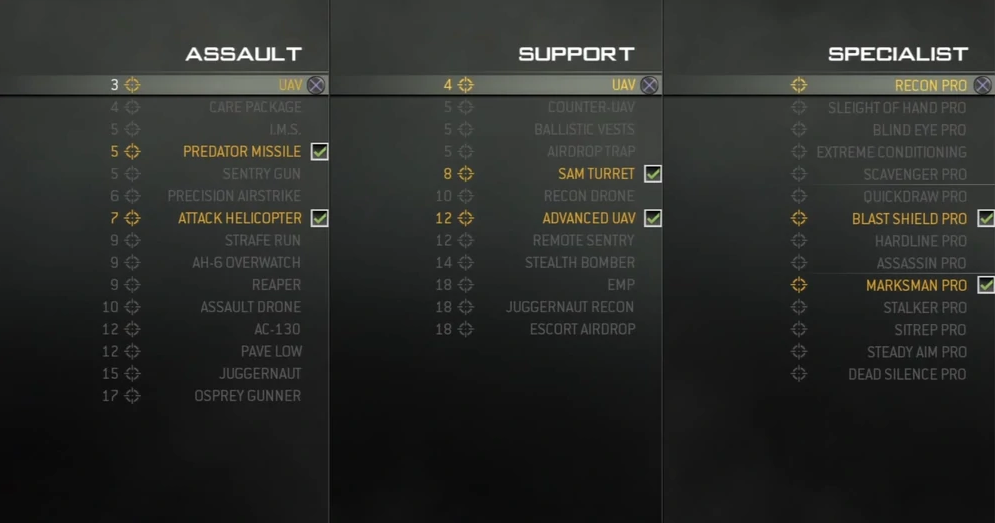 That being said, Specialist Streaks will apparently not be the only form of streaks in Modern Warfare.

According to the YouTuber, the game will also feature traditional equipment and support as both scorestreaks and killstreaks, giving players three different sets of things to unlock during matches.

Of course, there is no way of knowing if any of what the YouTuber has leaked to be legitimate or true, other than waiting for the global reveal event on August 1 to get the details from the horse’s mouth.

However, TheGamingRevolution has earned himself some credibility in the community, having correctly disclosed the existence of the 2v2 Gunfight mode that was later shown by Infinity Ward themselves.

In the past several weeks, he’s come out with a lot of leaked details about MW, such as the potential list of Perks, killstreaks, competitive modes, and the number of maps and weapons.

Whether or not those turn out to be accurate, only time will tell, and there’s not that much longer to wait anyway.