Things have gotten a bit hectic on social media after 100 Thieves’ pro Call of Duty announced their major roster move on January 28.

The move saw the org acquire former FaZe Clan player Preston ‘Priestahh’ Greiner on loan and move Maurice ‘Fero’ Henriquez to the substitute role, effectively taking him out of the starting squad for the upcoming CWL Pro League.

The move had many fellow pro CoD players perplexed on Twitter, including the likes of eUnited’s James ‘Clayster’ Eubanks, who publicly questioned the move in a debate with 100T CEO Matt ‘Nadeshot’ Haag.

Their debate apparently struck the nerve of 100T player Kenny ‘Kenny’ Williams, who hit out at Clayster and accused him of “loving drama” and “being a female” in a now-deleted tweet.

This sparked a war of words between Kenny and Clayster as the two pro player went back and forth on Twitter in what eventually became a heated argument. 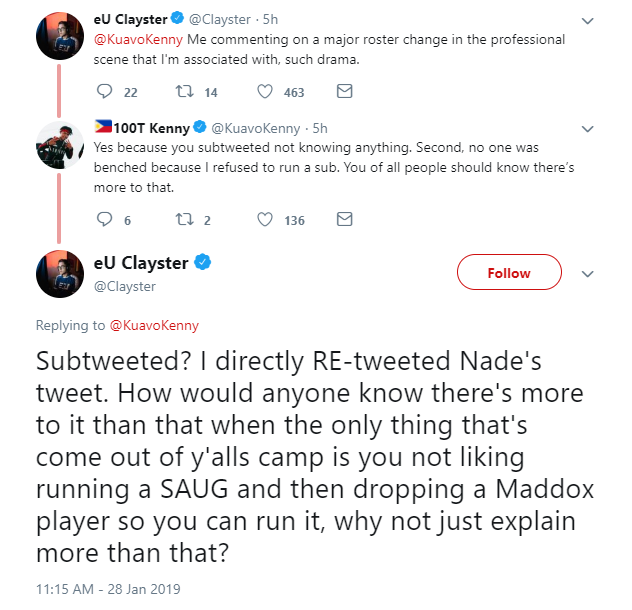 As he explained in the tweet above and in his debate with Nadeshot, Clayster’s main contention with this whole situation is that, from the outside looking in, it would appear that 100 Thieves have dropped Fero from their main roster just to help improve the struggling Kenny, despite the fact that Fero’s play had been satisfactory and was a big reason why the team had qualified for the Pro League.

Kenny did not approve of the rhetoric that Clayster was pushing, however, and the two wrapped up their argument by agreeing to disagree, to put it in mild terms. 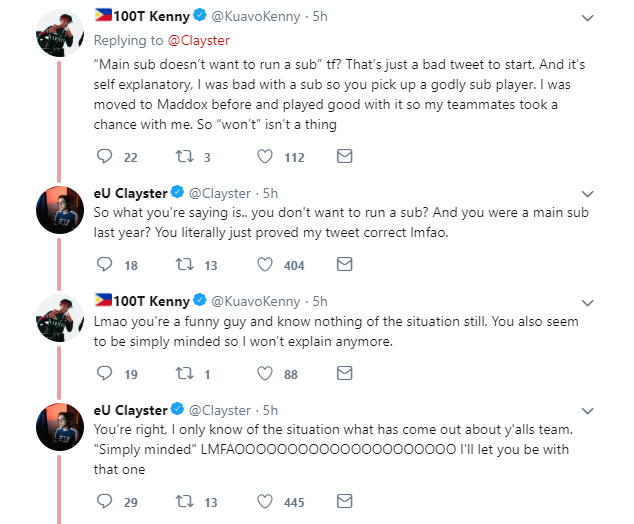 Clayster was not the only one publicly questioning this roster move; other prominent veterans such as eUnited’s Jordan ‘JKap’ Kaplan and Envy’s Patrick ‘ACHES’ Price were also uncertain about the whole thing.

Pro players turned analysts Anthony ‘NAMELESS’ Wheeler and Johnathan ‘Pacman’ Tucker were bit more understanding of the two sides’ perspectives, but did feel as though Fero deserved to be in a better situation team-wise heading into the Pro League.

The 100T roster situation is a tough one. One on hand, they all qualified and did their job. On another they needed a change so someone was getting screwed. Tough decisions as a team/team owner. Can't really fault them.

@f3rocitys Someone will pick you up. If not, they're stupid. Head up my dude :heart:️

Fero wasn’t 100Ts worst player but the move had to be made for he or Kenny for the greater good of the team. Going to be interesting during the player movement period to see how things shake up

MrDalekJD has opened up on his biggest wishes for Call of Duty: Warzone in the future on the CharlieIntel podcast, including more storytelling and a new map.

Jon ‘MrDalekJD’ Hutchinson is a beloved figure in the Call of Duty scene. Even though his content revolves around Zombies, he’s played the game for many years now, and the community values his opinions.

So, when asked on the CharlieIntel podcast what he’d like to see happen from Warzone in the future, people were listening. Spoiler alert, it’s in line with what most other players hope to see too.

MrDalekJD is known for his videos on Call of Duty: Zombies.

“The thing with Warzone is they [got] pretty good, well it seemed at the time, really good at telling an underlying story that was being slowly unraveled every season,” he said. “It was all to do with the rockets and Bunker 11 and Bunker 10 and all that. It was amazing.”

“I think if they just continue with that, that’s enough to keep me happy,” he added. “But I do think we are due for a new map. I love Verdansk to pieces. It’s a fantastic map. Massive props to Infinity Ward and Raven on that because it’s incredible.”

“But I think it is time for Treyarch to step in and bring in a new Cold War-themed Warzone map,” he said. It’s something that most players want and expect, and it seems like it’s only a matter of time before it happens.

MrDalekJD isn’t alone in his views, especially when it comes to wanting a new map. Verdansk has been fantastic, but it’s become a little stale to veteran players, and the show must go on.

Black Ops Cold War has already been out for several months now. So, a new Warzone map can’t be too far away. However, there still has been no official word on when we can expect it.

Until then, all we can do is sit back, relax, and twiddle our thumbs while we wait.