The Call of Duty League turned to Atlanta, Georgia on February 22-23 for the third event of its first-ever season. Eight teams battled it out for a share of the $100,000 prize pool and, more importantly, the 140 CDL points that were on the line.

After the early matches on Sunday, the Playoff Bracket was set, which meant that only four of the squads managed to make it out of their groups: Atlanta FaZe, Chicago Huntsmen, Minnesota ROKKR and Florida Mutineers.

The hosts continued to look sharp in their subsequent win against London, 3-1, winning the group and sealing their place in the semifinals. Meanwhile, Florida added to the Green Wall’s troubles with a 3-1 victory to eliminate them, meaning that OGLA are still winless on the season and have zero CDL points.

The final match of the group saw Royal Ravens face off against Mutineers, and in a result that probably not many expected, Florida won 3-2 to nab the final spot in the semifinals. 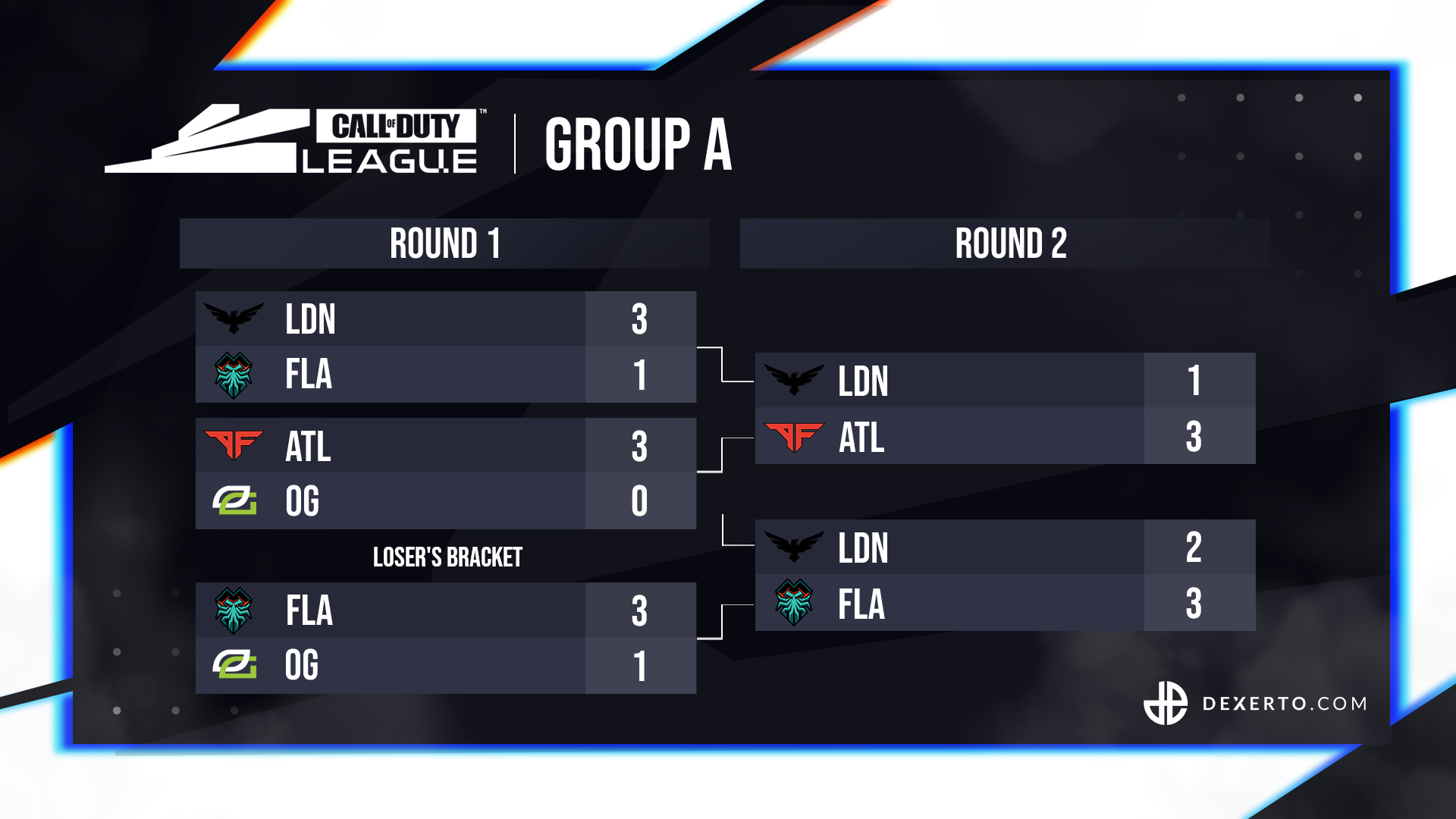 Minnesota ROKKR kicked off Group B with a strong 3-1 win against Paris Legion, followed by a hard-fought 3-2 victory by Chicago Huntsmen over Toronto ULTRA – a series that went all the way to a game five, round 11.

Huntsmen regained some of their form in the qualifier match, beating ROKKR 3-1 to advance to the semis and, perhaps more importantly, avoid an early meeting with Atlanta FaZe.

In the lower bracket, Paris took care of Toronto 3-1, knocking them out of the tournament and adding to their woes. They then faced Minnesota looking for revenge but were unable to find it, as the ROKKR won 3-2 and eliminated them from the competition. 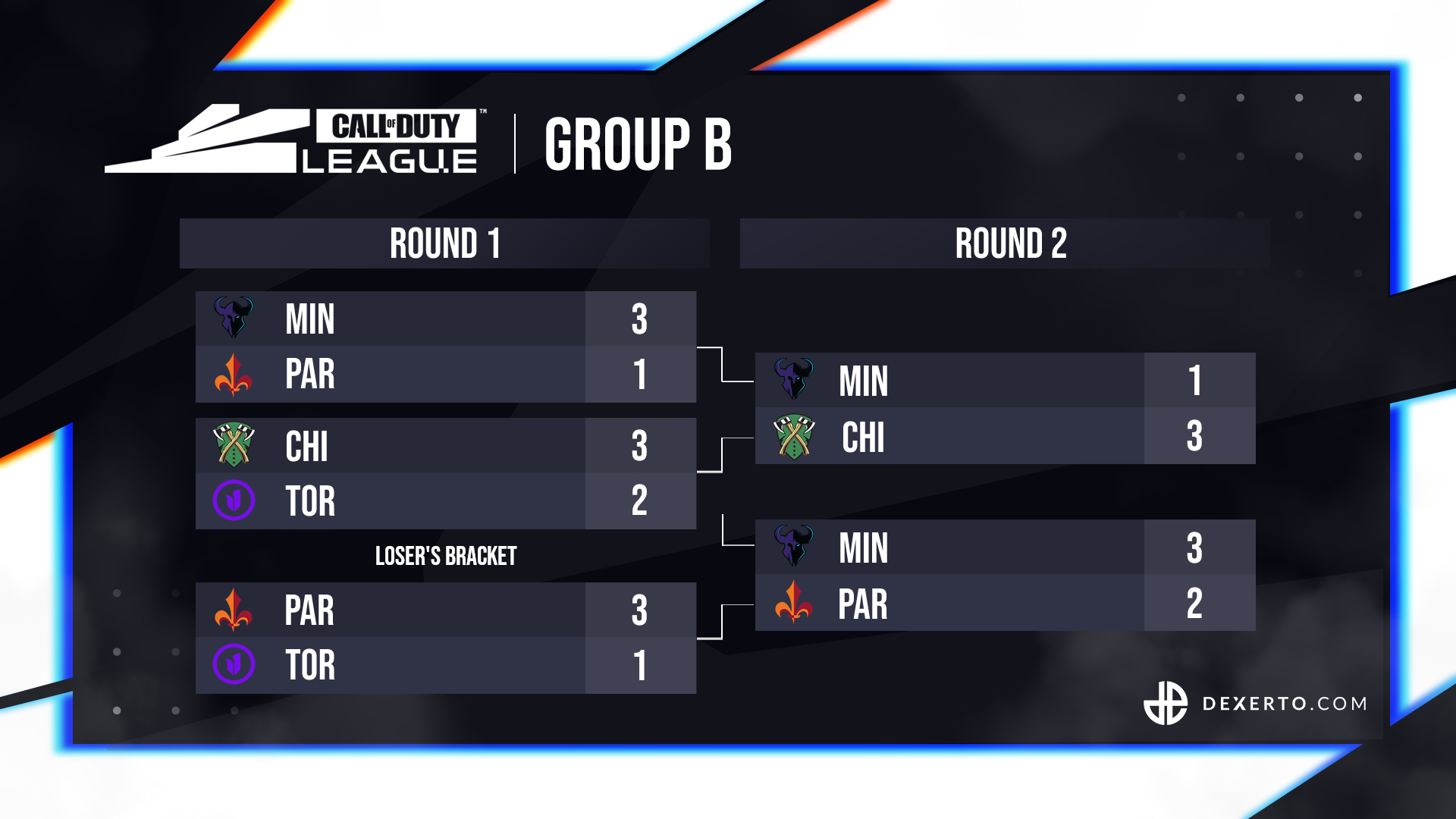 The CDL Atlanta Playoff Bracket featured two teams that almost everyone expected to make it that far – Huntsmen and FaZe – and two teams that were underdogs in their respective groups – ROKKR and Mutineers.

However, both matches turned out to be exhilarating affairs. Atlanta, heavily favored against ROKKR, stunningly went down 0-2 before regaining their form and pulling off an incredible reverse sweep.

A similar yet opposite scenario played out on the other side of the bracket – Chicago, big favorites against Florida, went up 2-0 before falling victim to a reverse sweep as Mutineers completed one of the biggest upsets of the season.

Florida @Mutineers complete the reverse sweep and are moving on to the finals vs @ATLFaZe! #FearTheDeep pic.twitter.com/cd5EHNlmsx

Unlike all of the other matches from earlier in day two, the Atlanta FaZe – Florida Mutineers Grand Final proved to be an extremely one-sided affair. FaZe struck first on St. Petrograd Hardpoint, winning 250-138, thanks to elite plays like this three-piece from Priestahh.

Atlanta had a bit of coming back to do on the second map, Search & Destroy on Gun Runner, but after falling behind early, they were able to catch up and ultimately win the game 6-4.

The third and final map of the series was Domination on St. Petrograd, and it was clear the Tiny Terrors were not going to let the Grand Final go to a fourth game as they took control late and won 146-136.

Cellium, who performed incredibly all weekend and again in the final series of the tournament, was named MVP.

Missed some of the action? Get up-to-speed with the weekend’s action via our CDL Atlanta hub, which has both days’ streams, interviews, and more.

For more information about the CDL season, including the full event schedule and current overall standings, make sure to check out our Call of Duty League 2020 season hub.