On August 29, the voice actor for the Apex Legends character ‘Pathfinder’ Chris Edgerly posted a gameplay highlights video on YouTube, showing him act in character while playing the robot in matches.

Apex Legends has a roster of unique characters that range from an interdimensional shifter to a mad scientist. But one of the most popular characters in the team-based battle royale is the colorful robot named Pathfinder.

The scout character often quips optimistic voice lines, and sports a smiley face on the screen on his chest. But on August 29, fans were treated to a gameplay highlight video of the voice actor playing him in character.

Jumping into the match, the voice actor selected his own character, which prompted the robot’s infamous voice line “Excellent, time to destroy more opponents” which Edgerly hilariously responded “Not if you’re me!”

When one of his teammates left the match early, the voice actor cracked a joke “Boy, someone timed out. Did I offend them? I do that sometimes”.

Then, after meeting an early death, he began to speak to his remaining teammate who he was spectating and said “I would root for you, but I got other ways to die” before leaving the match. 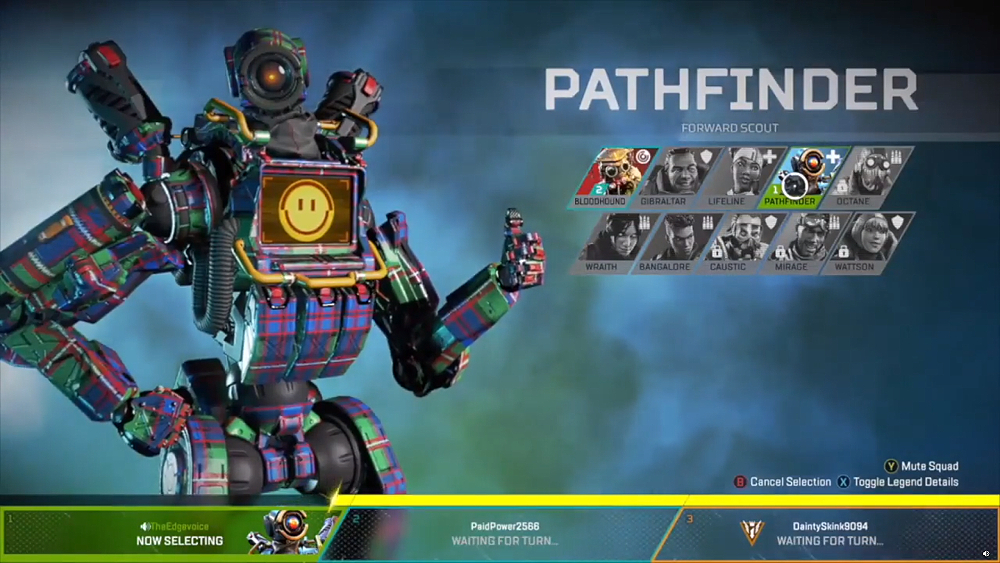 Another hilarious moment was when the voice actor is hunkered down into a long range shootout with an opponent. After firing off multiple rounds and hitting the other player, he was forced to reload.

During the reload animation, Pathfinder said “Reloading” except this time the voice actor followed that up with “take that asshole!” After disengaging from the fight, Edgerly laughed “Uh oh… I made him mad.”

The voice actor had a blast as he continued to interact with all of the varied characters lines that pop up after interacting with in game items, weapons and after taking damage.

Perhaps the most wholesome aspect of the video is him using the character to talk to his teammates, as they were surprised to find out that the actual Pathfinder was talking to them.

Next time you see a Pathfinder in your match, you never know – it could be Chris Edgerly.