One Apex Legends player has devised a buff for Loba, the High Society Thief, who many believe has fallen towards the bottom of the pile when it comes to the game’s Legend pool.

Season 5 saw the addition of Loba, the High Society Thief who has a history with Revenant. While many players found her a refreshing shake-up to the meta in the season of her addition, she has fallen closer to the bottom of the pile since.

She’s not necessarily a weak character, but she’s certainly not in the same league as the game’s stronger legends like Mirage, Wraith, or Gibraltar.

Loba was added to Apex Legends as the new character for season five.

Her falling viability has seen a host of players calling for her to be buffed in Season 6, with some even proposing their own reworks. One of these is Apex Legends fan ‘ittvoy‘, who shared their ideas for the burglar’s buff to Reddit.

The Redditor shared their buff ideas, reworking some of Loba’s existing abilities to make her considerably stronger.

First up is the Ultimate Ability, which has been completely overhauled. “When picking up a gun in the black market, you get all the attachments and one stack of ammo for that weapon and it will all be in one weapon slot,” the Redditor said. “You can also steal loot from care packages and supply bins.”

Other abilities include various black market access, all of which would make Loba significantly stronger. 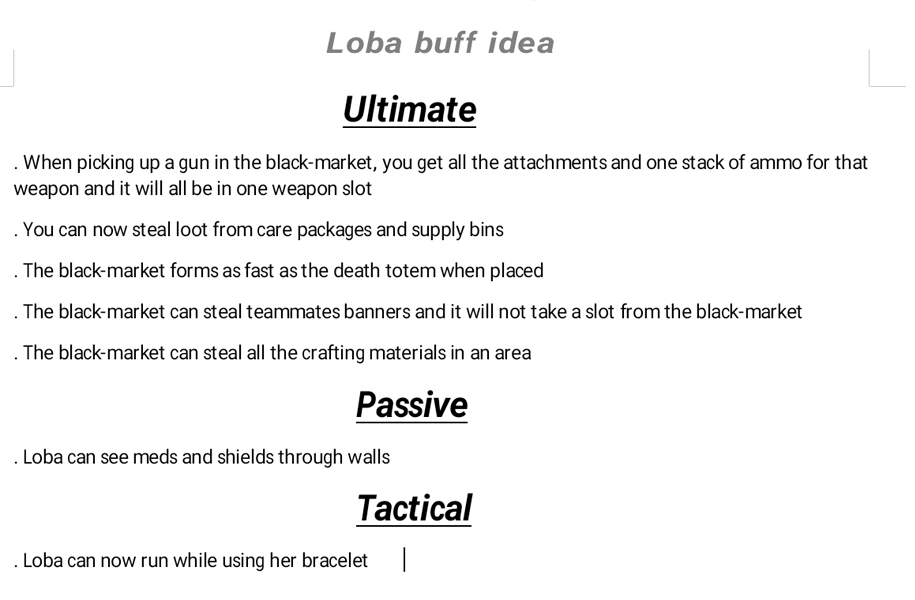 Furthermore, the Redditor has proposed reworks to both Loba’s Passive and Tactical abilities. Her Passive would now allow her to see all medical supplies and shields through walls, while her Tactical would be buffed to allow her to run while using her bracelet.

Below are Loba’s current abilities in Apex Legends, so you can fully compare the buff ideas with how she stands now:

Whether a buff for Loba is on its way anytime soon remains to be seen, but some Apex Legends players clearly believe it’s necessary.