Apex Legends character idea would be the ultimate Support Legend

An Apex Legends player has created the ultimate support character that would perfectly rival the likes of Lifeline and Wattson.

The likes of Wraith, Pathfinder and Gibraltar often find themselves as the star of the show in the Apex Games. Whether you’re grappling your way behind enemy lines with Pathy or taking on an enemy team head-on with Gibby, these three Legends are considered to be in a league of their own.

With that said, the big hitters wouldn’t be able to make their flashy plays if it wasn’t for the support of Legends such as Lifeline and Wattson.

But that’s just about where it ends. Aside from Lifeline and Wattson, there is a distinct lack of supportive Legends roaming the servers — and that’s where this character concept would slot straight in.

All of the Legend’s abilities revolve around supporting their allies in combat. Let’s take a look at each of the character’s abilities. 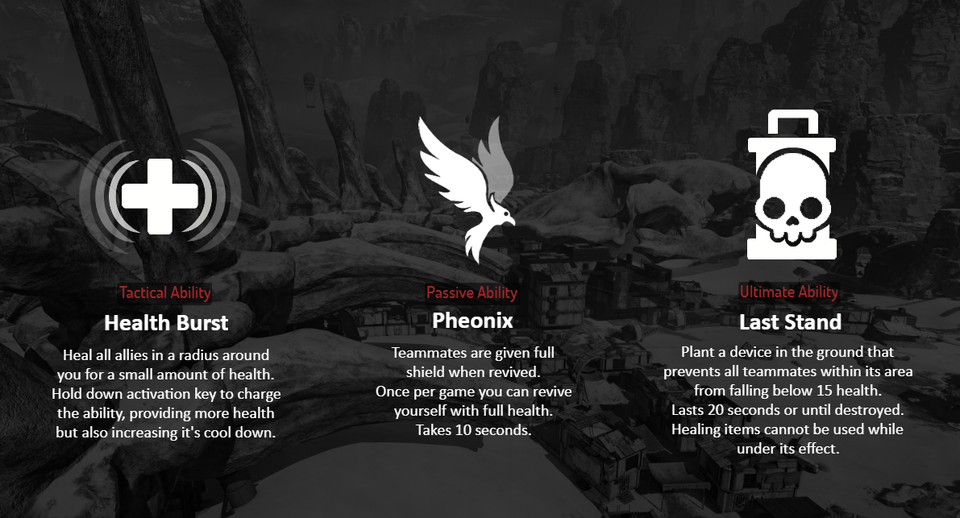 Starting off with their ‘Health Burst’ Tactical, the Legend would possess the means to heal nearby teammates within a specific radius, which would prove indispensable towards the endgame circle, when nearby loot is scarce.

The ‘Phoenix’ Passive doubles down on Lifeline’s Combat Medic Passive, by reviving a teammate with full shields… After all, there’s nothing worse than being revived, only to be downed again immediately after since your health is so low!

Although, it’s the Ultimate where this character comes into their own. Last Stand would warrant all nearby allies (approximately the radius of Wattson’s Interception Pylon) a safety net of health for 20 seconds.

This would be especially useful when you find yourself stuck between two enemy squads as it would ensure that you don’t get ‘third-partied’ again! To balance it out, anyone experiencing the effects of Last Stand wouldn’t be able to use healing items.

While, yes, there is scope for fine-tuning the Ultimate (such as how it would work with Octane’s auto-health regeneration), it would certainly fit into the current meta well.

Of course, as with any concept, there would be a few creases to iron out, but the foundations of the character would be the perfect addition to an otherwise scarce roster of support characters.