According to an email posted by esports insider Rod ‘Slasher‘ Breslau, Riot Games have cancelled upcoming gameplay capture events in Los Angeles and Barcelona due to fears of the coronavirus.

Slasher had reported on March 2 that Riot planned to bring high profile pro gamers and streamers from North America and Europe to their headquarters in Los Angeles and Barcelona to possibly promote the game’s beta.

These promos would have featured pros and well-known names from a bunch of games, including CSGO and Overwatch, according to Slasher, but now Riot seems to have put their plans on hold.

A day later on March 3, Breslau followed up with an email he said was from Riot informing recipients that the company was cancelling the gameplay capture events due to concerns about the ongoing coronavirus outbreak.

“It is with a heavy heart that we have decided to cancel our VALORANT gameplay capture events this month in Los Angeles and Barcelona,” Riot said in the email. “Due to unforeseen circumstances surrounding COVID-19 (Coronavirus), as a company, we need to stand by our policy of putting Players first, and unfortunately this means steering away from our original plans to meet you in person at our event.”

Even though the live events are canceled, Riot added that they’re trying to make a “digital solution” available to select players for a possible preview of the upcoming beta. 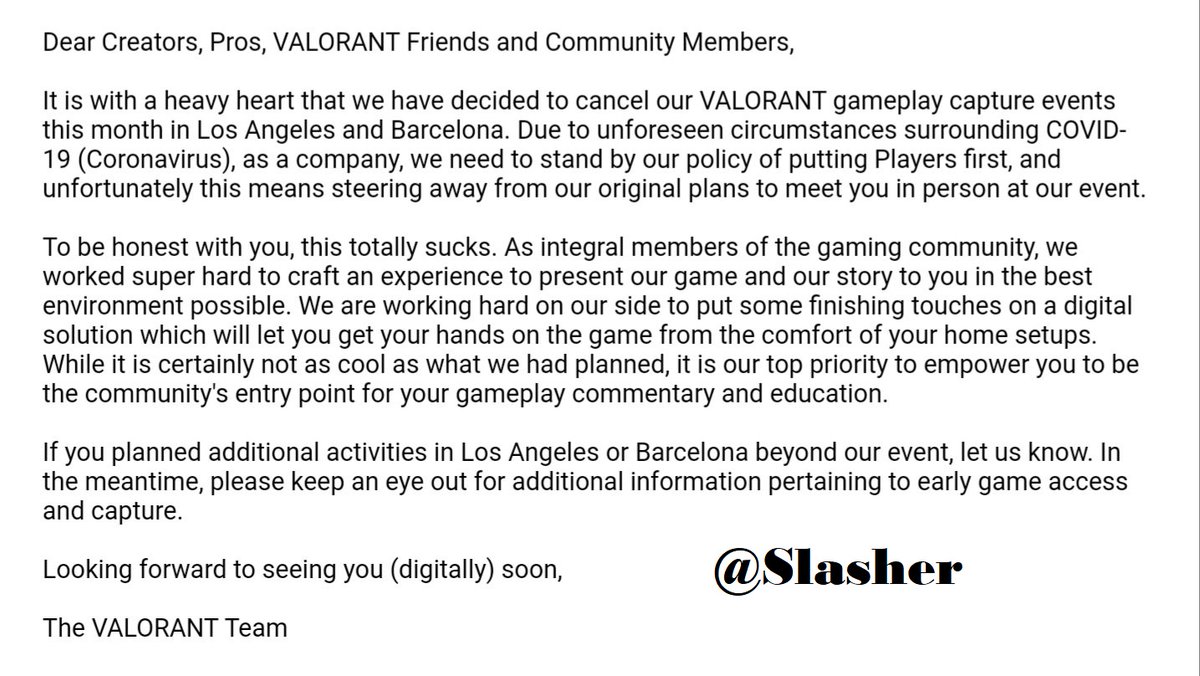 “We are working hard on our side to put some finishing touches on a digital solution which will let you get your hands on the game from the comfort of your home setups,” the publisher added.

“While it is certainly not as cool as what we had planned, it is our top priority to empower you to be the community’s entry point for your gameplay commentary and education.”

So even though those chosen lucky few won’t be able to attend live events anymore, it does look like we’ll still be able to get an early preview of the game when Riot rolls out their digital option.

Valorant already has plenty of players from multiple different games excited about trying it out.

While talk of a possible upcoming Valorant beta is everywhere you look on social media at the moment, we still don’t have a concrete date for when could possibly get going.

We do know from the announcement trailer that Riot plan to release the game in some form in Summer 2020 and until then players around the world will eagerly be waiting for their chance to try it out.

As always, we’ll continue to bring you the latest details as more information becomes available. For all Valorant news, updates, info, and content, make sure to follow us on Twitter @ValorantUpdates.