Excitement is building for Riot Games’ upcoming tactical shooter Project A, which is expected to be unveiled with the title Valorant. The already growing community on Twitter, Reddit, and Discord are expecting more information to be released very soon.

Months after its initial announcement back in October, hype around Project A has skyrocketed in February, with fans and players from other popular esports titles eagerly awaiting Riot’s newest endeavor.

A community of excited fans anticipating the game’s release has slowly begun to swell, and their efforts online have led them to believe that a Project A announcement is coming on March 2.

Project A will be Riot’s first game outside of the League of Legends universe.

Riot Games has registered various trademarks for the title ‘Valorant’, and the @PlayValorant Twitter account appears to be registered under the company’s email address, so ‘Valorant’ is expected to be the game’s official name.

On that Twitter account, there is a cryptic header and description that members of the community believe indicate an announcement date. The banner image features the number 2, and the description has 3 slash marks. Various Project A communities suspect this means that they’ll be getting an announcement on 3/2, or March 2.

These slashes most likely represent the 3 days remaining until the big announcement they have planned on March 2nd ? pic.twitter.com/TvlelPbEPT

This estimated date is actually backed up by a Riot Games employee who said in a popular Project A community Discord that “things are happening” on that date. 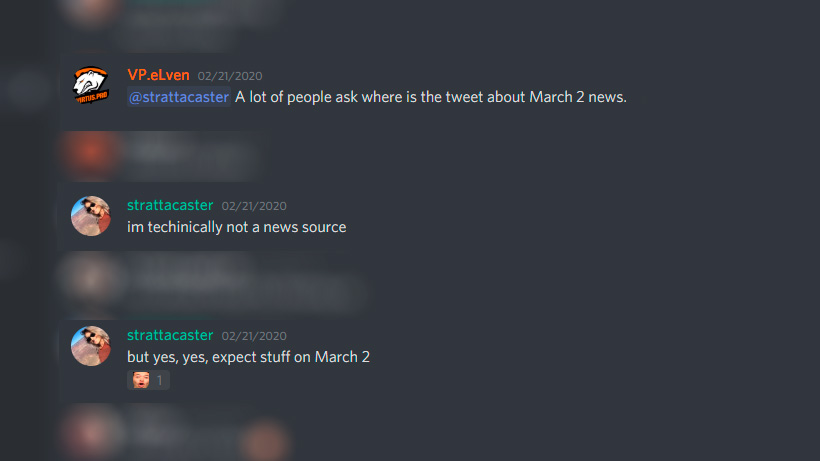 That’s Global Influencer Programs Lead on Project A, Aliana ‘strattacaster’ Miller saying that March 2 is the date to watch out for.

This date was also teased in a Spanish article about Project A earlier in February.

Fans of the upcoming game have more reasons to be excited than just an announcement. The February hype for the Riot shooter was kicked off by famed CS:GO caster Henry ‘HenryG’ Greer, who tweeted at length about the game and heaped tons of praise on it.

One of the most exciting elements of the game to me was the map design. They have been beautifully created and follow Counter-strikesque familiar lanes and choke points. With the focus on game-play substance, rather than flowery aesthetics.

After that, leaked images of potential characters appeared online, prompting discussion about the heroes’ abilities and the game’s similarity to Overwatch. Project A will likely draw more attention from CS:GO fans as well, as former pro Braxton ‘Swag’ Pierce announced his plans to pursue a competitive career.

If an extended look or more information regarding Project A is indeed revealed on March 2, you will certainly find all the info you’re looking for here on Dexerto.