Ubisoft has announced that it will be devoting more resources to quickly address exploits plaguing Rainbow Six Siege.

In a developer blog update, the Rainbow Six team provided an exploit post-mortem to show they resolved a series of problems and what is in store for the future.

“These switches and fail-safes, which targeted the exploit methods only, were never intended to be a full fix. Instead, it was a call made by the team after weighing the cost of the removal of Clash and two gadgets on gameplay health. They were released to the live servers soon after with the challenge to the community to report any further occurrences.”

Ubisoft said their fail-safes needed to meet several requirements. The developers described them as “surgical”. The goal was so that it would “not cause any type of regression or unintended collateral damage, easily modifiable for rapid response, and require minimal testing for fast delivery.”

Additionally, Ubisoft implemented “Global Ordering”. Ubisoft described this is a change to how information is given to the server. The example given was when the player uses a gadget, their Operator sends the messages “I am equipping my gadget” and “I am using my gadget” in a sequence. 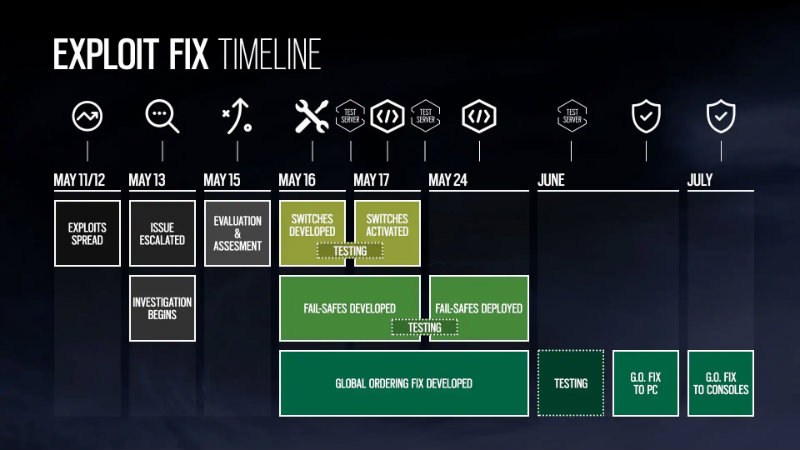 “Previously, the order in which these messages were delivered to the server were only guaranteed per game object. This meant that there was also a chance for failure when messages go missing or are delivered out of order to the server,” the update explained.

“The exploits took advantage of that flaw in our network protocol by spamming actions simultaneously, which increased the probability that these network messages would fail to be properly received.”

“We have evaluated and weighed the additional bandwidth cost and while it will increase slightly, it will not affect your gameplay experience. This should prevent any further issues with out-of-order delivery of messages and any similar exploits,” Ubisoft explained.

“The exploits and their impact on the community have also highlighted the value of Operator and gadget switches, and the need for us to have greater control over Operator and loadout configuration on the live servers.”

Ubisoft concluded the update by announcing the dedication of additional resources to ensure a quick response to any future exploit.