The best tips to help you win in GO Battle League

GO Battle League Season 1 is well underway. Here are some tips to help you rack up the wins in the increasingly competitive Pokemon Go PvP mode.

Getting any advantage over trainers is essential – after all for every winner there is a loser. Trainers compete with one another from all over the world in an attempt to ascend the Pokemon Go battle ranks.

It looks like trainers have brought their A-game and going on a winning streak is proving tricky. With the competition so fierce and the best rewards exclusive to those who win four of five battles, winning is a must for many.

Here we offer some tips to help you win as many battles as possible. The standard of matches suggests trainers will need every advantage they can get hold of.

These tips will focus on general gameplay, rather than which specific Pokemon to use. We have other guides for this broken down by Great, Ultra and Master League in the links below.

The first one may be obvious to some but it’s so important that it can’t be said enough – make sure your three Pokemon are of a variety of types! Doing anything but will leave your team open. Sure, you could get lucky but this is far from a strategy that will work in the long-term.

Which Pokemon to start with?

There’s no correct answer to the question because no matter which you choose, you can be vulnerable should your opponent pick its weakness. Nevertheless, you can minimize that risk.

Normal and electric-types only have one vulnerability – fighting and ground attacks, respectively. So, from an odds standpoint, it may be wise to start with one of these.

Tyranitar goes against this logic but this is one species that’s performed well for us as our starting Pokemon. There is more to consider than just typing, however.

Then there are also your opponent’s Protect Shields to consider, which we allude to below. Selecting a Pokemon that generate Charge Moves quickly, albeit weaker ones, will tempt your adversary into using their Protect Shields. This is partly why you see trainers leading with Pokemon such as Scizor in Great League and Charizard/Giratina in Ultra League.

Also, with so much damage being dealt by Charge Moves, a bulky Pokemon is important in order to absorb that damage. A species’ attacking prowess is more affected by the actual moves rather than attack IVs anyway.

Damage is obviously an integral part of which moves are best. However, with Charge Moves playing such a vital role, Fast Move’s energy per second is a very important statistic.

For example, if we take a Gyarados with Hydro Pump and compare it to a Scizor with Night Slash, then they are very different in a PvP setting. Night Slash will allow you to build up Charge Moves a lot quicker than Hydro Pump.

This is because Night Slash requires less energy to earn whereas the more powerful Hydro Pump. It actually charges more than twice as quickly. 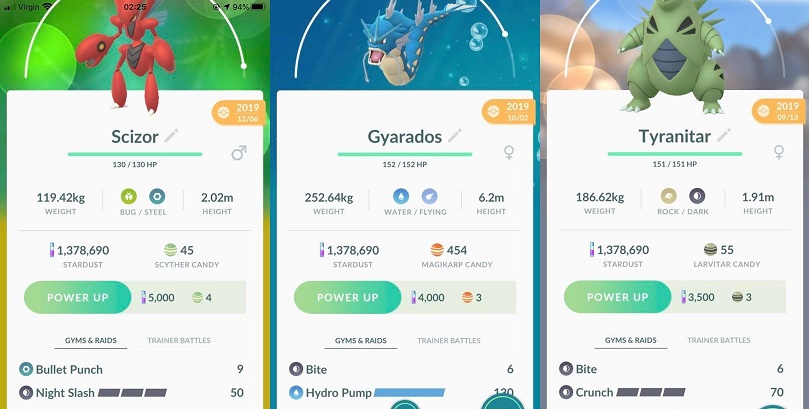 You should consider the type, power and energy of moves when deciding your team…

This is noteworthy because you may not have enough time to build up a move like Hydro Pump. In addition to that, moves like Night Slash force your opponents to burn through their Protect Shields – well, either that or take damage.

We’d recommend researching the whole concept and as many moves as possible so you can understand where your Pokemon’s move set stands in a PvP scenario.

Here are tips of the more advanced variety summarized:

These tips are all well and good but they don’t help you decide which three Pokemon to send into battle. Which species you should choose depends on what league is currently active.

There’s plenty to more to learn about GO League Battles but these tips should put you in a good position to rack up a few wins. Pokemon Go’s Battle League Great League portion has already concluded and we’re currently in the middle of Ultra League.