Niantic are dishing out another wave of Pokemon Go bans. Anyone that uses third-party software that connects to your Pokemon Go account is under threat…

PokeGo++ and iTools under threat

Specifically, the PokeGo++ and iTools, the iOS based Pokemon Go spoofing software, has been targeted. Many of its users are reporting receiving bans varying between one week and two months.

The above software is considered cheating by Niantic as it breaks the Pokemon Go terms and conditions. The software allows you to set coordinates, teleport, move with a joystick and check Pokemon IVs.

While there are increased reports of bans, some Pokemon Go spoofers are responding to these reports stating they haven’t been affected.

The sentiment seems to be banning has increased over the last week or so, but they are isolated incidents.

As per the official Niantic Pokemon Go website, there are three types of ban.

Disciplinary actions: If this strike is issued, you will see a warning message within the Pokémon GO app informing you that we have detected cheating on your account.

In addition to this warning, your gameplay experience may be degraded in the following ways for the duration of the warning:

Duration: This strike will last for approximately 7 days. After this period, your gameplay experience will fully be restored.

Disciplinary actions: If your account is issued a second strike, you will temporarily lose access to your Pokémon GO account. When attempting to log into the game, you’ll be presented with a message stating that your account is suspended. You will not be able to bypass this message.

Duration: This strike will last for approximately 30 days. After that period, your account access will be restored.

Disciplinary actions: If you receive the first and second strikes and continue to cheat, your account will be permanently banned. 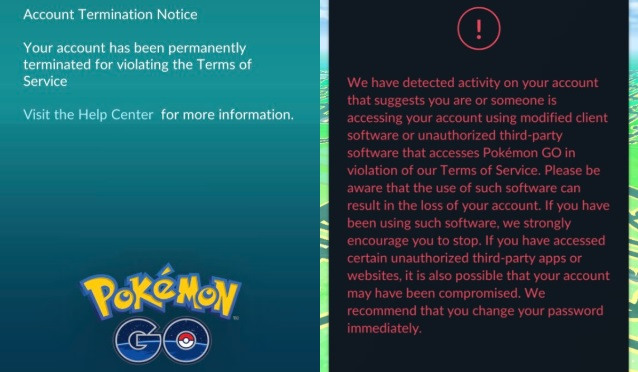 There is also a particular ban being called a “soft ban”. This is a consequence of having suspicious speed and/or catching too many Pokemon.

A soft ban results in the inability to spin Poke stops or catch Pokemon. It is believed there is a 3,500 catch limit per week.

Some Pokemon Go players may be unaware that spoofing even exists. However, Niantic’s recent ban wave and the reaction to it is evidence to the contrary.

There are thousands, estimated to be more than 100,000, Pokemon Go accounts that cheat. Moreover, there is a Pokemon Go spoofer sub-reddit that has more than 35,000 subscribers. This shows just how popular spoofing is.

Cheating in Pokemon Go is always a controversial topic, with some players believing it is justified and others being very much against it.

The recent ban wave will be concerning for the former and welcomed news for those against it.