A new Gigantamax Pokemon is coming to Sword and Shield — Snorlax. Just when you didn’t think the sleeping Pokemon could get any bigger it’s going to be Gigantamaxed!

It will coming to Max Raid Battles on December 4 and will stay there until January 5, 2020. The new super-sized Snorlax will grow to more than 35 meters in height but its weight isn’t specified.

Its Torterra-like appearance can be explained by the berries and small rocks that have got tangled in Snorlax’s belly fur. The power of Gigantamaxing has caused them to undergo explosive growth which has even resulted in a tree growing on its stomach.

Trainers who have already travelled through the Galar region will know that Gigantamax Pokemon have special G-Max Moves, which provide some form of additional effect as well as damage. Snorlax’s special move is called G-Max Replenish.

The official Pokemon Sword and Shield website describes the new G-Max Move as: “When Snorlax is Gigantamaxed, its Normal-type attacks will be transformed into G-Max Replenish. G-Max Replenish doesn’t merely deal damage to targets—it can also restore any Berries that Gigantamax Snorlax’s allies have eaten during the battle!” 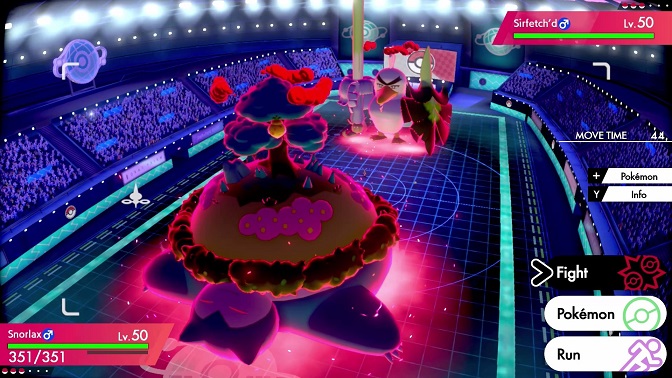 You can see Gigantamax Snorlax in action a trailer the Pokemon Company have released. Somewhat curiously the video also shows you evolutions of the three starter Pokemon — Grookey, Scorbunny and Sobble.

It seems a little strange they would release now, with the game nearly two weeks old. However, it could be a way to promote the game in time for the Christmas period.

A more sinister reason could be their marketing strategy was affected by the batch of Pokemon Sword and Shield leaks in the build-up to the game. The Pokemon Company appear to be so upset by them that they have actually taken legal action against those who released them.

Gigantamax Butterfree is currently appearing more frequently than other species. Judging by the Snorlax news though, it looks like there will be a new Gigantamax species on a monthly basis. Which other Pokemon could be next?