Gambler will step down from the Seoul Dynasty roster ahead of Season Two of the Overwatch League, moving to a streaming position with Gen.G Esports, the esports organization that operates the Dynasty OWL team.

Formerly of LuxuryWatch Blue, Gambler joined the Seoul Dynasty in the Overwatch League mid-season signing window, competing for the team in stages 2-4 of the regular season. Unfortunately, the Dynasty weren’t able to reach the season playoffs, ultimately finishing in eighth place overall. 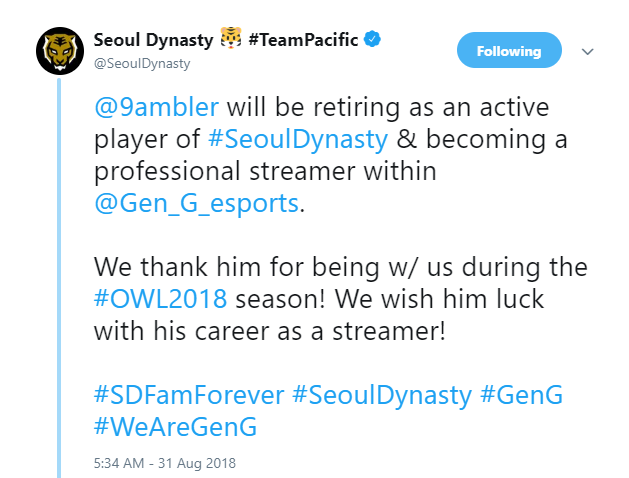 Gambler’s retirement leaves Yang ‘Tobi’ Jin-mo as the team’s only main Support player at the current time. Though famed for his Lúcio and reportedly a key contributor to shot-calling in Season One, Tobi did come under criticism for lacklustre Mercy play, a hero that Gambler excelled at.

It remains to be seen whether Seoul Dynasty will look to sign another main Support to shore up the position. They have until September 9 to extend contracts with current players and trade with existing League teams, after which they will have to wait until after the exclusive window for expansion teams ends on October 8 before signing any free agents.

The only addition announced so far by Seoul Dynasty is that of Baek ‘Fissure’ Chan-hyung, former main tank for Los Angeles Gladiators and a Season One MVP candidate in the eyes of many.