Profit and Gesture have been with the London Spitfire since the Overwatch League’s inception, but according to a new report from ESPN Esports, that’s about to change before the 2020 season.

UPDATE 10/22: The Seoul Dynasty announced on Tuesday, October 22 that Profit and Gesture would both be joining the team for Season 3 in 2020.

According to a report from Jacob Wolf, Joon-yeong ‘Profit’ Park and Hong ‘Gesture’ Jae-hee are joining up with the Seoul Dynasty for the 2020 season.

The Dynasty have not had a great run the past two years and are clearly looking to reverse their fortunes after bowing out of the playoffs at 7-8th place. This came after the team missed the playoffs entirely in their inaugural season.

For the Spitfire, this move came as unexpected as Gesture and Profit were two of their only players that were on an extended contract moving into the 2020 season. This led many to speculate that London would be rebuilding their roster around them, but this is apparently not the case.

Gesture is known for his outstanding main tank play, with Reinhardt and Orisa being particular highlights. Given the prevalence of barriers in the current meta, it could serve the Dynasty well next season if things don’t shake up by February. 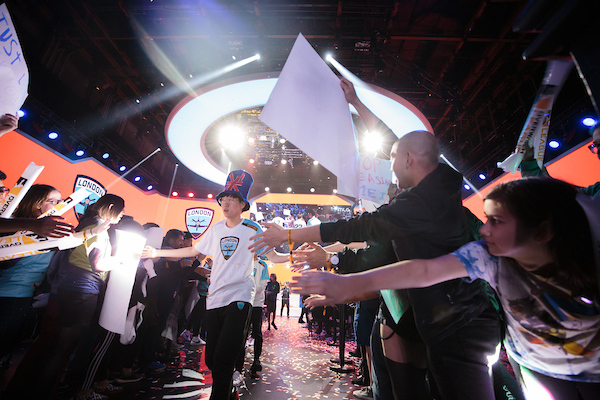 Gesture leaves the stage after London was eliminated in the OWL 2019 playoffs.
[ad name=”article3″]

Profit and Gesture have played together since their first professional games, as they both got their starts on GC Busan. Profit is well known for his Tracer and Hanzo play, something that served him and Gesture well when they helped the Spitfire take home the OWL 2019 championship.

However, they finished 7th-8th in this year’s playoffs, meaning something had to change for London. They’ve decided on an apparent complete roster shakeup.

ESPN says that Seoul are expected to be aggressive in the offseason, with several star Korean free-agents on the market, such as Meko and Flow3r from the NYXL.

The Overwatch League is moving to a traveling, all-homestand format. Building a superstar roster of South Koreans could very well be playing into Dynasty’s plan to pack the house during their stints at home in Seoul.

Dexerto has reached out to London and Seoul for comment.