Overwatch devs have been known to introduce humourous, temporary updates to the game to celebrate April Fool’s day, and 2020 might just be the wildest year yet because they gave almost everyone and everything they could a set of googly eyes.

The update definitely makes games about 1000 times funnier, but the googly eyes also appear on the main menu, in highlight intros, and even in the Hero Gallery.

Seeing allies and enemies with large, bulging eyes during games is the most entertaining though. It’s sort of crazy how adding big, funny eyes to everyone can really change the mood of an Overwatch match. 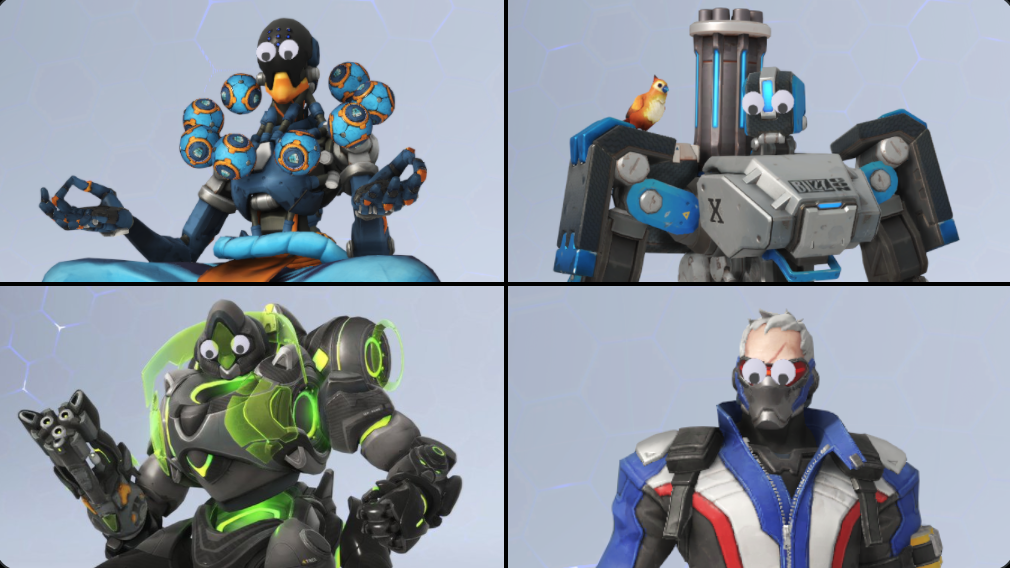 As you can see in the above images Tweeted by Overbuff, it seems like no detail went overlooked – for example, hero skins with only one eye, like Torbjorn’s and Ana’s, will only get one googly eye.

This doesn’t explain why Bastion, who has no eyes that we know of, gets a pair, but it doesn’t make the glorious image of his beautiful, bug-eyed stare any less hilarious.

It’s not just heroes that received the makeover either, certain abilities like Torbjorn’s turret did, and amazingly, Hanzo’s dragons are also sporting the eyes during his ultimate.

"See through the dragon's eyes" pic.twitter.com/tqGqjMznyu

Obviously, everyone’s favorite Omnic B.O.B. is only improved with the addition of googly eyes, but several hero abilities and forms are missing the joke.

Bastion’s turret and tank mode don’t feature the add on, and it’s also missing from Symmtra’s turrets and teleporter, but most notably the eyes are absent from D.Va’s mech. A huge missed opportunity to stick some obnoxiously large peepers on there.

If you’re worried about not seeing anything though, don’t be, because they’ll be practically everywhere else for at least the next couple of days.

Even though it was a bit early, as far as April Fool’s pranks go this one was a pretty brilliant move by devs, and it really doesn’t get in the way of gameplay once you get over the initial wave of laughter.

April Fool’s falls during the 2020 Archives event as well this year, so if you log on to check out the madness, you could get a few new skins as well.