If you’re looking for an Overwatch hero concept that brings together the impressive innovation of Vishkar Corporation, the strength of a warrior, and the presence of royalty – you have come to the right place.

Blizzard Entertainment’s game has attracted one of the most creative online communities since the game’s initial May 2016 release, with players taking their experience from the game and forming their own vision for brand new additions – whether they be cosmetics, weapons, or even new additions to the hero roster.

Well, a new creation uploaded to the ‘Blame The Controller – Overwatch‘ YouTube channel is a perfect example of that, and it looks pretty much game ready. 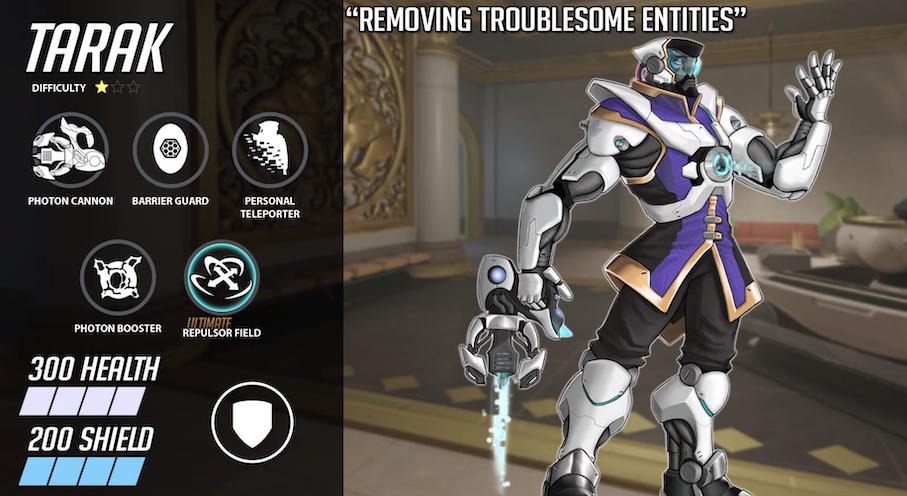 The Tarak Overwatch concept has a similar outfit to that of other Vishkar members, with a twist.
[ad name=”article2″]

The hero concept, which has been named Tarak, was born out of a clear creation process – most of which is outlined in the video below. The YouTuber wanted to create an Overwatch tank that offers backline protection, a tank with speed, and – of course – an omnic that was created by Vishkar.

“This omnic would be primarily constructed from hard light materials and incorporate the absolute finest in Vishkar technology,” the description of the character states, with it being labelled “the finest and most advanced omnic ever created.”

Tarak is an off-tank with a number of unique abilities, such as Photon Cannon, its main damage mitigation tool Barrier Guard, an ultimate of Repulsor Field and a few more, which are explained in further detail throughout the video.

Photon Cannon would be the character’s primary weapon, with a damage of 12 per hit. Barrier Guard would provide the character with a huge shield, ranging over two meters, and would allow him to still attack while the guard is up.

The ultimate, however, would allow the hero to push enemies away pulse by pulse, while giving Tarak the opportunity to attack them while this takes place.

It’s unlikely that the concept hero will ever make it into the official Overwatch game, but it won’t stop its creator and fellow fans from imagining what Blizzard has lined up next for them.