The Overwatch Practice Range has been roughly the same since the game first came out, with minor changes made to the training bots such as having them say “hello” back to the player. At long last, the Practice Range has received a long-requested upgrade thanks to Workshop guru PMAJellies.

The new Practice Range, dubbed Practice Range 2.0 by PMAJellies, has some neat features to help players improve their aim, snipe, and even get used to being Nano Boosted.

One of the cool new features added is a jump pad off by the far right side of the range. Accessing the high ground will give players an area to shoot at oncoming Symmetra turrets to help improve accuracy.

Shooting at Symmetra turrets can help improve your aim.

Amusingly, the size of the turrets is perfect for precise crosshair positioning and should help players learn to pinpoint their shots.

Using character models and set movements, players also have the opportunity to snipe enemy Widowmakers out of the sky during their grapple animation, practice landing shots on airborne Pharahs and line up shots on teleporting Reapers.

However, by far one of the coolest parts of the new Practice Range allows players to get Nano Boosted by pressing the interact key. It’s cool to see just how much more damage you can rack up with Ana on your team.

As previously mentioned, players can also spawn in a Baptiste to place an Amplification Matrix or a Mercy to pocket them.

Additionally, by crouching and pressing interact, players can instantly receive a free ultimate, which means anyone looking to practice their Dragon Blades or Primal Rages can do so without killing a bunch of bots to build one.

Best of all, with patch 1.43, players can load up this improved practice range while they’re waiting in a queue. Practice Range 2.0 can be loaded up in the Overwatch Workshop by using the code BTRZE. 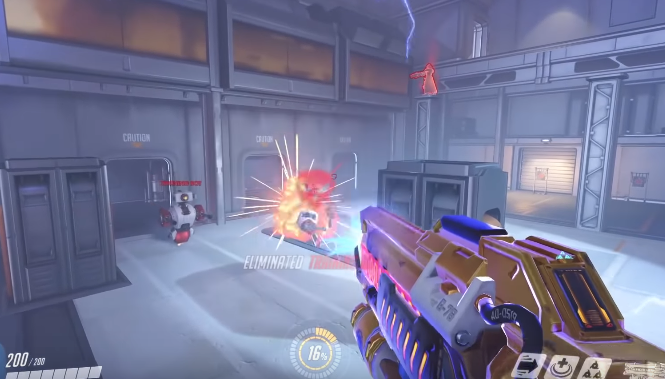 You’re powered up, get in there!

While it may not be the official change to the Practice Range that everyone was hoping for, this mode definitely provides enough cool goodies to help players warm up before going into a game.

It will be interesting to see if the range gets any sort of update when Overwatch 2 is finally released.