While Overwatch players are in the thick of Mercy’s Recall Challenge, the Overwatch team at Blizzard unveiled the History of Mercy on November 27, giving fans a fascination look at the inspiration for and early concepts of the iconic healer hero.

As metas change and new characters are added, Mercy has always been a staple for casual and competitive Overwatch players. Since the game’s launch in 2016, she’s been one of the most played heroes, and one of the most cosplayed as well.

Currently, Overwatch players are grinding their way to wins with the healer as part of Mercy’s Recall Challenge, with aspirations of earning her Legendary Dr. Zeigler skin. But as they’re doing that, the developers have given fans a peek behind the curtain of how Mercy got to where she was today.

From drawing to legendary status

According to game director Jeff Kaplan, the possibility of a character like Mercy stemmed from the desire to have a rich diversity of character and class types. That was first suggested by hero designer Geoff Goodman, who wished for a game with 50 very-focused, different classes instead of a class-based shooter with only six or nine.

The current character descends from a developed hero known as the Guardian. The Guardian featured a set of abilities that included a version of the present-day Resurrect and healing beam. The original hero’s weapon was known as the Stinger, and an ability titled Salvation.

After tweaking the abilities, the team altered the Guardian’s appearance. The team shared a collection of early concepts of the Guardian as it transformed into Mercy. The name Mercy comes from an original name for the Pharah character. 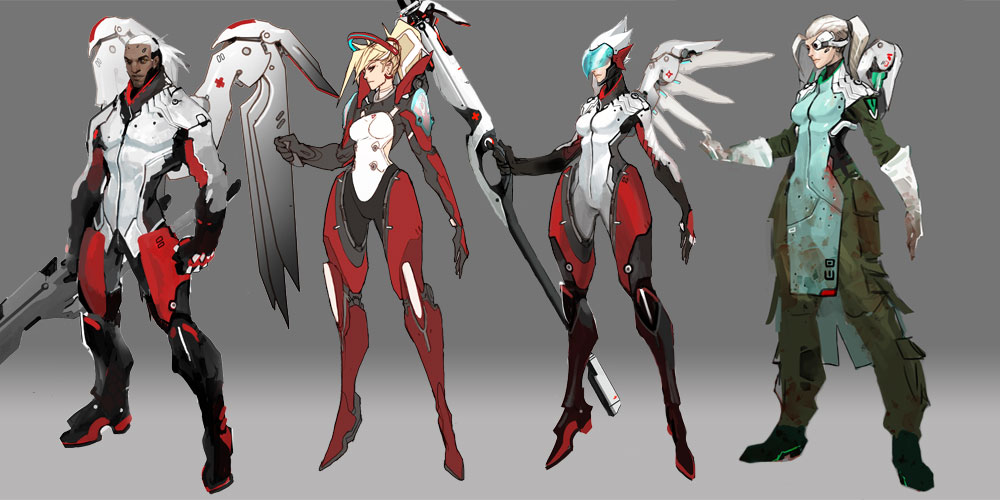 Perhaps Mercy concepts could be legendary skins in the future?

The team at Overwatch also explained that Dr. Zeiger isn’t just a random doctor’s outfit to unlock; it’s a symbol of Mercy’s past. Born Angela Zeiger, she pursued a career in medicine after her parents were killed while volunteering at a hospital during the Omnic Crisis.

After earning two medical degrees, Zeiger joined the Overwatch program, where she would eventually engineer the Valkyrie swift-response suit the character wears now. More is explained on that in the short story video that just released.

This suit is what gives her the ability to close the distance towards allies that require healing quickly.

The feature by the Overwatch team beautifully shed some light on the fascinating history of the Mercy character and gave fans an idea of what goes into character/hero design for a game like Overwatch.

Mercy’s Recall Challenge is still available to play, and earn rewards in, until December 2nd.