Some members of the Overwatch scene are so tired of support hero Brigette that they even created a fake statement from developer Jeff Kaplan, which claimed that Blizzard is deleting her from the game entirely.

Twitter user Froztaine uploaded an image of an alleged statement of Kaplan’s from the Overwatch community forums. The post found its way to Reddit, where it gained the title, ‘[BREAKING] devpost on forums confirming that Brigette will indeed be deleted in the next patch.’

The ‘devpost’ in question alleged that Brigitte would be removed from Overwatch completely, following complaints from a player named Cavalry.

Additionally, the post held that players who spent over 60% of their playtime with Brigitte would see their accounts wiped, experience withheld, and even their hardware completely banned from all Blizzard services. 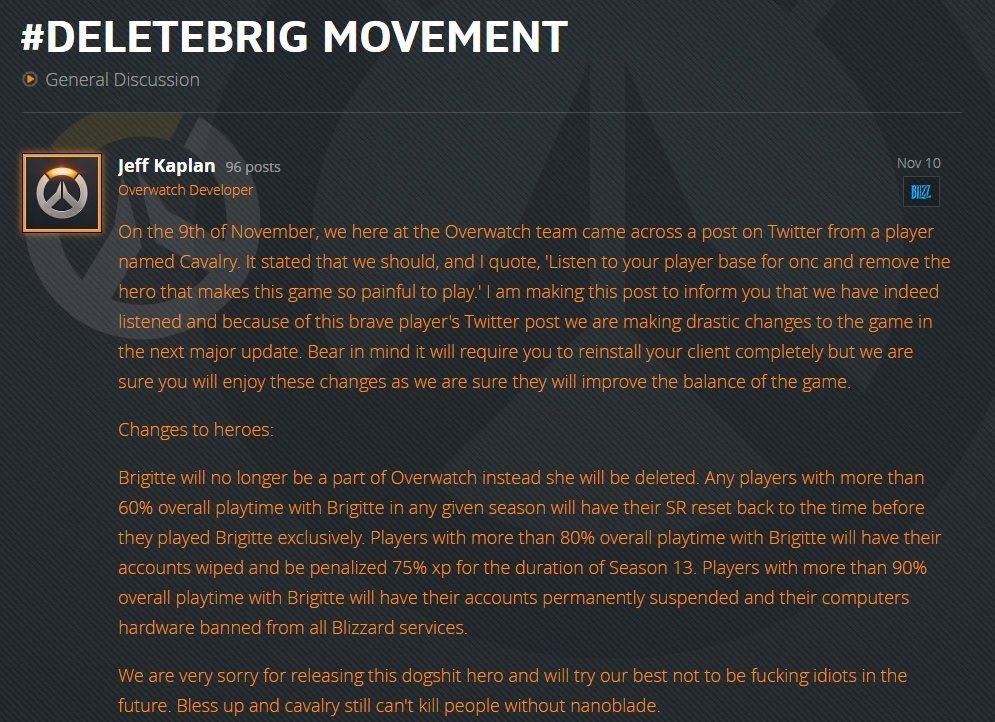 The post was so convincing that a few commenters expressed disappointment that the statement wasn’t real, after all.

“I thought this was legit, and my depression was temporarily cured until I realized it wasn’t,” one user said.

This newest addition to the #nerfbrig movement follows a statement made by Overwatch developer Joshua Noh on the character, who claimed that Brigitte is currently ‘defining’ the meta of the game ‘quite a bit.’

Additionally, Noh claimed that Brigitte helps to counteract dive, and even feels that Overwatch is ‘more balanced now than it’s ever been.’ It looks like those calling for nerfs to the character will just have to hold out in the interim- or get on a counterpicking spree.