Overwatch Game Director Jeff Kaplan was forced to respond after a player did some digging into a controversial matchmaking patent.

Overwatch player PrototypeOW made waves on social media on September 21 after posting about a concerning patent he had come across that belongs to Activision-Blizzard.

The matchmaking patent is controversial because, according to PrototypeOW, it puts players who are of a lower skill level on teams with players better than they are in order to make matches “as even as possible.”

He also stated that the patent allows Blizzard to “retain small pieces of data (i.e. voice-chat use, chat use, rage-quitting) in conjunction with actual performance to put you in games with even chances.”

the matchmaking patent states that worse players are put on the same team as players more skilled than themselves to make games as even as possible. this is done to retain players, and according to the data in the patent, it works.

This all said, while there is no indication that this system is used with Overwatch, that didn’t stop a thread with Prototype’s findings to be posted on Reddit.

As players discussed the pros and cons of the system and if it was actually affecting Overwatch’s matchmaking, Jeff Kaplan stepped in to set the record straight.

“Overwatch does not use any analysis of chat (voice or text) for matchmaking,” he explained. 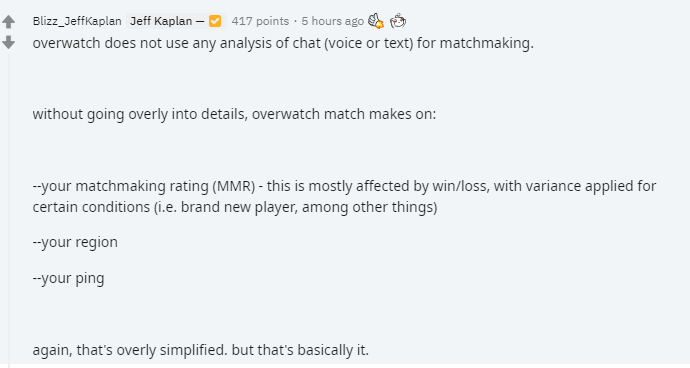 “Without going overly into details, Overwatch match makes [sic] on: your matchmaking rating (MMR) – this is mostly affected by win/loss, with variance applied for certain conditions, your region, your ping. Again, that’s overly simplified. But that’s basically it.”

However, the comment didn’t sit too well with Prototype who further remarked on Twitter that Kaplan had purposefully avoided mentioning “winstreaks/loss streaks/ aspects of gameplay itself influencing the quality of your matches.”

“This all but confirms my theory of there being a hidden ‘player quality’ factor,” the Grandmaster-ranked player stated.

Update: Jeff replied to a reddit thread about my posts, and he denied that chat has any influence on mm, but he said nothing about the other claims I made, like the ones about loss/winstreaks and overall gameplay quality influencing matchmaking. This points to this being true IMO

It’s an interesting point and suggests there could be some truth to Overwatch’s matchmaker purposefully putting weaker players on teams in an effort to balance out the game.

However, at least it’s good to know that things like voice chat don’t play a role when it comes to determining how teams are assembled and matched.