Has GOATS actually been beneficial to competitive Overwatch? - Dexerto
Overwatch

Has GOATS actually been beneficial to competitive Overwatch?

With a big update and a new hero on the way next week, some people in the GOATs, as fans of Overwatch League and Contenders probably know by now, is basically a team composition made up of three supports and three tanks.

Veteran Overwatch caster Andrew ‘ZP’ Rush said on March 13 he thinks that because of GOATs the overall skill ceiling for high-level players has gone up, which should make for better Overwatch once DPS heroes come back to the meta.

GOATS has been the predominant composition in high-tier competitive Overwatch for several months.
[ad name=”article2″]

ZP, who’s been casting Overwatch since the game’s closed beta all the way back in 2015, has seen plenty of metas come and go.

“The legacy of GOATS / 3-3 will be felt for a long time after the current meta passes,” ZP tweeted on March 13. “The overall skill level of comp OW has been forever increased because of forcing players to value positioning and cooldowns more than ever before.  This levels up players even after a meta shift.”

This skill level increase will result in much cleaner competitive Overwatch after GOATs is long gone and players have moved on to a different meta, he argued.

“Players aren’t suddenly going to forget all the lessons they’ve had to learn in 3/3 about using abilities and combos in an intelligent manner,” he claimed. “The difference will be a much crisper brand of OW.” 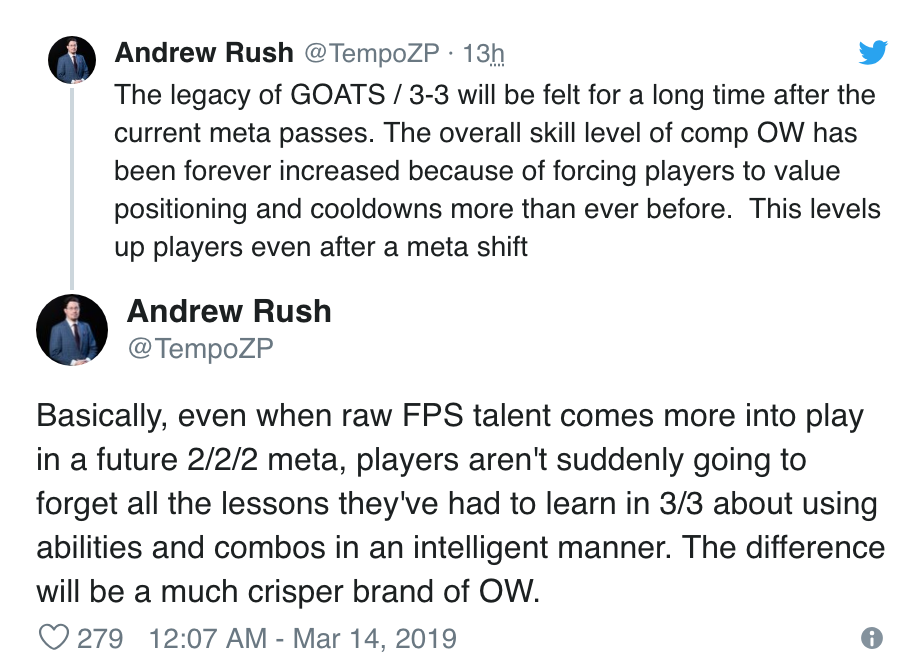 Fellow Overwatch caster Brennan ‘Bren’ Hook said he agreed with ZP, and a large number of Overwatch fans also seemed to think he might be onto something.

The game’s newest hero, Baptiste, and a significant amount of hero updates are headed to Overwatch on Tuesday, March 19 from the PTR, updates some have argued could move the game away from the GOATs meta.

Whether or not the upcoming patch actually “kills” GOATs or not remains to be seen, but there are plenty of Overwatch fans and players who wouldn’t mind another meta dominate the game for a change.