Does Pharah need another buff in Overwatch? - Dexerto
Overwatch

Does Pharah need another buff in Overwatch?

Some Overwatch players thing Pharah might be about due for a buff to her mobility, but others think changes to the hero might be unnecessary.

Pharah has basically had the same movement mechanics and abilities with her jetpack since Overwatch released in 2016.

Compared to other heroes, like Sigma or Baptiste, Pharah is widely considered to be in a pretty stable spot at the moment, but some players think she’s due for an upgrade.

Pharah’s movement hasn’t changed too much since she was released along with Overwatch in 2016.

Reddit user Getmo_ritz suggested devs should consider adding a way for Pharah to better control how much thrust she receives from her boosters, similar to how D.Va’s work.

“My suggestion is to modify the thrusters to behave more like Dva’s, not to provide more control over directionality, but to allow the player to control the distance of the thrust,” Getmo wrote. “By making the thrusters a hold-to-use ability (or tap-to-stop), players can stop their momentum when they want to, giving them the opportunity to better utilize vertical cover.” 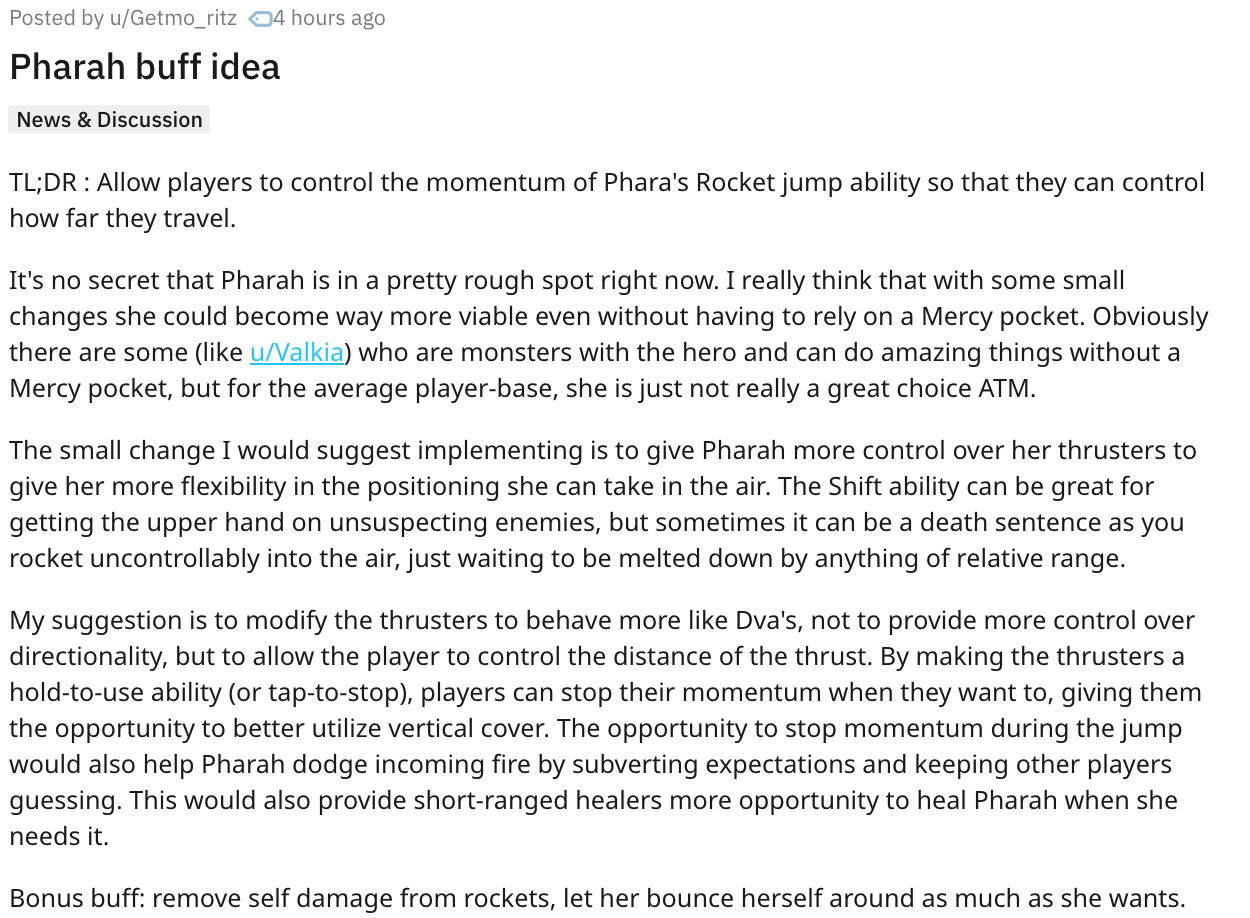 But while Gitmo does raise some interesting ideas and things to think about for the hero, others weren’t convinced Pharah really needed such drastic changes.

“Pharah would decimate low levels if she were buffed any more,” user the_shven replied. “She’s not particularly strong currently, but she’s not weak either. She is a high risk/reward character.”

Again, there haven’t been many complaints about Pharah lately as opposed to characters like Symmetra or Sigma, but she was one of the least-picked heroes during the opening weekend of Overwatch League Season 3.

Pharah was the second least picked DPS hero, only beating out Bastion in Week One.

Overwatch developers have said they’ll take Overwatch League pick rates into consideration when deciding which heroes to update in the future, but whether or not Pharah would qualify yet for any drastic changes remains to be seen.